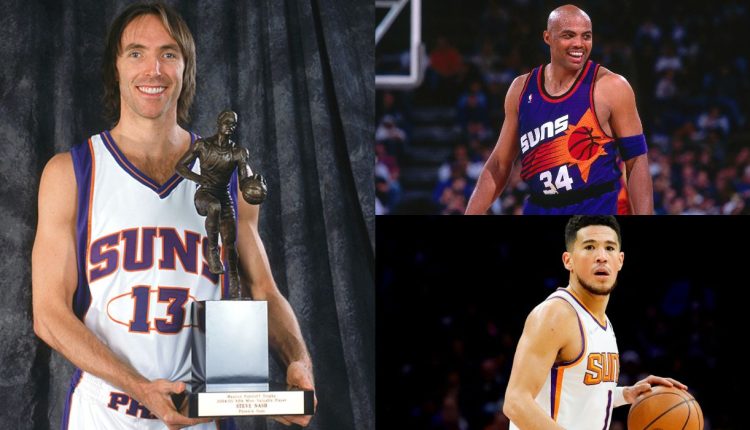 The Phoenix Suns are one of the NBA Teams still searching for their first NBA Championship victory. They entered the NBA in 1968 and have had their fair share of winning seasons. Unfortunately, they have never gotten over the hump to win it all, but they have had quite a few great talents.

Certain names created legacies that are beloved and respected by the entire Suns fan base. Phoenix has showcased some of the best players of their era, along with names that were more loved as a role player. Regardless, all the names involved have been synonymous with Sun’s basketball. The following Phoenix players deserve to be called the best in franchise history.

THESPORTSTER VIDEO OF THE DAY

The five-year stint of Jason Kidd with the Phoenix Suns saw him becoming arguably the best point guard in the NBA. Kidd made four All-Star appearances and received three all-NBA team selections to show how high he ranked compared to others.

Phoenix trading away Kidd turned out to be a bad move when Stephon Marbury was a downgrade. Kidd achieved more playoff success with the New Jersey Nets to make that place fans first think of with his career, but the Suns had some of his best years.

Chris Paul has only spent a few years with the Phoenix Suns so far, but he has made a huge impact. Phoenix has delivered two of their greatest regular season performances since Paul joined the core that had not even made the postseason without him.

Both first seasons for Paul featured All-Star and all-NBA appearances continuing his legendary run as a point guard. The Suns made the NBA Finals for the first time in nearly three decades with Paul as the game changer giving help to Devin Booker.

The Phoenix Suns witnessed Tom Chambers becoming a major part of their team in the late 1980s and early 1990s. Chambers became a pivotal part of the core with his best season featuring a shocking 27.2 points per game.

Phoenix had Chambers on the roster for three of his four career All-Star appearances. The Suns viewed Chambers as one of their most reliable players when on an upswing. Chambers even managed to receive two all-NBA selections at the peak of his career.

The Matrix nickname for Shawn Marion summarized his ability to get all over the court. Marion was considered a valuable two-way player that helped the Phoenix Suns mid-2000s era of success work with a smaller and faster lineup.

Marion was tasked with taking on every pressure by defending players of various positions and having to help Steve Nash lead the offense in an unselfish manner. The Suns tenure saw all four All-Star appearances and both all-NBA selections coming with the squad before falling off after leaving.

Paul Westphal is a rare instance of someone having successful stints with the Phoenix Suns as both a coach and a player. The playing career of Westphal featured his best success in Phoenix making four All-Star appearances and receiving four all-NBA selections each.

Westphal deserves a lot of love for his coaching tenure as well, leading the Suns to the 1993 NBA Finals. Any longtime Phoenix fan will ultimately think of Westphal among the most important figures for having two drastic levels of success.

The Phoenix Suns trusted Kevin Johnson to be one of the most important figures in franchise history. Johnson rarely put up superstar stats, but his presence helped the Suns during arguably their best time as a contender.

Phoenix retired Johnson’s jersey after his long stint with the franchise ended with four All-Star appearances and five all-NBA selections. Johnson felt like the perfect piece to pair with Charles Barkley that continued his run even after Barkley’s departure.

Amare Stoudemire was a risky draft pick by the Phoenix Suns taking a player out of high school in the lottery. Phoenix ended up finding huge success with Stoudemire as the team’s best scorer when Steve Nash joined the franchise.

Even though Nash and Mike D’Antoni were more responsible for the fast-paced innovative offense, the Suns needed Amare to step up scoring for it to work. Stoudemire was one of the best at his position in Phoenix with five All-Star appearances and four all-NBA selections.

The career of Devin Booker is still going, but he’s already in the top tier of all-time Phoenix Suns players. Booker is now entering his eighth season with the Suns to make his tenure longer than most other names on the list despite now entering his prime.

The on-court success of Booker was always there despite the lack of team results, as seen with him scoring 70 points for a shocking career high. Phoenix made the 2021 NBA Finals with Booker as their best overall player. Time will see these numbers go up, but Booker currently has three All-Star appearances and one all-NBA selection.

The Phoenix Suns franchise changed when Steve Nash joined in free agency after a great Dallas Mavericks stint. Phoenix actually drafted Nash years prior, but this was the first time he held great relevance joining them and becoming a superstar.

Nash led the Suns from a secondary playoff team fighting to stay in, to a title contender often contending for the one seed. The two MVP Awards stood out even above the six All-Star appearances and five all-NBA selections to show how much he impacted the game.

Charles Barkley only spent four total seasons with the Phoenix Suns, but he was a superstar for the entire stint. Phoenix made a big move acquiring Barkley when the star player wanted to be moved from the Philadelphia 76ers.

The MVP Award for Barkley and 1993 NBA Finals appearance saw his team putting up the best fight that any West team did against Michael Jordan in the finals. Barkley was among the best players in the world every season in Phoenix with an All-Star appearance and all-NBA selection every year.