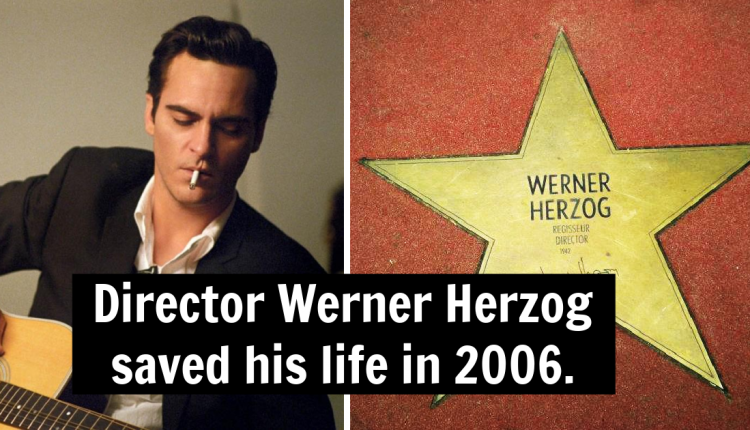 It’s no secret that eccentric and somewhat reclusive actor Joaquin Phoenix came from unusual beginnings and has struggled along the way to shake the darkness that lurks in his past.

You may not be aware just how much tragedy dogged his heels from childhood, though, and these 10 facts should shed some light on just how much he has overcome.

The Phoenix family has a history of struggling with addiction, and even before his brother River died from a heroin overdose their father, John, struggled with alcoholism.

In 2005, Joaquin entered rehab for the same trouble.

“It was while filming Walk the Line that I became aware of my drinking. I wasn’t an everyday drinker, but I didn’t have anything else to do, anything to hold me down. I was leaning on alcohol to make me feel OK. That’s what it really was.”

The Phoenix kids grew up playing music together, and as teenagers, Rain and River formed a band called Aleka’s Attic. They snagged a major record deal in the 90s and recorded their debut album, and even after River’s death, Rain told The Guardian that she hoped to release it and donate the proceeds to charity.

“I wanted to put the record out and give the money to charities my brother felt strongly about, but I came up against some of the musicians who also played on it, wanting a lot of money for it, so I shelved it.It was meant to be something that was really beautiful, not about money. I was very happy with the way I finished it, and I love the music. I hope that one day I can release it.”

The movie was hard to shop for many reasons, from Joaquin’s onscreen drug use and oral s^x to his verbal abuse of his assistants, with some reporting that buyers were completely aghast.

In January of 2020, Phoenix said on 60 Minutes that his family was “so removed from the kind of the entertainment world” that they hadn’t known how famous River had become” – a fact that made the sensation of his death even harder to bear .

“River was a really substantial actor and movie star, and we didn’t really know it. …There are helicopters flying over. There are people that are trying to sneak onto your land. It felt like it impeded on the mourning process.”

His parents are still grieving, as any would be after the loss of a child.

The cult the family was a part of what was as^x cult known as Children of God, and the exposure to s^xual behavior at young ages damaged their children in many ways.

River Phoenix told his biographer about his experiences in it, and you’ll need a strong stomach to read about them, to be honest.

“Children as young as three were encouraged to ‘play’ sexually with their parents and other adults… But even greater emphasis was put on the children stimulating each other; they could pair off for sexual exploration at night, after prayers but before bed.”

River Phoenix reportedly regretted his experiences there, which began with other children by the age of 4.

They lived in a commune when the children were small, and Joaquin’s father, John Bottom, was part of the hierarchy of a cult.

The family lived in San Juan, Puerto Rico, and lived on the street begging for change, then resettled in Caracas, Venezuela.

There they also lived in poverty while preaching the cult’s message, their residence an infested slum that had no toilet.

River Phoenix, Joaquin’s older brother, overdosed outside of the Viper Room when he was young and at the pinnacle of his fame. He reportedly first experimented with marijuana on the set of Stand by Me, but unlike fellow actor Corey Feldman, Phoenix’s drug use quickly spiraled out of control.

Bob Forrest, former frontman of Thelonious Monster and a close friend of River’s, talked about their daily drug habits.

“The drug routine stayed pretty consistent for all of us. First, smoke crack or shoot coke directly into a vein for that ninety-second, electric brain-bell jangle. Then shoot heroin to get a grip and come down enough to be able to carry on a conversation for a few minutes before you start the cycle again.”

The cult the family was part of, The Children of God, did not pay their missionaries.

As the family followed the leader across the Americas, the kids became street performers, busking for money.

They were all talented singers.

On that fateful night in 1993, Joaquin and his sister Rain were both at the Viper Room in Los Angeles with their brother when he overdosed.

He reportedly knew something was wrong, and it was 19-year-old Joaquin who made the 9-1-1 call while Rain sat on her brother’s chest in an attempt to control his seizures.

In January of 2006, Joaquin Phoenix ran off the road in the Hollywood Hills.

His car rolled off a cliff, leaving him injured and disoriented.

Luckily, director Werner Herzog was in the car behind him and saw the whole thing.

He helped pull Phoenix from the wreckage and then stopped him from lighting a cigarette near loose gasoline, probably saving his life.

It’s incredible to realize how different backgrounds cause each of us to become the very individual people we are as adults.

That said, I don’t wish an unstable childhood on anyone, even if stardom and wealth are waiting in the future.