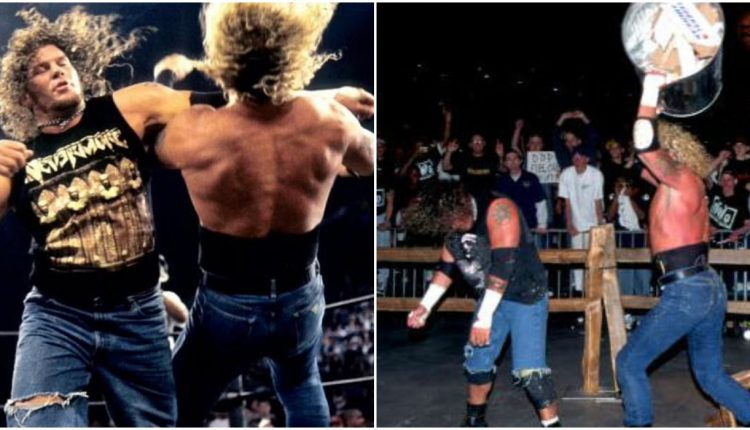 WCW saw Diamond Dallas Page and Raven having one of the most underrated rivalries in company history. Page was one of the few wrestlers to work with both established main eventers and the credible mid-carders during his WCW tenure. The boost was huge for Raven to work with a relevant top face shortly after DDP feuded with top name Randy Savage.

Raven and Page had strong chemistry in the ring and as characters that had fans buying into their feud. Multiple moments outside of the ring allowed them to sell the feud and create interest in their matches. WCW gave them multiple months to truly create interest in each match and pay off the ending. The following things get overlooked in a tremendous WCW rivalry of Raven vs DDP.

10 Raven Won United States Championship To Drop It To Goldberg

The United States Championship became part of the feud between Diamond Dallas Page and Raven. Both wrestlers were among the most respected mid-carders and made the title feel more important in their matches.

Raven winning the belt seemed like a huge victory in the feud, but it was revealed that Goldberg would get a title shot one night later. WCW mostly booked the title change for a heel to win the gold and immediately put over Goldberg for his first title in wrestling.

WCW secured a strong partnership with MTV to have a couple of themed events on the music network. MTV’s Ultimate Video Bash featured WCW wrestlers representing music videos and competing in tournament fashion.

An outdoor setting on a rainy day ruined the entire concept with poor working conditions making it impossible to wrestle. The wrestlers cut promos instead of wrestling matches with Diamond Dallas Page winning the entire thing. Raven tried to attack DDP on the same to add more intensity to their WCW feud.

THESPORTSTER VIDEO OF THE DAY

An underrated aspect of the feud between Diamond Dallas Page and Raven was that many smaller things bonded them together. Both wrestlers had entrance themes that were rip off themes inspired by the band Nirvana.

WCW tried to sample popular songs with enough differences to avoid a lawsuit. DDP came out to a version of “Smells Like Teen Spirit” and Raven had a modified version of “Something in the Way.” It wasn’t mentioned on WCW television, but the diehard fans picked up on it linking them.

7 WCW Sold Magnetic Figures Of Them Together

WCW often branched out to create unique action figures with different themes that would create new interest. Diamond Dallas Page and Raven were selected to be one of the rivalries picked of the two-wrestler packs sold in stores.

Other pairings included Hulk Hogan & Goldberg, Lex Luger & Bret Hart, and Chris Jericho & Dean Malenko for fans to choose from. Avid WCW viewers had a hard choice, but many picked the DDP and Raven set due to how impressive their feud was.

6 All Major Matches Were No DQ

WCW essentially made it all hardcore wrestling for the feud between Diamond Dallas Page and Raven. ECW and WWE’s Attitude Era pushed the envelope moving forward, and WCW tried to keep up with feuds like this.

The feud included a triple threat match, which had all competitors brawling all over the venue. Raven’s Rules and a Bowery Death Match were the other stipulations that allowed Raven and Page to get away with using weapons in creative fashion every time.

Raven had a lot of similarities in his feuds with Tommy Dreamer in ECW and Diamond Dallas Page in WCW. Both wrestlers were the ultimate face characters and choice of the people when feuding with Raven’s heel persona.

The background of the Raven vs Page feud featured Raven claiming they had a deep background as friends turned enemies. ECW allowed Raven to come up with his feud for Dreamer going back to their childhood. Both feuds had the influence of Raven trying to add a personal touch to put it over the top.

WCW pushing Chris Kanyon as Mortis saw him working for years under a mask. However, it was better for him to ditch it and show his face when moving forward showing more signs of himself. Kanyon introduced himself at the end of the Raven vs Diamond Dallas Page feud.

The masked Mortis entered after their cage match and hit Raven with a chair while handcuffed to the cell. Mortis unmasked as Kanyon to instantly place Raven in a new feud after his time with DDP came to an end.

WCW kept Diamond Dallas Page and Raven away from each other for quite some time after their first series of matches. Their only other time working together afterwards in WCW featured them facing off in tag action.

Raven formed a team with Perry Saturn and entered a short-term feud with The Jersey Triad of DDP, Chris Kanyon and Bam Bam Bigelow. Benoit and Dean Malenko also joined the feud during that time period in 1999 to boost the tag division.

TNA signing both Diamond Dallas Page and Raven to short-term deals in the early years saw them picking back up the feud. The usually interesting dynamic between the two took a hit when TNA tried to add a third party to the program.

Erik Watts was a failed wrestler from WCW and WWE to receive another chance in TNA. Raven and DDP claimed that Watts was part of their background as well, but it just added confusion to the program. TNA ruined the fan appeal of Page and Raven picking back up their feud.

WCW’s relationship with MTV allowed their talents to appear on some of their shows. TRL was a popular show hosted by Carson Daly with various guests appearing every episode. Diamond Dallas Page was being interviewed on the same episode as the Foo Fighters.

Raven blindsided him with an attack culminating with a DDT through a coffee table. The Foo Fighters looked on in shock as Raven got the better of Page. A major segment like that coming on MTV added a lot of importance to their WCW work afterwards.

The 10 Best WCW PPV Sets of All Time

Joey is a writer with a decade of experience writing about sports, entertainment, and pop culture. Pro wrestling is his strongest passion with a lifetime fandom and countless live shows attended.