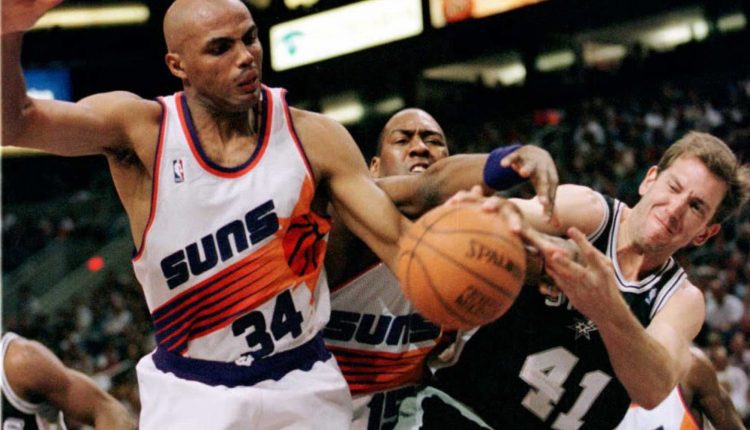 This season the Phoenix Suns will wear the same uniforms once worn by legend Charles Barkley. So, who wore them better?

This season the Phoenix Suns will be celebrating the 30-year anniversary of the legendary 1992-93 squad by wearing their timeless uniforms once again. Suns center Deandre Ayton looks absolutely thrilled to be rocking these majestic throwback jerseys, and I am too excited to see he and his teammates wear them at Footprint Center this season.

Ayton wasn’t even born yet when the 1992-93 Suns, led by then league MVP Charles Barkley, proudly wore those jerseys. The Footprint Center was at that time the newly-constructed America West Arena, whose namesake was an airline that went out of business 15 years ago. Frank Sinatra had one of his last concerts there in December 1993. There were only 50 websites available on the internet.

And on that very court, Barkley’s Suns lost to Michael Jordan and the Chicago Bulls in the series-deciding game six of the 1993 NBA Finals. Jordan averaged 41 points, 8.5 rebounds and 6.3 assists per game as he led the Bulls to their third straight NBA Championship.

While those Suns lost the NBA Finals, they won the hearts and minds of fans everywhere. The late, great Paul Westphal devised an offense that was far ahead of the NBA’s time in his first season as head coach.

Barkley spearheaded Westphal’s innovative offense as a point forward, with Westphal deploying him as a ball-handler to push the pace as quickly as possible. Sir Charles won the MVP in this unique role, averaging 25.6 points, 12.2 rebounds, and 5.1 assists per game.

Game five of the 1993 Western Conference Finals against the Seattle Supersonics was perhaps his most epic masterpiece in that historic playoff run.

Barkley is so good as an NBA commentator on TNT that many NBA fans forget how good he was as a player. His running mate was point guard Kevin Johnson who, in averaging 16.1 points and 7.8 assists per game, routinely defied the laws of physics with his jaw-dropping athleticism.