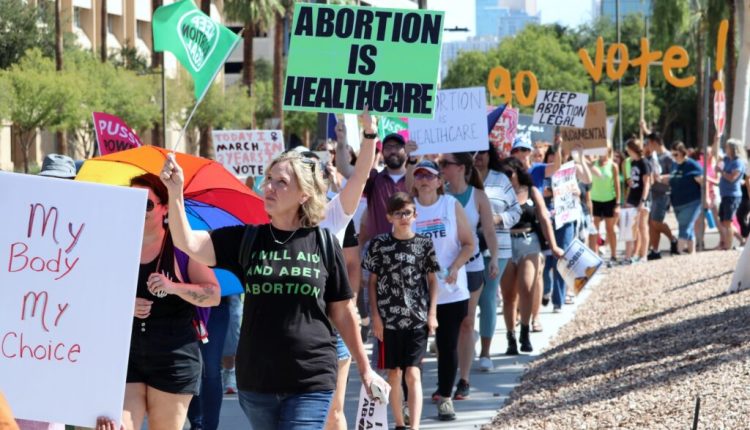 An initiative to protect abortion access planned for the 2024 ballot may face an uphill battle if voters approve a series of initiatives this year that critics say make it easier for legislators to reject citizen-led changes.

Just weeks after the Roe v. Wade ruling was leaked in early May, Arizonans for Reproductive Freedom launched an initiative for the 2022 ballot to codify abortion protections in Arizona. But with less than two months to gather hundreds of thousands of signatures, the group failed, and has now set its sights on the 2024 election.

But the path to the 2024 ballot is threatened by three measures on the 2022 ballot placed there by Republican state legislators that will introduce new hurdles for Arizonans hoping to pass their own laws if voters approve them this month.

Proposition 128 would allow legislators to change or entirely repeal voter-approved initiatives if any part is deemed unconstitutional by either the Arizona Supreme Court or the U.S. Supreme Court. Currently, the legislature is prohibited from doing so under the Voter Protection Act, unless their changes “further the measure’s purpose” and there is a 75% agreement in both legislative chambers. If Proposition 128 is passed, those protections would be nullified.

Amy Fitch-Heacock, spokeswoman and cofounder of Arizonans for Reproductive Freedom, said the new standard would allow too much room for subjective rulings, especially given how both the legislature and the courts have opposed citizen-led movements to enact change in the past. An initiative aiming to overhaul election and campaign finance laws underwent a back and forth process in the courts in August before being ruled ineligible for the ballot, and supporters blamed political lobbying against the measure and a stacked conservative court.

Fitch-Heacock worries that disagreement with the goals of an initiative could incentivize either camp to declare it unconstitutional.

“Proposition 128 would basically give the state legislature the opportunity to rewrite language in a citizen-led ballot initiative if a court finds that any portion — any wording — in that ballot initiative could be deemed unconstitutional,” she said. “That’s a very subjective ruling, and we know that Arizona courts continue to be hostile towards citizen initiatives. Essentially, it would just give legislators the ability to rewrite what citizens are saying that we want.”

Proposition 129 seeks to limit ballot propositions to a single subject, which critics say would force citizens to put forth several initiatives to address one problem. That’s a cost prohibitive effort for citizen-led groups who must shoulder the costs and petition the public for support for each one — unlike legislators, who are paid to propose as many laws as they’d like.

“Our original ballot initiative wouldn’t be able to exist… because it looked to protect reproductive freedom, which was everything under (that) umbrella,” Fitch-Heacock said. “It was a very encompassing ballot initiative, and if Prop. 129 passes, we will have to rewrite each line of that and bring separate ballot initiatives to protect each piece.”

The language of the reproductive rights initiative submitted in May is four paragraphs long, and sought to guarantee every individual a “fundamental right to reproductive freedom,” which it defined as power over all matters relating to pregnancy such as prenatal care, childbirth, postpartum care, contraception, sterilization, abortion, and decisions made about how to handle miscarriage and infertility.

It also prohibits the state or any political entities from restricting, criminalizing or interfering in anyone’s access to that health care, as well as prohibiting the restriction or punishment of doctors for providing them.

All of that would need to be sliced up into single-subject sections and couched in separate ballot initiatives, Fitch-Heacock said.

Each of those ballot initiatives would then need to earn eligibility on an individual basis, a high bar to clear. Citizen-initiated measures hoping to amend the state’s constitution must gather petition signatures of 15% of the votes cast in the last gubernatorial election. In 2022, that standard is at 356,467 signatures, but growing voter rolls and expected high turnout this year mean the requirement will be significantly higher in 2024 — and that’s without accounting for the extra signatures initiatives strive to collect to ensure they have a buffer against unverifiable or invalid ones.

Fitch-Heacock said it may take up to six separate submissions to get everything from the original proposal on the 2024 ballot if Prop. 129 is passed.

“You’re talking about having to collect 356,000 signatures… something like eight times over, in order to pass a very simple piece of legislation. It would make it nearly impossible for us to protect all aspects of reproductive freedom via voter initiative,” Fitch-Heacock said.

Proposition 132 would require initiatives that call for a tax to be approved by a 60% supermajority of voters to be enacted into law. While the abortion ballot initiative doesn’t include a tax, Fitch-Heacock said she is worried that, because contraception and childbirth are covered under Medicaid and AHCCCS, which are publicly funded, opponents could argue that it should face the the same requirements as a tax increase.

“One of the problems with the 60% majority is it opens the door, from a legal aspect, to determine what the state’s interest is economically. That is a door we don’t want to open,” she explained. “There is some fear that somebody could argue that this is a budgetary item.”

If that happens, the initiative would have its hands full trying to get at least 60% of voters to approve it, a tall order to fulfill. Few ballot measures, even those that handily win, pass with a supermajority. The legalization of Marijuana, which included a product tax, passed in 2020 with 60% of voter approval, but the Smoke Free Arizona Act, which banned smoking in most public places and included a 2-cent per pack tax for enforcement purposes, garnered only about 55% of voter approval in 2006.

Despite the challenges threatened by each of these proposals, the need for voters to be able to decide the fate of the “Right to Reproductive Freedom” amendment, as it’s been dubbed, is greater than ever, Fitch-Heacock said. The state is currently grappling with conflicting abortion restrictions that have thrown women and providers into uncertainty and increased risk, and concerning anecdotes have been shared with Arizonans for Reproductive Freedom.

One woman who escaped a violent relationship discovered she was pregnant and was considering suicide before she was informed that the state’s near total abortion ban from 1864 had been paused, which allowed her to receive care. She had previously sought sterilization, but had been denied by doctors who told her she was too young. The Right to Reproductive Freedom amendment guarantees access to both abortion and sterilization procedures.

Another woman found out at her 20-week anatomy scan that the fetus wasn’t developing properly and wouldn’t survive outside the womb. Because she was beyond the 15-week limit currently in place, she was forced to travel to Colorado to receive an abortion. The amendment doesn’t include a restriction on abortion procedures based on weeks, but rather viability, defined as the point at which a fetus is able to survive outside of the uterus on it’s own, similar to the guidelines in the now overturned Roe v. Wade.

The determination of what constitutes viability would have been left up to the doctor, not politicians.

“The goal of Arizonans for Reproductive Freedom is to restore abortion access without the type of limits that would allow the government to make a medical decision,” Fitch-Heacock said. “Every reason to have an abortion is valid and we want that decision to be made only between a physician and the patient.”

In light of all of the potential future stumbling blocks, Arizonans for Reproductive Freedom plans to meet with partners after the November election to discuss what needs to change in the revised version of the abortion ballot initiative, based on midterm results. Ideally, Fitch-Heacock said, Democrats will have retained their numbers in the U.S. House of Representatives and strengthened their majority in the U.S. Senate — increasing the likelihood of a congressional solution and lessening the need for a state specific protection.

But the conventional wisdom is that Republicans will win control of the U.S. House, at a minimum. If Democrats don’t maintain their control in Congress, and restrictions on citizen-led initiatives are passed at the state-level, Fitch-Heacock said the group and its partners are still committed to placing the abortion protection proposal on Arizona’s 2024 ballot. While she acknowledged those restrictions would complicate and change how the group’s proposal is submitted, she said there were no plans to abandon the effort.

“That will not dissuade us from filing the initiative, it will just look a little bit different,” she said.

Still, she urges voters to reject these ballot measures, warning that allowing them to become law will infringe on the ability of citizens to take part in their own governance.

“We need to kill these ballot initiatives. They make it harder to pass our own laws,” she said.