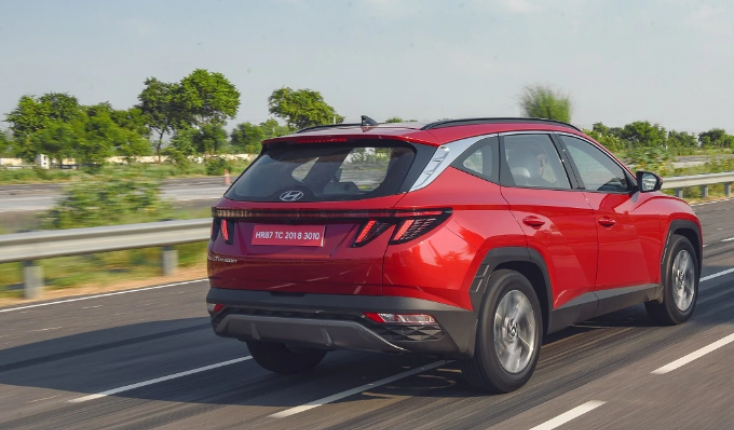 Hyundai’s Tucson enters its fourth generation with a new design, proportions, and more space within the cabin, a longer list of features and Hyundai SmartSense with Level 2 ADAS capability.

The 2022 Hyundai Tucson debuts with sharp creases as well as the dark chrome Parametric front grille that blends seamlessly with the LED DRLs. The LED treatment carries on to the headlamps and the tail lamps too. The new Tucson is 150mm longer, 15mm wider and 5mm taller than the outgoing model and the wheelbase has increased by 85mm as well. It gets 18-inch diamond-cut alloy wheels.

The interior has received a massive upgrade, complete with a digital instrument panel, a 10.25-inch infotainment screen and touch controls for the dual-zone auto aircon. There’s a long list of features including a panoramic sunroof, ventilation and heating for the front seats, an 8-speaker Bose sound system, electrically adjustable seats with driver-side memory function and more.

The new Tucson debuts Advanced Driver Assist Systems or ADAS features to enhance the safety of those within the car as well as fellow road users. We got to sample some of these features in a controlled environment to get an idea of ​​how they function.

Rear cross traffic collision avoidance assist prevents the car from reversing out into the path of another vehicle. There’s also a Safe Exit Warning that warns the occupant in case there’s a vehicle approaching from behind as they’re about to open the door.

Blind spot collision warning and blind view monitor, which comes on with the indicators, ensure you don’t move into the path of a vehicle approaching from behind. There’s a warning light on the ORVMs as well as an audible beep to warn the driver. There’s also Blind-Spot Collision-Avoidance Assist which will take evasive action in case the car determines the driver has not reacted to warnings and a collision is likely.

Lane departure warning warns the driver in case they are straying out of their lane without indicating while Lane Keep Assist makes small steering wheel corrections to keep the car within the white lines.

The new Hyundai Tucson arrives with two engine options. There’s a 156bhp and 192Nm petrol engine paired to a 6-speed automatic and a 186bhp and 416Nm diesel engine paired to an 8-speed automatic. The diesel variant also gets an AWD option. Hyundai will offer the new Tucson in two trims – Platinum and Signature. Expect the pricing of the 2022 Hyundai Tucson to fall in the Rs 25 to 30 lakh bracket. Its rivals include the Jeep Compass and VW Tiguan. Bookings for the new Tucson are open and it will be launched on August 4.