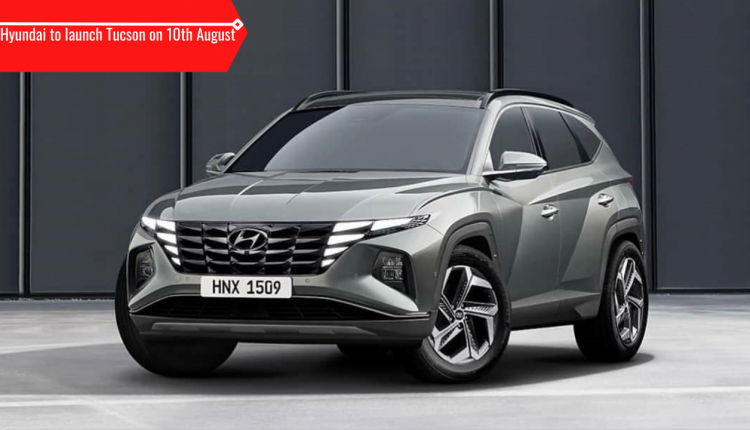 2022 Hyundai Tucson will be launched in India on August 10th.

All-new Hyundai Tucson is set to be launched in the Indian market tomorrow (August 10th). The company has already commenced the pre-bookings for its upcoming flagship SUV and the customers can get their car reserved at a token amount of Rs 50,000. The car is available for booking at all of the authorized Hyundai dealerships as well as the company website. While the order books were opened on July 19th, the company managed to garner over 3,000 bookings for the SUV within just 20 days. 2022 Tucson enters the fourth generation in India with the latest launch announcement. The new car will be a huge step up from the previous model in terms of exterior design, interior as well as features. One of the key highlights of this model will be the use of Level 2 Advanced driver-assistance system (ADAS) along with over 60 features available via Hyundai Bluelink. It will be available for sale in two variants – Platinum and Signature. On the outside, the new Tucson boasts Hyundai’s ‘Sensuous Sportiness’ design philosophy. The latest version of the car is a huge leap forward in terms of aesthetics. The front fascia of the SUV is dominated by its parametric front grille polished in dark chrome. And the front look is further complemented by the use of LED headlamps with hidden DRLs (also LED) that come finished in parametric texture. Another highlight of the front design is the use of new positioning lamps that give the car a touch of modernity. Over the side, the use of angular wheel arches, large wheels, black cladding and the prominent “Z” shaped character lines lend the car a fairly sporty and aggressive appeal. Moreover, the rear is dominated by its connecting LED tail lamps, a three-dimensional logo, a parametric pattern bumper and also a rear spoiler with an LED high mount stop lamp and shark fin antenna.

Under the hood, the car will be made available with two powertrain options – a 2.0-litre naturally aspirated petrol engine and a 2.0-litre diesel engine. While the former belts out 154 bhp of power and 192 Nm of torque, the latter develops 184 bhp and 416 Nm. The transmission options will be a 6-speed automatic gearbox (on the petrol) and an 8-speed automatic (on the diesel). Also, the car will be offered with an all-wheel-drive mode.

The new-gen Hyundai Tucson will continue to be offered as a premium SUV with sight set on cars (internationally) such as Chevrolet Equinox, Ford Escape, Kia Sportage, Nissan Rogue, Honda CR-V, and the Toyota RAV4. However, in India, there isn’t any direct rival to the car although it is classified in a similar category as the Volkswagen Tiguan and also the Skoda Kodiaq. When launched, it is likely to be priced somewhere in the range from Rs 25 lakh to Rs 30 lakh (ex-showroom). .