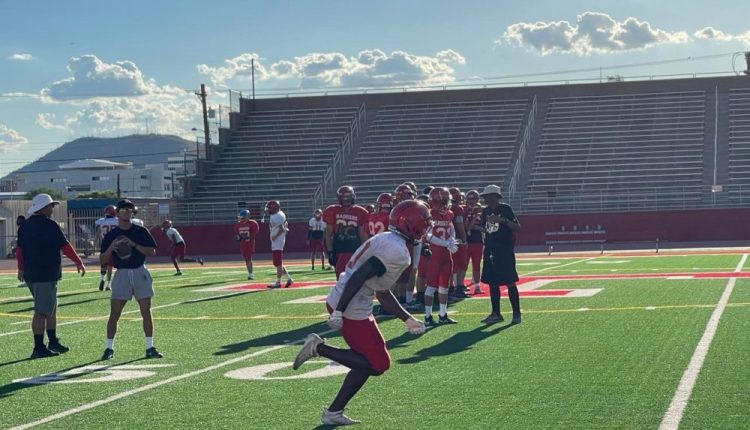 Head Coach: malcolm nelson, 1-0 first season at Tucson and overall as a head coach. He is a former defensive assistant coach with the indoor professional football team Tucson Sugar Skulls, in 2019 when Marcus Coleman what the head coach. Nelson replaces veteran coach Richard Sanchez, who stepped down from the position after one season because of undisclosed reasons. Nelson has 18 years of coaching experience mostly in arena football and has served as a personal trainer. He has worked as a high school assistant coach in North Carolina. He attended Clemson and Kent State and was a member of the football team at both schools.

Tucson’s contingent is the same as before legendary coach Richard Sanchez resigned, according to the coaches (Javier Morales/AllSports)

Note: Sanchez’s departure means that Tucson is going from one of Southern Arizona’s most experienced coaches with a career record of 162-86 (with two state titles at Sunnyside) in 22 years as a head coach to a coach in his first stint leading a program. Malcolm Nelson, who is coaching on an interim basis, said he views his role as a delegator and consultant with Sanchez’s staff, who opted to stay with the Badgers after Sanchez resigned. Many of the players have warmed up to Nelson, mentioning he is not a “micro-manager.” … Tucson won its opener 29-21 Friday against visiting Mesa Dobson, a 6A East Valley region opponent last year. The Badgers have been reclassified by the AIA to the 5A Southern starting this season. Tucson has won seven of its last eight openers. … Tucson hosts South Mountain, coached by Arizona great Byron Evans, on Sept. 23. The teams played at Tucson High last year with the Jaguars winning 26-20. … Another game of note is Tucson ending its season Nov. 10 at Cienega, which has former Badger coach Justin Argraves. The second-year Cienega coach was Tucson’s coach for 10 years before moving to the Vail school. … Tucson’s coaching staff indicated that the Badgers did not have any defections after Sanchez resigned. The program is challenged mostly by keeping players eligible and healthy.

Keep an eye out for: RB Prince Mugisha, a 5-11, 185-pound junior who has good size, athleticism and durability carrying the ball out of the backfield. With two more seasons to prosper, his future looks bright.

Badgers compete in the 5A Southern
*Region game