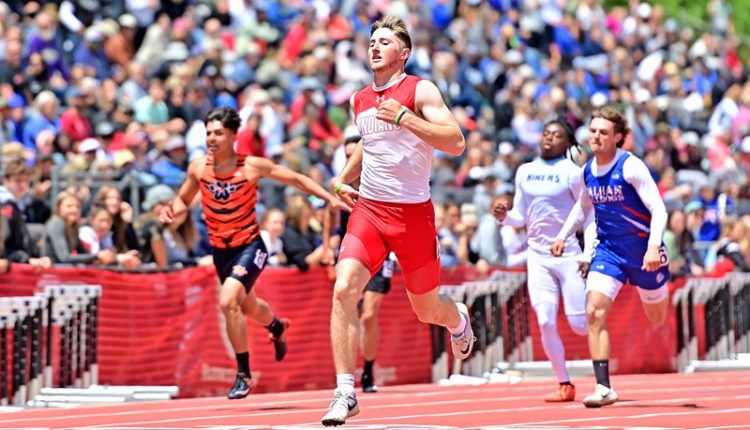 2A state track: Yuma’s Clay Robinson three-times golden and other winners on the final day

LAKEWOOD – At the conclusion of his final race as a high school athlete, Yuma senior Clay Robinson sat on a bench under the awards tent, exhaled and took a drink of water on Sunday at Jeffco Stadium.

There was satisfaction for another stellar performance, but also relief as he looks forward to his future.

Robinson capped his brilliant prep career with victories in the Class 2A 200 meters and 400 meters, along with a second-place finish in the 100 meters.

In all, he won three out of his four events this weekend (also the long jump on Saturday) and helped Yuma to his second consecutive team title. With 59 points, the Indians edged Limon (56) and Banning Lewis Academy (54) for the title.

Robinson scored 38 of Yuma’s points on his own. He just missed the perfect weekend when his time of 11.38 in the 100 was only .01 of a second behind Limon’s Gabe Schubarth.

“I’m having a lot of fun,” Robinson said. “I knew it was gonna be tough. I wanted to walk away with four (titles), but I’ll take three and a second place, so I can’t complain about that.”

A year ago, Robinson won the 100 and 200 a year ago, so he closes his career with five state titles in track and field.

During his career, Robinson was also a star in basketball and football. He was the Class 2A basketball player of the year this past season. In the fall, he ran for 1,742 yards and 19 touchdowns and threw for 455 yards and three touchdowns.

Although he has the ability to play in college, Robinson is calling it a career in athletics. Not a fan of school, he is eager to join the workforce as an electrician this summer.

“I just wanted to get started on my future, I guess,” he said. “I love athletics, but not that much to go to school for four more years.”

He will always cherish the success he had and memories he made at Yuma, however.

“I’ll always have this, regardless of anybody what says,” he said. “I can’t complain there. I’m just glad I don’t have to go to school anymore.”

In 2A girls, Cedaredge pulled away on Sunday and cruised to his second consecutive team title.

The Bruins finished with 118 points to roll past second place Dayspring Christian (71). Along the way, they won six of the 10 events contested on Sunday.

They were led by junior Kylee Terry, who swept all three sprints.

“It’s super exciting,” Terry said. “I knew I had a shot, but I didn’t think I’d necessarily win them all.”

She capped her day by teaming with seniors Megan Jenkins and Paige McGovern and freshman Jessica Black to win the 1,600-meter relay. The Bruins’ time of 4:00.69 was nearly 13 seconds ahead of second-place Limon (4:13.67). Terry was a part of three championship relays last year.

When Cedaredge won last year, Black was an eighth grader, but came to the state meet to watch her older sister, who graduated in 2021.

“Ever since then I’ve thought about being here and running,” Black said. “It’s always been my goal to win a race and I thought about it while I was watching. So it’s really cool to be here because I met that goal.”

Meanwhile, Jenkins successfully defended her 2021 title in the 300 hurdles. Her time of 44.72 seconds narrowly defeated Eboselulu Omofoma of Dayspring Christian by .08 of a second. Earlier in the day, Jenkins was second to Omofoma in the 100 hurdles.

On Sunday, she won her third consecutive title in the triple jump with a leap of 34 feet, 10 inches. Ellicott’s Aileen Gutierrez-Hermosillo was second (34-7).

Rajzer also won triple jump titles in 2019 and 2021. The COVID-19 pandemic prevented her from a four-year sweep.

While Rajzer was expected to win, Lyons sophomore Gemma Powell was a surprise winner in the 2A girls discus.

Despite coming up more than three feet short of her personal best Powell’s throw of 119 feet, 8 inches was good enough to secure her first state title. In the process, she defeated defending champion Lauren Herman of Holyoke, who was second (118-10).

In the 100 hurdles, Dayspring Christian’s Eboselulu Omofoma successfully defended her 2021 title, winning this time in 15.32 seconds.

In the boys high jump, Mason Goodwin of Mancos was the champion with a leap of 6 feet, 4 inches.

Centauri and Ouray both successfully defended relay titles. Centauri won the 400-meter relay for the second year in a while, but Ouray took the 1,600-meter relay again.