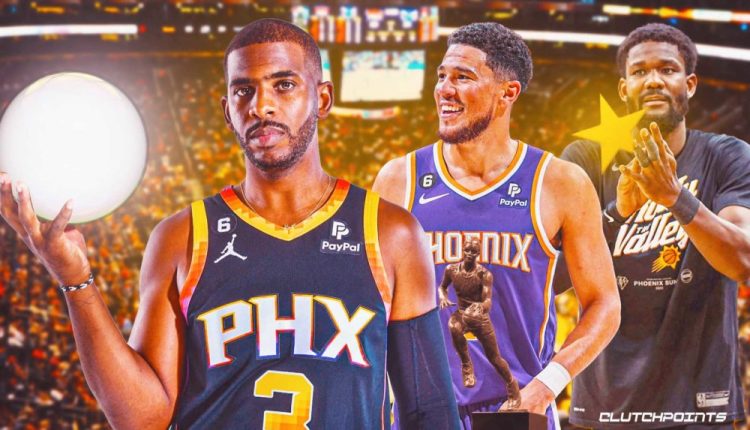 The 2022-23 NBA season is less than a week away, which means it is time for some Phoenix Suns bold predictions.

After nearly winning the franchise’s first championship in 2021, Phoenix entered last season full of expectations. The team had the best record in the league with 64-18, eight more wins than any other organization. However, the Suns lost to the Dallas Mavericks in the Western Conference Semifinals. In the series-clinching Game 7, Luka Dončić and company blew the Suns out on a 123-90 victory.

Phoenix should be trying to erase the disappointing end of the 2021-22 season. With point guard Chris Paul at 37 years old, the clock is ticking for a title with this core.

With that being said, here are three bold predictions for the Phoenix Suns in the 2022-23 NBA season.

3. Devin Booker finishes in the top three for MVP

After a couple of years full of doubts surrounding him, Devin Booker finally showed he is one of the top guards in the NBA. In 2021-22, he had perhaps his best season as a pro. He averaged a career-high 26.8 points, 5.0 rebounds and 4.8 assists, plus 1.1 steals per game. The former Kentucky Wildcat shot 46.6% from the field, a career-best 38.3% from beyond the arc and 86.8% from the free-throw line.

The league recognized Booker’s display by selecting him for his third consecutive All-Star game. He also made his All-NBA debut, appearing on the First Team.

Players in NBA History To average 25 PPG, 5 RPG and 5 APG on the best team in the league and not win MVP

As the face of the franchise, Booker ended up signing a four-year, $224 million maximum contract extension with the Suns.

Now that he does not need to worry about his contract for a long time and he is playing the best basketball of his life, it would not be a surprise to see Booker finish in the top three for the Most Valuable Player award in 2022-23 . Last season, he placed fourth with 216 votes, ahead of players such as Dončić and Jayson Tatum.

If Booker keeps up the elite scoring, not only will Phoenix succeed as a team, but he will earn even more individual recognition.

One of the biggest storylines of the summer was where Deandre Ayton would land. The big man and the Suns were unable to agree on a contract extension throughout the past season with the team reportedly being hesitant to offer a max extension. Most fans thought the last image of Ayton in a Phoenix jersey would be in the blowout loss to the Mavericks in the playoffs.

The Indiana Pacers ended up signing up to a four-year, $133 million offer sheet, the largest in NBA history. When it seemed like the center would go to Indianapolis, the Suns matched the offer.

Despite everything that happened behind the scenes, Ayton showed on the court that he is valuable to Phoenix. Last season, he averaged 17.2 points, 10.2 rebounds and 1.4 assists in less than 30 minutes a night. He also shot a career-best 63.4% from the field, plus making seven 3-pointers. Ayton had made seven 3s in all his previous seasons combined. While it is a small sample size, it shows he is working on his outside shot.

The former no. 1 pick likely has a chip on his shoulder from what happened between him and the front office. Because of that, Ayton should try to prove on the court that he deserved a big deal. Fans should expect the best year of his career, which will culminate in his first All-Star appearance and becoming one of the top centers of the Western Conference.

1. The Suns return to the Western Conference Finals

The Suns entered the 2021-22 season as one of the frontrunners for the title. Unfortunately, the team’s impressive regular season was quickly forgotten with the Game 7 contest versus Dallas. However, there are many reasons to believe Phoenix still has a lot left in the tank.

Booker is coming off his best season in the NBA. Ayton is back. Mikal Bridges is one of the best defenders in the league. Cameron Johnson became a reliable option off the bench and will now be the start in place of Jae Crowder. Even CP3, whose scoring and efficiency went down, led the NBA with 10.8 assists per game.

All things considered, a trip to the Western Conference Finals is not impossible. The Suns have talent on both sides of the floor, plus veteran leadership in Paul and the youth and energy from most of the roster. The biggest problem is their competition.

The Golden State Warriors are back as one of the top teams in the NBA. With Kawhi Leonard and Paul George healthy, the Los Angeles Clippers are instant contenders. Dallas, Memphis and Denver have MVP-worthy players that can change every game.

Based on the challenges the West has, Phoenix will impress and make it to the WCF. While a return to the NBA Finals seems difficult, a strong regular season and early postseason could be game-changing factors to fulfill the Suns’ dream of a ring.