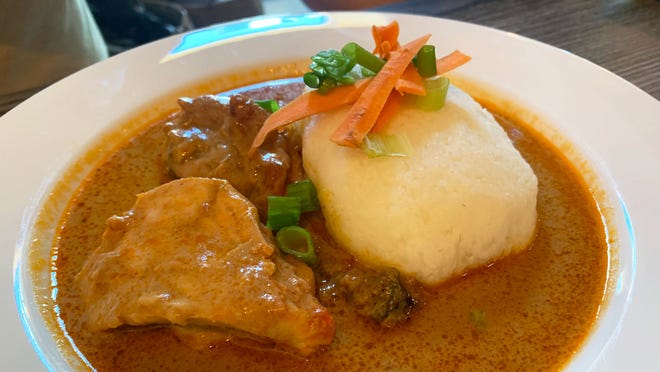 3 new restaurants in Phoenix and Tempe to try now

More than two dozen restaurants opened across metro Phoenix this August and as I compile the monthly list of new restaurants, I like to visit the places that catch my attention. Recently, three stood above the pack, serving West African comfort food, high-concept Korean fare and gourmet izakaya served on the ground floor of an art deco hotel.

I sipped peanut soup while listening to Ghanaian rap songs at West Hut. Just down the street in downtown Phoenix, I discussed sake with a bartender who served green tea-colored hard-boiled eggs stuffed with salmon roe and topped with matcha foam. And one late night in Tempe, I settled into a large booth for a showy take on Korean street food.

Among the many newly opened spots around metro Phoenix, these are the places I suggest trying first.

“If you broke, na your b’ness,” reads a sign on the wall at this lively West African restaurant near downtown Phoenix. Ghanaian and Nigerian song lyrics are posted all over the bohemian chic dining room, which specializes in “healthy, happy food” like pepper goat soup and groundnut delight. The “enjoyment zone,” aka the menu, was one of the more exciting reading experiences I’ve had in a long time. (But maybe that’s because I’m still trying to understand James Joyce.)

The dishes themselves mostly lived up to the intrigue: bold spices, lush sauces and lots of sour and spongy carbs.

Since I over-ordered, it was kind of a blur, but I clearly remember my favorite dish — the omo tuo, a silken peanut stew with bone-in chicken and a glutinous ball of white rice to soak it all up. An African staple, peanut soup appears in a number of cuisines, but here it’s surprisingly delicate despite the burn it leaves on your tongue. So, don’t miss the West African meat pies stuffed with curried beef.

New nugs:You need Thai chicken nuggets in your life. Find them at this restaurant

Tempe’s first gourmet Korean concept, Zu & Pocha is super ambitious and all over the place. When you order mandu dumplings, a server unveils a glass tray filled with campfire smoke that pours over your face as the sounds of Fallout Boy rage through the speakers. I swear, at one point they were bumping the soundtrack to “The Lion King.”

Pocha refers to a Korean style of street food where vendors set up makeshift bars under Tarps and serve cheap snacks like chicken skewers and tteokbokki rice cakes.

The menu here is serious and utilizes Korean staples in ways I’ve never seen, like Hamachi sashimi dotted with millet and drizzled with maesil plum tea.

The restaurant’s standout dish is a Korean riff on fettuccine made with fresh squid ink noodles and meaty king mushrooms in a sumptuous pollock roe sauce hit with parm. Bitter perilla leaves were julienned and plopped over the pasta, like fresh arugula might be in an Italian restaurant.

The flavors at Zu are intense, and while they don’t always work, they very much intrigue. The restaurant did just open, so I’m excited to see where the kitchen takes us as they find their footing.

Easily the most impressive building in downtown Phoenix, the historic Hotel Monroe is an art deco skyscraper that helped set the scene for Hitchcock’s legendary horror flick “Psycho.” Of course, that’s not readily apparent inside the dining room at Motomoto, a new Japanese spot on the ground floor of the hotel, now called the Hilton Garden Inn. The sister restaurant to Nanaya has a contemporary look, with the dark elegance of a Manhattan hotel bar.

In true gourmet izakaya fashion, the menu is a hodgepodge of hot items and skewers from the robata grill, sushi bites shaped into thimble-sized nibbles and ramen, done here in the paitan chicken style made from slow-cooking chicken bones to create a milky broth.

This style of ramen is getting more popular in Phoenix, and it’s a nice alternative to the creamy pork tonkotsu, the king of ramen. That doesn’t mean it’s light though. My ramen was stuffed with juicy chicken thighs and fortified with spicy miso paste.

Sure, it’s hot for this type of food, but there may have been involved’s sake to ease the transition.

After a meal here, be sure to roam the lobby of the hotel and see if you can find the photograph stills from “Psycho.”

Reviews:This spot made me love Filipino food even more — starting with breakfast