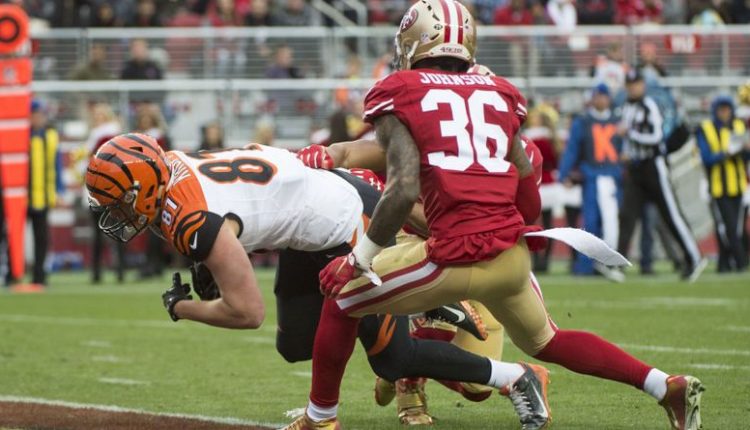 49ers News: Refreshing my page all day for practice reports and footage

“San Francisco’s voluntary portion of organized team activities began on Monday, but Samuel, who has requested a trade and discernibly not made progress with the 49ers on a contract extension, will not be in attendance, per multiple reports.”

“The video provides a quick look at Trey Lance, last year’s No. 3 overall pick, and many others.”

“We know the offense, we know what he wants,” Dedeaux said. “We use the same workouts, the same verbiage. Everything is tailored to (Lance). When he works out with us, he’s working alone. So there’s no distraction from other quarterbacks or other systems. It’s very specifically Kyle’s 49ers offense.”

Dedeaux said Lance was one of the first NFL quarterbacks to arrive when the season ended and that he’ll be back in Orange County to work on more specific tweaks to his motion when the 49ers’ spring session ends in June.

“I can’t speak any more highly about how he approaches it — he works his tail off and wants to learn, is totally coachable,” Dedeaux said. “He’s done everything we’ve asked of him.”

“Kyle Shanahan is very charismatic. And also very good at making sure football players are good at their jobs. He’s a great play designer, and he has helped Deebo Samuel become the dynamic weapon he has been. So, I think they can get it worked out, but they are not there yet.”

Albert Breer on 49ers and Jimmy Garoppolo: ‘I don’t believe the plan right now is to keep him’

“San Francisco, for what it’s worth, has had an open line of communication with Garoppolo’s camp the last few months, and both sides are willing to be flexible to find the best situation for the 30-year-old who’s led the Niners to two NFC title games over the last three years,” Breer wrote. “And that means, if a team’s out there wanting to renegotiate the final year of his contract, which has $24.8 million on it (and is not guaranteed), as part of a trade, the opportunity’s there to do it, and other teams know it.”

Peter King has 49ers at No. 10 in power rankings, predicts Garoppolo-Lance outcome

“My guess: Samuel will be a Niner this year,” King predicted. “Lance will start opening day. Garoppolo will hang around because Shanahan and GM John Lynch know the defense is so good they could win with Garoppolo if Lance spits the bit.”

“According to Max Meyer, an editorial content writer for Caesar’s Sportsbook, more money has come in on Trey Lance to win NFL MVP than Aaron Rodgers and Patrick Mahomes combined.”

Brandon Aiyuk can finally deliver 49ers a breakout season in 2022

“….could 2022 finally be the year in which Aiyuk turns into a 1,000-yard receiver and essentially breaks out as a legitimate weapon San Francisco has long coveted to pair with Samuel and tight end George Kittle?”