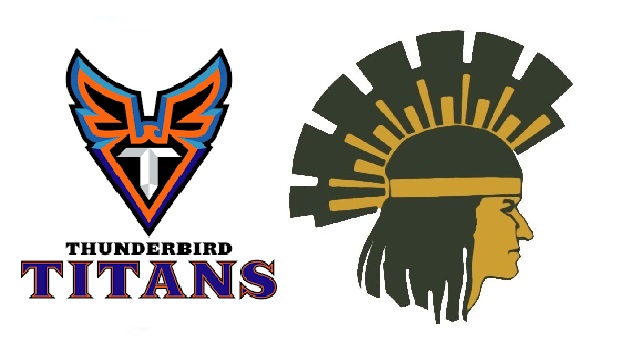 4A Quarterfinals: No. 14 Phoenix Thunderbird vs. No. 6 CDO

When Thunderbird has the ball:

Phoenix Thunderbird, who has a winning season for the first time in Matt Nalette’s four-year tenure at the school, is coming off his first playoff victory since 2012 with last week’s 17-14 upset victory at No. 3 Tempe Marcos de Nice. … Thunderbird defeated Marcos de Niza behind senior QB carter squires 219 yards passing on 14 of 21 attempts. The Titans amassed only 74 yards rushing on 24 carries. … Squires eclipsed the 2,000-yard mark this season in the win last week. He has completed 138 of 229 attempts for 2,039 yards with 13 touchdowns and seven interceptions. …RB Sean Mathews (563 yards on 102 carries with 11 touchdowns) and RB Tyler Woods (418 on 30 rushes with four touchdowns) do the bulk of the work out of the backfield. …WR Brody Fogelson (54 catches for 912 yards and seven touchdowns) is one of the leading receivers in the state. WR Alex Harland (23 receptions for 463 yards) is also a reliable receiver. … CDO LB MJ Zamorano led the Dorados with 12 tackles when they shut down the offense at St. Mary’s last week in a 13-7 victory in the first round. Zamorano leads CDO with 63 tackles (10 for loss) this season and safety Mavrick Neustadter is next with 59 tackles. … Sophomore LB Evan Greer leads the Dorados with five sacks and CB Ethan Krominga is atop the team with three interceptions.

When CDO has the ball:

CDO improved to 11-8 in the playoffs in the 14th season under Peace behind senior RB Jordan Thomas’ 104 yards on 17 carries in the win over St Mary’s. … Thomas has gained 234 yards on 35 carries since becoming eligible midway through the season following his transfer from Ironwood Ridge. … RB Jose Alba is the team’s leading rusher with 660 yards on 100 carries with six touchdowns … Junior QB Tristan McClelland has thrown for 1,202 yards completing 65 of 102 attempts with 15 touchdowns and nine interceptions. …WR Daylon Beck is one of the top big-play receivers in the state with 27 catches for 699 yards (25.9 yards a reception) with 10 touchdowns. WR Ryan Madsen is next with 17 catches for 273 yards and five touchdowns. … Mathews, also a linebacker with Thunderbird, led the Titans with 10 tackles (one for loss) in the win over Marcos de Niza last week. He leads the team with 70 tackles (7.5 for loss) this season. … Sophomore LB Ryan Kavalami has 68 tackles with an astounding 23 for loss, 9.5 of them sacks. Thunderbird has 89 tackles for loss, including 29 sacks. …CB Nate Godoy, who had an interception against Marcos de Niza, is tied for the team lead with five picks. Fellow CB Brian Costa also has five interceptions.

CDO will play Thunderbird for the first time in program history.

Buying A House In Tucson