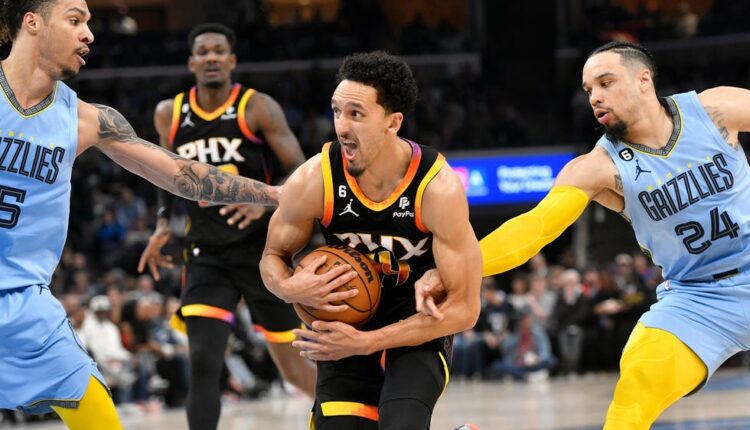 MEMPHIS — Memphis wasn’t having it this time.

The short-handed Phoenix Suns were unable to upset Memphis this time.

The Grizzlies avenged their last loss to the Suns in dominant fashion, 136-106, before a sellout crowd of 17,794 at FedExForum on Martin Luther King Day.

With the NBA’s longest active win streak at 10 straight, Memphis (30-13) hasn’t lost since falling Dec. 27 to Phoenix at home.

Here are five takeaways as Phoenix (21-24) returns home to face Brooklyn on Thursday.

Bismack Biyombo had five in 12 minutes.

Not good. Not good at all for Ayton, who averaged a double-double his first four seasons.

Everybody has a rebound radius that shows how far they can extend or go to grab a rebound or track it down. Ayton’s isn’t nearly as wide as it should be and that contributes to giving up offensive rebounds.

Memphis grabbed 13 offensive rebounds in winning the battle of the boards, 52-37. That one Steven Adams got around a standstill Ayton for a putback to put Memphis up three at the half was a big momentum boost.

Got to put a body on him. Adams only grabbed seven rebounds total, but five were on the offensive end.

Ja Morant scored a game-high 29 points to lead the Grizzlies while Desmond Bane churned out 28 on 10-of-12 shooting.

The Grizzlies led by as many as 36 points.

Looked like Phoenix was going to run past Memphis again in taking an 11-point lead late in the first quarter.

Bridges was being aggressive in going 4-of-4 in the quarter. Dario Saric and Ayton were involved and Phoenix was defending at a decent rate.

Then Morant got even hotter from 3.

The Suns wanted to keep the NBA superstar out the paint where he’s just embarrassing teams with his highlight dunks.

So they went under screens on Morant and he made them pay.

After shooting 2-of-4 on 3s in the first quarter, Morant connected on 3-of-4 from deep in the second quarter in leading Memphis to a 68-65 halftime lead.

So even with Morant, who is a career 32.4% shooter from 3 (31.3% this season), catching fire from distance, the Suns were still only down three at the half.

Then their offense deflated in the third.

Between the five turnovers that led to nine Memphis points and poor shooting (38.1% FG in the third, 1-of-6 on 3s), Phoenix couldn’t keep up with a consecutive 39-point quarter for the Grizzlies that pushed their lead to 19 going into the fourth.

Suns coach Monty Williams had Landry Shamet on a minutes restriction after he missed three games with a sore right hip.

Getting the start, Shamet ended up scoring nine points on 2-of-9 shooting (1-of-6 on 3s) in 26 minutes. Dealing with the fiery Dillon Brooks didn’t help.

Josh Okogie ended up taking an elbow to the nose from Ayton, who was fouled by Adams on the play, and didn’t return to the game.

Okogie said he’ll know more once back in Phoenix, but his nose was bruised and swollen.

He was actually playing well with nine points in nine minutes before going down late in the first half. He could’ve helped in the second half.

Along with those two situations, Williams decided to play Saben Lee instead of Duane Washington Jr., who scored a career-high 26 points on the Grizzlies in that Dec. 27 wins.

On a 10-day contract, Lee was coming off a solid 12-point game at Minnesota while Washington Jr. has been struggling with his offense (6-of-25 from the field previous two games) and with turnovers (16 total in last five games).

Lee plays physical and get into the paint, but Washington Jr. is the better scorer.

So, when the Suns were struggling to make a shot in the third, that was an ideal time to go with Washington Jr. instead of Lee to replace Shamet, but Williams went back to Lee.

Lee was solid, but Phoenix needed someone to catch fire. Washington Jr could’ve been that guy.

With that being said, Bridges and Ayton combined for 15 points in the third, but Bridges shot 3-of-11 in the quarter.

Not good, but he at least looked to score.

Ayton only attempted three shots in the quarter, made two, but also picked up three fouls.

Bridges played the entire quarter. Ayton played all but the final eight seconds of it.

The Suns shouldn’t need to wonder how Washington Jr. would’ve played when they have Bridges and Ayton.

Now granted, the Suns are down their top creators, Chris Paul and Devin Booker, but Phoenix has gone into games knowing those two are out.

Ayton was aggressive last game at Minnesota, but shot he 5-of-18.

Will the Suns get Cam Johnson (knee) back for that one? That’s as soon as he can return after having played now since Nov. 4.

Will Paul (hip) be back? He didn’t make the four-game road trip.

Say they get those two back within the first two games of the homestand as the Suns continue it against Indiana, face Memphis one final time, and conclude it against Charlotte and Dallas.

How quickly can Johnson shake the rhythm rust and how healthy is Paul?

Don’t expect Booker back until after being re-evaluated next week. Cameron Payne (foot) hasn’t even done any on-court work yet.

Phoenix is ​​now 12th in the West. If the playoffs started today, the Suns wouldn’t even make the play-in.

They have to find a winning formula that works without Booker.

Certain guys have to take the offensive lead every night regardless of whether they’re making or missing shots. Defensively, they are not on the same side.

Blown coverages. Don’t box out. Not defending the 3.

The Suns look like a team that’s lost nine of their last 10.