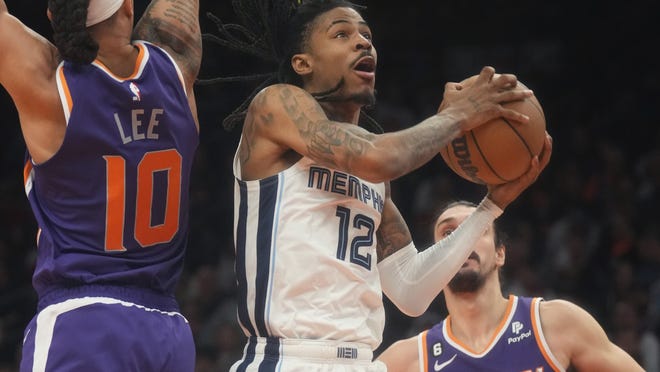 After getting rolled by 30 points less than a week ago in Memphis, Phoenix, shorthanded or not, needed to respond, win or lose, in its final regular season meeting Sunday against the healthy grizzlies.

The Suns are still without Devin Booker (groin), Cameron Payne (foot) and Landry Shamet (foot), didn’t have Deandre Ayton for a second straight game with a non-COVID illness, but Chris Paul returned after missing seven straight games with a sore right hip.

With their veteran leader back, Phoenix built a huge lead before escaping with an 112-110 win before a thrilled, but stressed sellout crowd of 17,071 at Footprint Center in the second of a back-to-back.

With the same slim advantage, Cam Johnson turned the ball over under the pressure of a trap after receiving the inbounds pass near halfcourt with 5.6 seconds left, but Dario Saric tracked the ball down to secure the two-point exhale.

Paul set the tone early with 15 first-quarter points, hitting 3-of-4 from 3.

Finishing with 22 points and 11 assists to five turnovers in 38 minutes, the All-Star point guard was sharp after being sidelined seven games with a sore right hip. Mikal Bridges paced the Suns with 24 points.

Yes Morant led the Grizzlies (31-15) with 27 points. Here are five takeaways as Phoenix continues its five-game homestand Tuesday against Charlotte.

Memphis cut what was once a 27-point Phoenix lead down to seven with five minutes to go.

Plenty of time for the Grizzlies to pull this one out, but the Suns answered with two huge baskets by Jock Landale inside and Bridges from 3 to go up 12 with 4:34 remaining.

Then with the shot clock expiring and Phoenix up six, Cam Johnson nearly lost the ball under the defensive pressure of Ziaire Williams, tracked it down and hit a jumper over Desmond Bane, who fouled him on the shot.

Johnson hit the free throw. Sun’s up nine with 1:59 left.

Then up two with 28.6 seconds remaining, Phoenix made just enough plays — and got lucky — to win.

Two weeks ago, they lose a game like that.

Paul back with changing team

Monty Williams essentially said after Phoenix’s 90-88 loss Jan. 4 at Cleveland the Suns looked for Paul to bail them out. He posted 25 points, eight assists, but played 40 minutes.

Two days later after a cross country flight to end a season-high six-game road trip, Paul went down with the hip injury in the first half Jan. 6 against Miami.

The Suns lost that one and four of their next five, but they discovered a few things.

They went from wondering why the injuries continue to add up to playing through them and rediscovering their competitive edge, especially on the defensive end.

Bridges is improving as a primary option to the point Williams doesn’t want him deferring to Paul and Booker when they return. He’s posted a career-long five consecutive games with 20-plus points.

Dario Saric and Jock Landale have a comfort zone.

And signed Saben Lee to a 10-day, a move that worked out better than they could’ve imagined. He played crunch minutes in Paul’s absence.

Then they got Johnson back Thursday against Brooklyn.

Scored 19 after missing 37 games with a torn right meniscus.

Scored 24 after missing Thursday’s game with a broken nose.

With back-to-back victories for the first time since last month, Phoenix had momentum, regained some of its swag — and now Paul returns ready to go?

The Suns won again with Paul setting the tone, but it was far from a one-man show.

Torrey Craig scored 20, Saric added 14 with final two coming on free throws to put Phoenix up four with 12.8 seconds left and Landale chipped in 12 before fouling out . The Suns did the job defensively in the first half on Morant and Dillon Brooks.

At one point late in the first half, Morant and Brooks shot a combined 2-of-13 from the field for six total points with 2:18 left in the second quarter — and Memphis down 27.

Brooks and Jaren Jackson Jr each had three fouls.

This team is too talented and proud to just quit.

Outscoring Phoenix, 35-25, in the third, Ziaire Williams hit a 71-foot heave at the buzzer to end the third and pull within 15 going into the fourth.

The arena was buzzing. The Grizzlies had some momentum.

And Bridges was clapping as he walked over to his head coach, showing the even keel Williams has been praising him for as of late.

The Suns weren’t rattled. They responded instead.

They kept coming, but Phoenix created a big enough cushion to help hold off the Grizzlies.

The Grizzlies needed a loss just to get back to restarting that drive that led to the 11-game winning streak. They came off a one-point road loss against the Lakers in a game they should’ve won.

They followed that up by falling down by as many as 29 to the Suns, but responded the way a championship contender does.

This team is young, confident and cocky.

They’re not going anywhere, either, and should remain who they are, but there’s nothing wrong with eating a little humble pie, too.

Abortion Debate Ramps Up in States as Congress Deadlocks