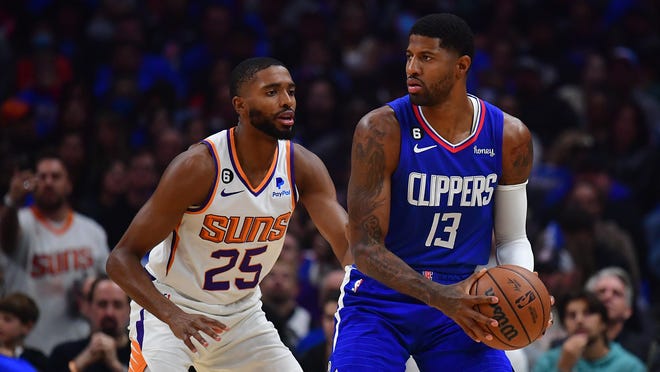 LOS ANGELES — Clippers All-Star duo Paul George and Kawhi Leonard stood center court with the spotlight on them before their home opener Sunday.

The sellout crowd at Crypto.com Arena was ready.

Then George grabbed the mic and said something to ignite the fans.

“Why not us, let’s get it this year,” George said.

The Phoenix Suns are thinking the same thing about themselves and played like it in their 112-95 win over the most talented team in the NBA and a favorite to win it all.

Devin Booker scored a game-high 35 points in leading four Suns in double figures. The Suns led by as many as 22 points and never trailed.

Deandre Ayton added 13 and Cam Johnson added 11 after missing most of the fourth quarter and overtime of Friday’s overtime loss at Portland with a right hip contusion.

Marcus Morris led the Clippers (2-1) with 22 points while John Wall added 17 off the bench. George chipped at 16 and Leonard posted 11 in 20 minutes as he continues to come off the bench.

Wall and Leonard didn’t play in Saturday’s two-point win at Sacramento in the first of a back-to-back.

Those two were rested. The Clippers were ready to give their crowd a show.

So were the Suns.

The final score shows how much so. Here are five takeaways from Sunday’s game as the Suns face the defending NBA champion Golden State Warriors on Tuesday at home.

Booker sized up his former teammate Marcus Morris Sr. with five seconds on the shot clock.

Took him left, pulled up, double clutched the ball, shot — and scored.

Yep, he went to work on the Clippers.

Scoring 18 in the first half, Booker set the tone for everyone else to follow.

Booker is always aggressive, but there are games he’s come out very aggressive and looking to score seemingly every trip.

He started Sunday’s game with that mentality in leading Phoenix to an 18-point lead in the first quarter. Booker scored 14 of Phoenix’s 33 points in the first on 6-of-9 shooting (2-of-3 from 3).

Booker didn’t stay that hot, but he stayed in attack mode.

So when the Clippers cut Phoenix’s 22-point lead to 10 late in the third, Booker didn’t hesitate to take it to the rim, absorb contact and score to stabilize the Suns.

Then Paul connected with Ayton for a lob finish for assist 11,000 with 10:49 left in first quarter.

The numbers clearly show he’s one of the best to ever distribute the ball. Only Hall of Famers John Stockton (15,806) and Jason Kidd (12,091) have more career assists than Paul.

Through three games, Paul has 32 assists. He’s been a closer throughout this career, but he’s surrounded by starters who can score.

If those other four fill it up, Paul’s role may be very well be the set-up guy. It could be viewed as him doing less, but Paul may not need to score for this team to win.

Johnson sounded ready to go pregame. He then went out and played like it.

The Suns starting four had had three separate injuries in his previous three games — right thumb sprain (vs. Lakers in Vegas), right quad cramps (vs. Mavericks in opener) and right hip contusion (at Blazers).

Johnson described the latest injury feeling “heavy” and “stiff,” but was looking to do everything he could to get ready for Sunday’s game.

Johnson was moving fluid and without limitations to start the game – and found his 3.

After going 1-of-5 from 3 on five-point Friday night against the Blazers, Johnson hit two of his first three launches from deep in scoring six in the first half. He also grabbed five boards, something Monty Williams challenged him to do going into the season as Jae Crowder was solid on the glass.

Johnson also picked up three fouls in the first half and an early fourth one to open the second half as Leonard beat him to his own miss and drew a foul on a fake pump.

Staying out of foul trouble is key for Johnson because Suns like him to play with second unit. He can defend, but keeping guys in front and defending bigger bodies will be a challenge for him.

Coming out of a game this season has been an even bigger challenge so far this season, but he did get through Sunday without another injury.

Johnson wasn’t the only one to return from injury Sunday.

Landry Shamet had missed four straight games counting the preseason with a left hip strain. His return gave the bench a scoring punch as he had eight points, hitting 2-of-5 from 3.

Before the game, Williams said having Johnson and Shamet back puts everyone in their normal spots. So Torrey Craig didn’t have to come in and look to score, but scored eight himself. He too shot 2-of-5 from 3.

The bench is still a concern, but they had their best outing as a group Sunday.

The Clippers are still the most talented team in the league and will be even better when Leonard and Paul are playing starter minutes, but the Suns had their best game so far this season against them.

Booker set the scoring tone, Paul found guys and everyone else followed their lead.

Up next, the warriors.

If they are able to come off this win and then top the defending champions, time to put Phoenix back on title contender list.

Have an opinion on the current state of the Suns? Reach Suns sider Duane Rankin at [email protected] or contact him at 480-787-1240. Follow him on Twitter at @DuaneRankin.