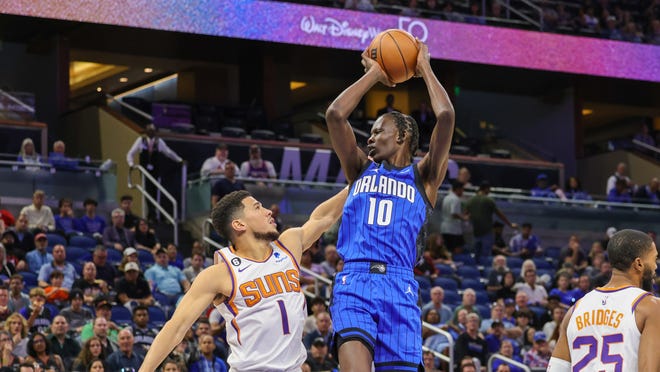 Phoenix followed one of its best performances of the season with one of its worst in Friday’s 114-97 loss to Orlando before 15,879 fans at Amway Center.

This was their largest margin of defeat this season as the Suns (8-4) trailed by as many as 21 points to the sub .500 Magic.

The Suns are now 2-3 after their five-game winning streak.

Cameron Payne paced Phoenix with 22 points in starting for Chris Paul, who missed his second straight game with a sore right heel.

The Suns were also minus Landry Shamet (concussion protocols) and Cam Johnson (torn right meniscus). Phoenix is ​​2-2 without Johnson, who is expected to be sidelined for one to two months at least.

14 and 5 not enough from Ayton

Wendell Carter Jr. and Bol Bol were the opposition.

He should’ve given them more than just 14 points and five boards.

Ayton had nine points on 5-of-8 shooting in the first half, but he fizzled out to five points 2-of-4 shooting in the second half with zero points coming in the fourth in just 4 minutes and 14 seconds of action.

He played just 26 minutes for the game.

Ayton has averaged just 13.5 points and 6.8 rebounds in his last five games since returning after missing two games with an ankle injury.

Those are the numbers.

The Magic switched on Ayton with smaller defenders and Ayton didn’t seal to punish the situation. He had one power dunk early, but never looked to finish that aggressively the rest of the night.

Yes, he got called for traveling looking to score from the block on Bol Bol, but instead of trying to spin around him, just two power dribbles and a facial gets the job done on the thinner Bol.

Now Williams said after the game the team didn’t exploit the red switches as the Suns normally do, but added Ayton doesn’t get the benefit of the contact when on defense and gets beat up on the offensive end.

That’s sticking up for your big, but if Jock Landale and Bismack Biyombo can turn on the smaller guy, seal and finish, then Ayton should twofold.

Ayton has a total of 19 free throw attempts in 10 games. That’s inexcusable for someone of his talent.

This is where Paul is really missed.

The Suns could go to pick and roll and he’d find Ayton for some easy ones, but they need to be able to go to him on the block, midrange or on soft roll and he scores.

They need him to improve his awareness on the defensive end, consistently contest shots and go extend for rebounds outside of where he’s standings.

The Magic beat Phoenix without their most talented player in Banchero, but they still have the size and length that Booker had saying they’re one of the biggest teams in the league.

Their two main problems are inexperience and youth, but you turn that coin over and you’ll find talent and confidence.

They’ll take bad shots, but they at least take them. That led to shooting 15-of-33 from 3.

They take way too many jump shots with so much height, but Franz Wagner will attack the rim.

At 6-10 with his handle, Wagner and Banchero could really be special together.

If Wagner finds the range from 3 as he’s shooting just 24.5% from deep this season, this dude will be scary.

Jamahl Mosley has got some nice young pieces. Now Orlando isn’t going to be able to keep them all. At some point, Orlando has to stop just collecting talent and start building a team to match a style of play and identity.

For now, what the Magic have been good enough to beat the defending NBA champions — Golden State — the NBA’s best team last regular season — Phoenix — and the team that eliminated the Suns in the playoffs — Dallas.

Torrey Craig was calling for it from the bench.

The Suns clearly didn’t get enough against a team has some talented players, but Banchero is Orlando’s go-to.

So the Suns can’t just watch him lock and load.

Williams pointed out how they helped off RJ Hampton on a corner 3, the easiest 3 to make, that gave Orlando a 44-39 lead with 4:21 left in the half to cap a 5-0 burst to break a tie score.

Williams called a timeout right after that 3.

The Magic extended the run to 9-0 as Jalen Suggs and Hampton scored on back-to-back trips. The game wasn’t over, but to give up buckets coming out of a timeout after a defensive lapse showed where Phoenix was defensively Friday night.

This has been a crazy road trip so far for Phoenix.

The Suns traveled east to Philadelphia just in time for Joel Embiid’s return, lost the game and lost Paul to an injury.

They go to Minnesota and drop 129 on the T-Wolves, but have to change their travel plans and fly Thursday to Tampa instead of Orlando amid Hurricane Nicole and take a chartered bus from there to Orlando.

They then discover Landry Shamet having concussion symptoms the day after scoring 16 against Minnesota.

Damion Lee said after Friday’s shootaround he just learned Shamet was out.

So the Suns then lose to one of the NBA’s worst teams in Orlando and have two days to sit on that before concluding their road trip Monday at Miami.

The Heat (5-7) are playing below expectations and have some off-court drama.

The NBA franchise and Miami-Dade County have terminated their relationship with bankrupt cryptocurrency exchange FTX and begin searching for a new naming rights partner for the downtown arena in Miami.

FTX filed for bankruptcy in the United States and its CEO resigned.

What could happen next?

The return of Paul.

While the Suns shouldn’t have needed him to beat Orlando, he was missed.

Can’t see Shamet coming back until after they return to Phoenix. As good as Payne has played, he went another 35 minutes Saturday and was feeling the effects of it.

Committing four turnovers is a clear indicator he was fighting fatigue.

The unexpected has become expected on this trip.

Shouldn’t be any different Monday night in MIA.