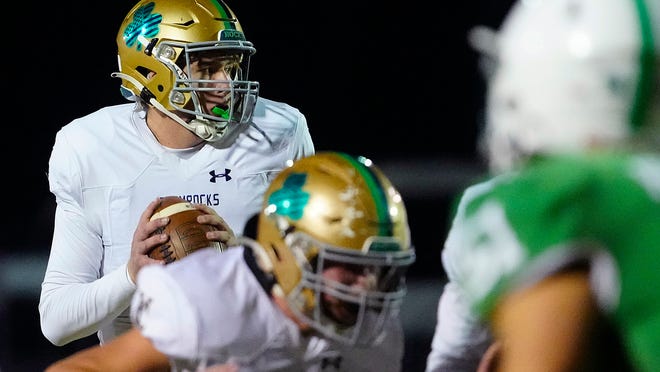 Yuma Catholic has had to put a lot of miles on its bus in its first season in 4A with four trips to the Valley.

After Friday’s 31-28 victory over St. Mary’s at Phoenix College, the Shamrocks feel they’ve lifted their ranking high enough to have home field next week for the start of the football playoffs.

“We think this is going to bump us easily into the top eight,” coach Rhett Stallworth said.

The Shamrocks and the Knights will see how it shakes out Saturday morning when the AIA releases the playoff brackets for the big-school divisions.

Here are five takeaways from a game in which it seemed the last team with the ball would win:

Senior quarterback Richard Stallworth, Rhett’s son and the state’s all-time leader in passing yardage and touchdown passes, completed 21 of 29 passes for 186 yards and three touchdowns. But it was his fourth-down completion to major-college recruit Jaxson Jones that might have been the biggest pass play he made all season.

On fourth-and-5 with 2:43 to play from St. Mary’s 42-yard line, Stallworth threw an out pass to the 6-foot-3, 215-pound Jones for 11 yards. Miss that throw and St. Mary’s runs out the clock with its time-consuming Double Wing T offense.

“He’s a big target,” Richard Stallworth said of Jones. “I actually got hit on the play, I threw it up. I didn’t have to put it right on his chest. He’s a long-armed kid. He’ll go up and get the ball. And that’s what he did. “

Stallworth then hit Jace Seale-Brown for a 17-yard play, found Jarred Marquez for 10 yards, before connecting with Sir Stokes from 3 yards out with 48 seconds left to give the Shamrocks a 31-28 lead. Stallworth was under pressure, moved to his right and waited for Stokes to pop open before hitting him in the end zone.

St. Mary’s pounds the rock and Yuma Catholic plays spread, letting Stallworth dissect the defense with short passes, including an occasional shovel, before taking shots down the field.

Meanwhile, St. Mary’s has no receivers spread out. The 11 are bunched up with David Galindo, out of shotgun, making the reads. He can counter one direction with a back or keep it himself. Galindo was in beast mode all night. Of St. Mary’s first 35 plays, 32 of those were run plays with the Knights stringing together scoring drives of 19 plays and 16 plays to tie the score at 14 in the first half.

Those were St Mary’s only two possessions of the half. Yuma Catholic has one more possession, which led to Logan Rush’s 34-yard field goal as time expired to give Yuma Catholic a 17-14 halftime lead.

Yuma Catholic began running the ball more in the second half.

“We know we can run when we have to,” Coach Stallworth said. “That last drive, we wanted to run intentionally and use some clock, because it was going to come down to the last possession.”

Leaving the Knights less than a minute to move down the field to score worked out for Yuma Catholic, because Galindo, a pitcher on the baseball team, wasn’t able to connect on a couple of deep throws in the end. St. Mary’s was more effective with Galindo running the ball. At times dragging defenders, the bullish Galindo scored all of St. Mary’s touchdowns on runs of 4, 5, 1 and 3 yards. His last one came with 5:20 left for a 28-24 Knights lead. But that was too much time for Yuma Catholic to score.

4. A chance to meet again

St. Mary’s and Yuma Catholic could meet again in the playoffs, because 4A might be more wide open than any of the big-school conferences. Oro Valley Canyon del Oro was The Republic’s top-ranked team but it lost Thursday night to Tucson Mica Mountain.

None of the top eight teams in 4A have made a statement that they’re the team to beat. So why not these guys getting together in either the semifinals of final?

Jaxson Jones’ best position is on defense, playing a rush end or outside linebacker. He is committed to Washington. But it hasn’t stopped Power 5 schools from offering the talented junior, who, this season, has picked up offers from Notre Dame, Boston College, Arizona, Utah, Oregon, USC and Arizona State since mid-October. He is up to 14 college offers, and most of them happened after he committed to Washington in September.

“I always worked hard my whole life with my dad,” Jones said. “It’s starting to pay off now. I have to keep going. I’m open about everything but Washington is where I’m at right now.”

To suggest human-interest story ideas and other news, reach Obert at [email protected] or 602-316-8827. Follow him on Twitter @azc_obert.

How to watch the Phoenix Nitro Rallycross live on DAZN today

The most giving of Master Gardeners