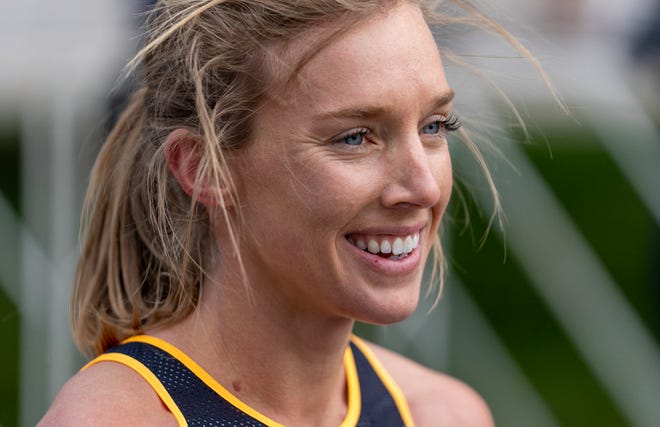 INDIANAPOLIS – National championship footraces are inevitably difficult. Yet the more oppressive it is, the better Emily Sisson is.

In last June’s US Olympic Trials in track and field at Eugene, Ore., temperatures for the 10,000 meters were so hot (up to 87 degrees) that the race was moved to morning. All Sisson did was run away from the field and set a trials record of 31:03.82.

Days after recovering from COVID-19, she set another record — a half-marathon American record in another USA championship race Saturday.

Sisson finished in 1 hour, 7 minutes, 11 seconds in the OneAmerica 500 Festival Mini-Marathon. It was the first in-person Mini since 2019 after the annual race was twice canceled during the pandemic.

Sisson was paced throughout by male runner Brian Harvey, who finished in 1:07:12.

“The last mile, I just needed that,” she said. “He was encouraging. I was hurting so bad. He said, ‘Every second counts. Come on!’ “

Sisson targeted the 1:07:15 record and was choosing between the Mini and a half-marathon in Portugal.

“When we chose this race, we said we don’t need perfect conditions,” she said. “We just need decent conditions. It was definitely windy, and we felt that.”

She chose the Mini seven weeks ago when she felt fit. But she endured a case of COVID-19 about five weeks ago and said she essentially did not train for a month.

“I was a little unsure if this was too ambitious or not,” Sisson said. “But I’m glad we went for it.”

As she put it: What’s the worst that could happen? Go for the record and come up short, as she had already done twice.

The Flagstaff, Ariz., resident said after she came down to sea level from high altitude, symptoms of her lingering illness diminished.

Sisson, an NCAA and Big East champion while representing Providence, finished 10th in the 10,000 at the Tokyo Olympics. In 2007, she won a USA junior title in the 5,000 at IUPUI’s Carroll Stadium, just a few blocks from where the Mini finished at Military Park.

Pomaranski, 39, a mother of three now living in Michigan, broke a 10-year-old personal best. She was 10th in the Houston Marathon in 2:33:35, third-fastest ever by a native Hoosier. While at Miami of Ohio, she set an American junior record in the steeplechase.

The USA half-marathon was run separately from the main Mini, which was won by Mary Munau in 1:11:03. Indianapolis resident Lucy Dobbs, a native of Edinburgh, Scotland, was fifth in 1:17:19.