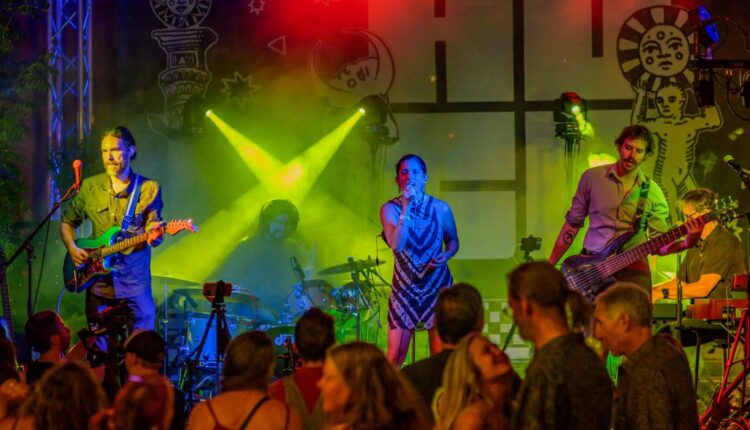 6 ways to ring in the new year in Tucson

If you forget to get a gift for that stray uncle visiting on Christmas, no worries: Swing by the local big box on Christmas Eve. Disaster averted.

But New Year’s Eve is a whole different animal.

Many events require advance planning, getting tickets before they sell out, arranging sitters not to mention the whole dressing up/dressing down chaos.

So here’s a little bit of an early primer of how many people in Tucson will say goodbye to 2022 and hello 2023 on Saturday, Dec. 31

This year’s celebration should be a far cry from last year, which followed a last-minute COVID-prompted game cancellation and rain and cold on New Year’s Eve that put a damper on attendance, said Arizona Bowl Communications Vice President Eric J. Rhodes.

Roger Clyne and the Peacemakers will put on a show at the Arizona Bowl’s downtown New Year’s Eve celebration that features a big taco drop.

Courtesy of Roger Clyne and the Peacemakers


Admission to the event, which gets started at 6 pm in the area around North Fifth and East Toole avenues downtown, is free. In addition to Clyne, there will be a Silent Disco — people dancing to music delivered through wireless headsets — presented by First Interstate Bank and food trucks and beer stations set up in the area. At the stroke of midnight, they will let off fireworks and drop the big taco. For details, visit thearizonabowl.com.

The 2022 Barstool Sports Arizona Bowl pitting the Ohio University Bobcats against the University of Wyoming Cowboys kicks off at 2:30 pm Friday, Dec. 30, at Arizona Stadium on the University of Arizona campus. For tickets, visit thearizonabowl.com/game.

Tucson’s XIXA will crank up its cumbia desert rock at Club Congress for Hotel Congress’s Noir Year’s Eve. This could go down as one of the more interesting NYE festivities, complete with tarot card readers, pop-up performances, DJs, twin dance floors and a taco and champagne toast at midnight. The evening kicks off at 8 pm with a complimentary welcome aperitif and live music from XIXA, which knows how to get the party started and keep it going into the wee hours.

Tickets — available at hotelcongress.com — are $60, $120 for VIP which includes priority entry and access to the VIP lounge in the Century Room jazz club with passed hors d’oeuvres, dessert bar, a complimentary specialty cocktail and live music from The Original Wildcat Jazz Band. VIP’ers also get a special séance experience on the third floor of the hotel, 311 E. Congress St. (Maybe they’ll get a visit from the ghosts that haunt the hotel!)

Turn back the clock

The Original Wildcat Jazz Band will help The Century Room at Hotel Congress, 311 E. Congress St., turn the clock back to the roaring 1920s, when Hotel Congress and jazz were both in their infancy.

“Our style is so much the ’20s so whatever we play will sound like that,” joked longtime band leader and banjo player Rob Wright, who played with the New Christy Minstrels in the late 1970s.

The Original Wildcat Jazz Band is in its 18th year after being founded in 2004 by a pair of jazz-inclined University of Arizona saxophone professors backed by their colleagues and UA students. Wright jumped in early on and quickly became a point man for booking shows and recruiting players.

The New Year’s Eve show will be the Original Wildcat Jazz Band’s first time playing the Century Room, which opened in early February. Wright said the set list will include a little Louis Armstrong, Jelly Roll Morton, Fats Waller and other jazz greats from the 1920s and ’30s.

“We just enjoy when we get a chance to play together because it’s a really good band,” Wright said. “New Year’s Eve should be fun.”

Tickets are $50, $60 for VIP through hotelcongress.com.


Rock in the new year

The Bennu, founded in 2011, has been comprised of the past six years of classically and university-trained musicians with some pretty interesting day jobs: two are doctors, one runs regional farmers markets and another plays and teaches music full-time, said guitar playerNick Szumowski.

“We keep very busy in our work lives,” said Szumowski, a founding member of the band who said their name predated the Bennu asteroid by a couple of years. The band’s name was actually inspired by the ancient Egyptian deity Bennu that may have been the original inspiration for the phoenix legend.

The New Year’s Eve show is one of only five or six that The Bennu does each year, including playing the Gem and Jam Fest in February and a couple of shows a year at the Hotel Congress Plaza.

But the New Year’s Eve gig is a favorite, Szumowski said.

“It’s definitely the show of the year for us. We try to maintain a high energy dance party,” he said, giving props to the Tucson bluegrass-Americana trio Whiskey Treats, which opens the show.

Both groups play original music with a few select covers mixed in, which in The Bennu’s set could include songs by Led Zeppelin, Rage Against the Machine and Stevie Wonder.

Dance the night away

Casino del Sol, 5655 W. Valencia Road, gets the award for New Year’s Eve over-achiever. It’s hosting not one but two events on Saturday, Dec. 31 — a Tejano New Year’s Eve Party in the Bingo Hall and a dance party in the Event Center. Both are open to audiences 21-and-older.

Gigi and the Glow headlines the dance party beginning at 10pm in the Event Center, which can hold about 2,000 people. Fronted by longtime singer and entertainer Gigi Chanteuse (aka Gigi Robinson) formerly of 80s and Gentlemen, the band has become one of Tucson’s top dance music cover bands since forming in 2016. They perform rock and pop dance music spanning the 1970s to today, as well as dipping into a deep catalog of Latin dance music from cumbias to boleros.

Grammy-winning Tejano artist Chente Barrera, from San Antonio, Texas, leads the lineup for the Tejano New Year’s Eve Party in the Bingo Hall beginning at 7 pm The hall can hold up to 600 people.

Both events run until 1 am and admission is free.

After Tuition, Books, and Room and Board, Colleges’ Rising Health Fees Hit a Nerve