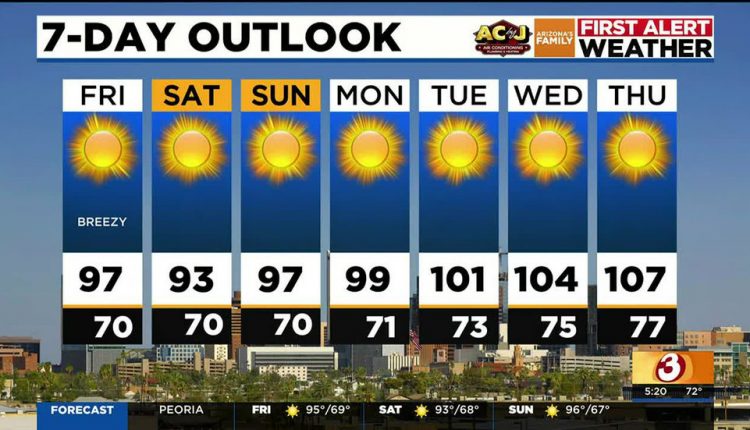 PHOENIX (3TV/CBS 5) – An extended area of ​​low pressure has buckled the jet stream into Arizona from Canada. As a result, we’re going to get some below-average temperatures into the state, especially in the northern portions of Arizona. In the Valley, afternoon highs for the weekend will be running a couple of degrees below average, and many areas will see overnight lows in the 60s. The pattern will be evident until Tuesday of next week, when a large area of ​​high pressure will push its way in from the west.

We’ll probably stay in this temperature see-saw until the monsoon flow begins to set up. Some monsoon experts are predicting an early onset of rain. Others are looking for more of a traditional start around the first week of July; July 4th fireworks are always a good guess. Most of the state has equal chances for an “average” amount of rain in the monsoon, while Phoenix, and areas of SE Arizona, including Tucson, have a slightly higher chance for “above” average rain. In only 3 of the past ten years, the monsoon has produced less than average precipitation.

Today, peak wind gusts around the state included 52 mph at Winslow and Taylor. Flagstaff had a 48 mph wind gust while Window Rock and Show Low topped out at 47 mph. Winds will die down rather quickly overnight, with the Red Flag Warnings set to expire at 8 pm

Watch: Going Beyond the Script of ‘The G Word’ and How Government Responds to Disease (Or Not)