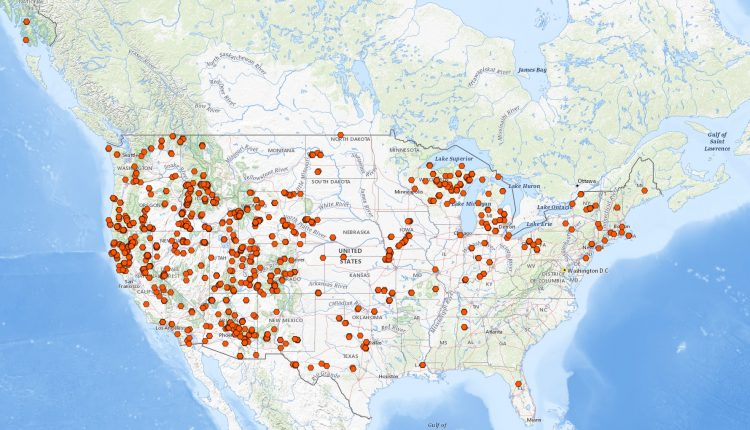 A derogatory word has been removed from the names of places on federal lands, including 66 sites in AZ

Nearly all federal geographic features using the derogatory word sq*** have formally been renamed, after the U.S. Department of the Interior on Thursday released new names for 643 locations across the United States, including 66 in Arizona.

The name change is the final step in the historic effort launched nearly a year ago by Interior Secretary Deb Haaland after she declared “sq***” a derogatory term because of its historical use as an offensive ethnic, racial and sexist slur for Indigenous women.

“I feel a deep obligation to use my platform to ensure that our public lands and waters are accessible and welcoming,” Haaland said. “That starts with removing racist and derogatory names that have graced federal locations for far too long.”

In Arizona, 66 of the 67 geographic locations were renamed. The one site retained its name because it is listed as a historical site by the Board on Geographic Names.

The Board on Geographic Names has two definitions for a historical feature, according to U.S. Geological Survey Public Affairs Specialist Alex Demas.

“In most cases, it refers to a feature that no longer exists or no longer serves its original function,” Demas said in an email response to the Arizona Mirror. Examples include a manmade feature like a dam or a natural feature like a lake.

“The second use of historical refers to places that still exist but the name has fallen out of local use,” he said. “If we are informed by the community that no one in the area knows or uses the name, we will consider making it historical.”

As for the one site in Arizona, Demas said that it appears that the physical geographic feature no longer exists and there was no evidence that the name is used locally. That led it to be considered historical, and not needing to be renamed.

For instance, two streams in Yavapai county are now named Ché Yagoodigúhn Creek and Iiyá Draw. The Yavapai Apache Nation and Yavapai-Prescott Indian Tribe are located within Yavapai County, and the new names are derived from their traditional languages.

“Changing the names is important to our Native community,” Jermaine wrote in a text message to the Mirror. “It is important to all women to ensure geographic sites do not include defamatory terms meant to degrade and harm women in their names.”

Jermaine praised the work that Haaland has been able to do in renaming the geographic sites on federal land, and she believes that states should be working to do the same thing.

The name changes come after a lengthy process carried out by the Board on Geographic Names and the Derogatory Geographic Names Task Force, which was established via secretarial order and included tribal and federal representatives.

“I am grateful to the members of the Derogatory Geographic Names Task Force and the Board on Geographic Names for their efforts to prioritize this important work,” Haaland said. “Together, we are showing why representation matters and charting a path for an inclusive America.”

The Derogatory Geographic Names Task Force received more than 1,000 recommendations for name changes during the public comment period, according to the Department of Interior. The task force worked with nearly 70 tribal governments in nation-to-nation consultations, which resulted in several hundred more recommendations.

After the public comment and tribal consultation periods closed on April 25, the task force reviewed all the information and developed a list of final recommendations, and submitted it to the Board on Geographic Names on July 22.

The board then approved the names during a meeting on Sept. 8. Once the names were decided upon by the board, they are immediately official for federal use, according to the U.S. Geological Survey.

New helicopters are coming to the Phoenix Police Department