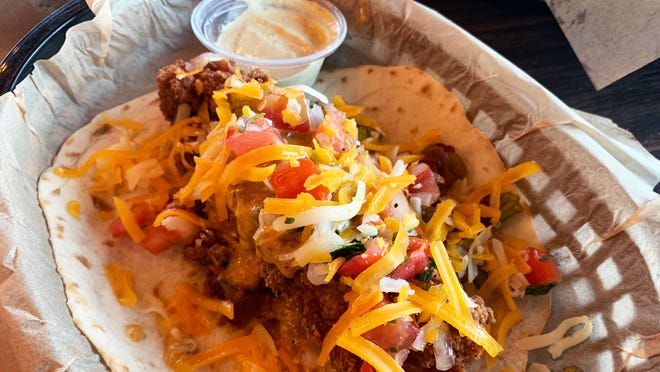 Torchy’s Tacos is a Texas legend that recently arrived in Phoenix. And after reading helped a dozen articles about the Austin-based chain’s secret menu, I was surprised to find one just sitting there next to the cash register at the new outpost on Camelback Road.

The white laminated page practically begged to be canceled, with menu items like a trailer park hillbilly style taco and something called green chile pork missionary, with a corn tortilla on top of a flour tortilla. I couldn’t believe I was reading this, and it turns out, I shouldn’t have been able to.

“Can I have that back?” said the employee wearing a cartoon devil shirt. “That’s not actually for customers, it just got left out by accident.”

I handed it to him and he quietly slipped it under the counter.

“So how does that all work?” I said. “Are there special toppings you can ask for?”

He told me that at Torchy’s, which is known for its outlandish Tex-Mex tacos, you can order anything on the menu “trashy” or “hillbilly style.” Trashy means substituting the iceberg lettuce for Texas queso. Hillbilly style will get you green chile queso, bacon, chorizo ​​and pico de gallo. (I was expecting something more like pig jowls or possum, but OK.)

Ordering at Torchy’s is kind of intense. The sheer number of ingredients and customizations can be dizzying, but luckily I had a Texas native along to help.

Get these cluckets: You need Thai chicken nuggets in your life. Find them here

The house that breakfast tacos built

When I first mentioned the restaurant, my colleague’s eyes lit up and she got more animated than an Arizona climate reporter talking about the water crisis.

She explained that when she was growing up in Texas, Torchy’s was the go-to option in high school, Imbued with nostalgia and happy memories of soupy queso topped with large dollops of guacamole.

The chain is most well-known for one Texas culinary treasure: the breakfast taco. The pride of San Antonio and Austin, breakfast tacos are now being sold at more than 90 restaurants nationwide. But the origin story of scrambled eggs and meat-topped tortillas has inspired fierce debate between the two cities.

One thing is for sure, they have yet to become a thing here in the Valley, where Filiberto’s and breakfast burritos reign supreme.

The only time I’d had a proper breakfast taco, besides when I made them at home, was at the Torchy’s in Denver where one afternoon I washed down an eggy taco with a Great Divide hazy IPA.

I remember thinking, fridge-y but kinda fantastic. Although, it could have been the Rocky Mountain buzz speaking.

Opening a Torchy’s in Phoenix is kind of like bringing Pizza Hut to Chicago or a Taco Bell to Mexico City. It begs the question, why?

“It’s the worst that Austin could possibly give the world, and it’s given the world lots of bad things,” Texas food writer and taco editor José R. Ralat told me over the phone recently.

But, if I did go, he recommended seeking out the secret menu. Specifically, the Dirty Sanchez, which means at Torchy’s eggs and a fried poblano chile with cheddar cheese.

Giving the regular menu a quick scan, my Texas dining partner was relieved to see many of her favorite menu items had made the cut and were available at the first of three planned Arizona locations.

The Republican taco with jalapeño cheddar sausage was still there, as was the Democrat taco made with barbacoa and cotija cheese on a corn tortilla.

The Independent taco, a vegetarian offering, was missing in action. Ditto to the fancy cane sugar soft drinks that used to be a staple of the soda machine, but here in Phoenix have been replaced with Coke products.

We ordered the greatest hits of her childhood as well as a few oddballs.

The much-hyped queso arrived and we were both disappointed in its miniscule dollop of guacamole, which had been almost completely subsumed by the molten cheese. It stuck out like a tiny avocado island, overshadowed by the cilantro next to it. I enjoyed it in the same way one enjoys melted Velveeta cheese at a Super Bowl party. The thin tortilla chips were just right for the volcano blast of smoky cheese.

The tacos were a blur, and even while tasting them side by side, it was often hard to differentiate between them.

We ordered five and despite having different variations of trashy and hillbilly, all seemed to be covered in the same cheap yellow and white shredded cheeses. (I don’t remember seeing any melted queso.)

The flour tortillas, widely derided as cheap, shipped in from an unknown mass market vendor, were better than I remembered. I would not call them good or even passable, but they were pleasantly puffy.

As a whole, I’d stick to the breakfast tacos, which are served all day.

The trailer park hillbilly style from the secret menu was a disappointingly dry take on a fried chicken taco. But when the main ingredient was egg, I found the patty to be wonderfully soft and pliable.

My favorite was the potato, egg and cheese, which kept it simple but generally tasted like a better version of something I’d expect to find at Jack in the Box.

A word of caution: Steer clear of the Lil’ Nookies, which my Texas friend swore by and I ordered out of curiosity.

The employee at the counter recommended getting a baker’s dozen and that was a big mistake, as one bite of the molten ball of fried cookie was enough. Topped with powdered sugar and what seemed like an entire jar of red cherries, they’re a 5-year-old’s fantasy come true. I couldn’t finish them.

Despite over-ordering, I left Torchy’s feeling slightly better than I typically would after consuming a single breakfast burrito from a place like Filly B’s.

Breakfast tacos may be less satisfying than burritos, but they’re also inherently less filling. So you can eat them more often. Perhaps that’s the charm.

And even though there may be better breakfast tacos in the world, Torchy’s is getting the ball rolling in the Valley. And that’s particularly good news for nostalgic Texans and not exactly bad news for the rest of us either.

Andi’s latest review: This Chandler restaurant made me love Filipino food even more