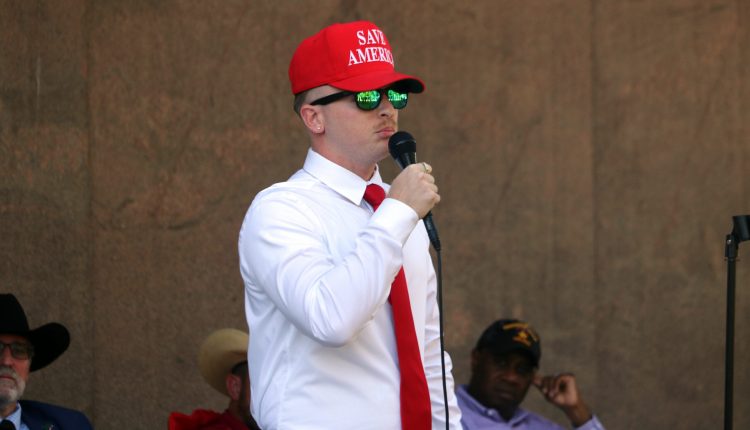 Several Republican candidates have done interviews with an Arizona man who entered the Capitol on Jan. 6 and is an active member of a Telegram channel filled with neo-Nazi and antisemitic rhetoric.

Micajah Jackson, known online by the handle “The JFK Report,” was one of the first people sentenced earlier this year for entering the Capitol alongside members of the far-right extremist group the Proud Boys.

Jackson is known for his anti-government rhetoric, including calling for the arrest of FBI agents, who he said should be charged with treason and their families “humiliated.” He also claimed that the FBI agent involved in his case will face “life in prison.”

But Jackson is also involved with a larger group of far-right extremists that include local antisemites and anti-LGBTQ provocatuers whose group chat is rife with antisemitic memes and praise for Nazi Germany.

The Telegram channel, which has nearly 500 members, is administered in part by Greyson Arnold, a white nationalist pro-Nazi blogger who was recently found by The Daily Beast to have been being paid by the Washington state Republican Party. The group chat, where users share their uncensored thoughts and vile memes, is an offshoot of Arnold’s “Pure Politics” Telegram channel.

The posts include COVID-19 denialism, anti-LGBTQ sentiments, and racism, but antisemitism is center stage. Many of the posts reviewed by the Arizona Mirror centered around antisemitic tropes meant to degrade the Jewish people and even wishing for the return of Nazi Germany.

“Still think we ‘overreacted’?” one meme says superimposed over a photo of Nazi propaganda minister Joseph Goebbels. The group chat includes many offensive memes using the antisemitic “happy merchant” image. Others include images of swastikas or sonnenrads, a symbol present in the 2019 Christchurch, New Zealand, shooter’s manifesto and on his equipment.

One Republican who has sat for an interview with Jackson is Christian Lamar, a Republican candidate for the Arizona House of Representatives in District 2. Lamar, who is Black, said he has no qualms with Jackson’s social media activity or participation in online spaces where racism and white supremacy are rampant.

“His membership of a telegram group is totally irrelevant to his YouTube channel,” Lamar said in an email to the Mirror. “That’s like saying ‘Ooo AZ Mirror, you’re a member of a Trump channel, do you agree with all of Trump’s views?’”

Jackson has engaged with the group, posting his content to the channel and in some cases engaging with members and asking questions.

“How should FBI agents be prosecuted?” Jackson asked the chat in a poll. The options he provided: life in prison, exiling them to South America or revoking their citizenship.

“20 years hard labor to repair the infrastructure of the cities that have gone to ruin while they were busy attacking Whites on behalf of their leftist and jewish masters?” said one user who uses a fasces, a symbol of ancient Rome co-opted by the alt-right, as his profile image.

Jackson responded to the idea with a thinking emoji.

Lamar insisted that he stands with Israel and the Jewish community. But said he still plans to do a “2nd and 3rd interview” with Jackson.

“In the strongest terms, I totally and completely condemn all antisemitism, hate, prejudice, bigotry, racism & discrimination of any kind,” Lamar said.

He also railed against the FBI when asked about some of Jackson’s comments about federal law enforcement.

“In the least the FBI/DOJ/ATF deserves corrective action & thousands of its employees to be fired,” Lamar said after listing what he said were scandals, such as the raid on Mar-A-Lago to recover roughly 100 classified documents that former President Donald Trump allegedly kept in violation of federal law. “I certainly would not ever object to shrinking the size of government or deregulation.”

Lamar also stood by comments he made to Jackson in a May interview, including that he plans to move to decertify the 2020 election if elected to represent his north Phoenix district, despite there being no legal way to do so. Lamar also said in the interview that he believes election workers should wear body cameras.

A platform for conspiracy theories

But Lamar is not the only Republican candidate that Jackson has interviewed.

“If you’re telling me that a few people that break into or at least commit a malicious destruction of property to the Capitol is a threat to the nation, then we are in serious trouble,” Republican secretary of state nominee Mark Finchem said about the violent Jan. 6 insurrection in a late September interview with Jackson.

Finchem was present that day, ostensibly to deliver an “evidence book” to former Vice President Mike Pence to convince him not to accept the presidential electors from swing states that Joe Biden won. Finchem has been untruthful about his whereabouts that day, and recently divulged that he spoke to the congressional panel investigating Jan. 6, claiming he spoke as a “witness” to the day’s events.

“What I saw was a malicious destruction of property,” Finchem told Jackson. “Can we link that to an intrusion into the Capitol? Perhaps a few individuals.”

At least 440 people have been arrested so far on charges related to breaching the Capitol, including 125 charged with assaulting or impeding a law enforcement officer.

Jackson was sentenced in March to 36 months of probation after pleading guilty to a misdemeanor of parading, demonstrating or picketing. Federal prosecutors asked the court to sentence him to prison for six months, and complained that Jackson was using his arrest as a “springboard” for self-promotion and spreading dangerous conspiracy theories.

During the course of the interview, Finchem spun a conspiracy theory about the Capitol riot without any pushback from Jackson.

“The nagging question for me, why were the magnetically locked doors in both the House and the Senate unlocked and security staff on the inside waving people in?” he said.

Finchem’s “nagging question” is similar to a false viral claim that originated with a disbarred lawyer for the Oath Keepers.

“Now, as a law enforcement officer I’d look at that and say, ‘Well that doesn’t even pass the sniff test on illegal entry,’” he added. (Finchem was a police officer in Michigan until 1999; personnel records include a note saying, “poor rating, would not rehire.”)

Finchem also said that the deaths of five Capitol Police officers had been “debunked” and called it “fantasy and fabrication.” One officer died of a stroke the day after the riot and four other officers died by suicide in the days and months after the riot. All of the officers had sustained injuries during the riot.

Finchem did not respond to multiple requests for comment.

“Kelly took a few questions from this guy at an event as a courtesy to a fellow Marine,” Cooper spokeswoman Erica Knight said to the MIrror. “Kelly’s philosophy is to get his message out to the Arizona people and be as transparent to all voters as possible. If he responds to questions, it certainly does not mean he has any ties or similarities to a person’s background.”

Interviews are not the extent of Jackson’s political work.

When Trump was in Mesa earlier this month for a rally in support of Arizona Republican candidates, Jackson was spotted by Arizona Right Wing Watch working behind a table for state Sen. Wendy Rogers, R-Flagstaff.

Rogers did not respond to multiple requests asking if Jackson was a paid campaign worker or a volunteer.

In an email to the Mirror, Jackson said he was not working for Rogers or any political campaign. He said that he was with his “Jewish manager” who knew the volunteers running Rogers’ booth, and they allowed him to “hang out under the tent because of the heat that day.”

Jackson also said that both his “managers” are “devout Jews.” He defended his involvement in the racist Telegram channel, saying that he follows “multiple different political factions” to share his content and “philosophy.” He also pushed back on claims of antisemitism and said that he does not condone, share or support the beliefs of those in the Telegram channel.

“I study, observe, and analyze multiple spectrums of political factions, theories, and ideology for the work I do,” Jackson said in an email to the Mirror. “I despise any form of authoritarianism. Especially demonic evil forms of governments like Marxist ideologies, i.e., Socialism, Fascism, & Communism. I do not align with political factions or ideologies. I follow Jesus Christ. I stand for American moral liberty. The essence of the United States of America is life, liberty, and pursuit of happiness.”

Jackson did not respond to additional questions about his use of antisemitic tropes on social media, instead accusing the Mirror of pedophilia and repeating a long-held mistruth that German Nazis were “socialists.” Although known formally as the National Socialist Party, the Nazi ideology was based on white supremacy, fascism and popularism, not the socialist ideals that sprung out of Marxism in many parts of the world.

Jackson also is affiliated with a number of known antisemites and neo-Nazis, such as a former member of the Rise Above Movement who also administers the Telegram group chat. RAM is a white supremacist gang founded in Southern California that engaged in violence, including the 2017 Unite the Right rally in Charolettsville, Va.

Rogers has affiliated with people within Jackson and Arnold’s circle, such as local groyper Kyle Clifton, who is also an admin in the group chat in which Jackson is a member. Jackson is a member of the “Nationalist Network,” an organization that includes the former RAM member, Arnold and Clifton.

After the Mirror reached out to Jackson, Arnold’s Telegram channel put up a post dedicated to Jackson saying the “small group trying to silence Kayne are trying to smear and silence” Jackson.

Rapper Kayne West, known now simply as Ye, has been removed from Twitter and Instagram for making antisemitic statements which have made him a rising star among the alt-right community.