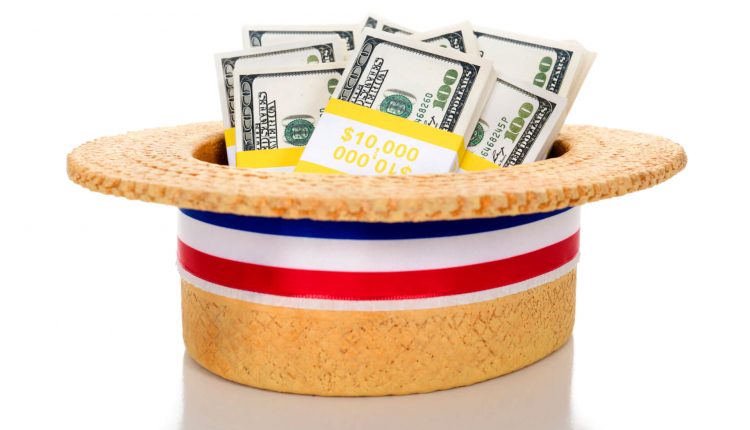 When Matt Gress, the budget director for Gov. Doug Ducey, launched his campaign for the Arizona House of Representatives in December, he promised not to accept any contributions from lobbyists during the legislative session to avoid the appearance that his campaign might influence his work for the state.

His first campaign finance report in 2022 shows he did not follow through on that promise.

Between the start of the annual legislative session on Jan. 10 and March 31, Gress received 24 separate contributions from lobbyists totaling nearly $13,000.

For the quarter, Gress reported raising $183,000  in his bid to win the Republican nomination in District 4.

Back in January, Gress told the Arizona Republic that he would hold himself to the same standard as lawmakers, who are barred by state law from raising money from lobbyists — but not their clients — during the annual legislative session.

“While state law doesn’t require it, I’ve made the decision to adhere to the standards governing lawmakers while they are in session. Therefore, I will not be accepting campaign donations from registered lobbyists while the Legislature is in session.” Gress said.

It was seen as a way to not have any appearance of unethical behavior given said lobbyists are usually hoping to gain something in their favor — typically in the form of legislation benefiting one of their clients.

Lawmakers are currently in the middle of a budget stalemate. As Ducey’s chief budget aide, Gress plays a pivotal role in the process of negotiating a budget deal with legislators.

Gress first said in a written statement that any money received from lobbyists “were given before the start of the legislative session and reported when received by the campaign treasurer.” That, he said, includes several transactions dated on January 26, more than two weeks after session began.

Gress brushed it off by saying Guldner, who is registered as a lobbyist, isn’t really a lobbyist.

“He’s a leader within multiple business organizations, and the CEO of one of the largest employers in the state. No one thinks of Jeff as a lobbyist who is spending his days under the Capitol dome influencing legislation,” he told the Arizona Mirror in a text message. “The fact that he filed paperwork out of an abundance of caution doesn’t change my view.”

Guldner is one of a dozen APS executives who are registered as “authorized lobbyists” of the monopoly utility and its parent company, Pinnacle West, because they communicate with lawmakers to influence legislation on behalf of the company.

No one thinks of APS CEO Jeff Guldner as a lobbyist who is spending his days under the Capitol dome influencing legislation. The fact that he filed paperwork out of an abundance of caution doesn’t change my view.

Gress said his logic also applies to David Adame, the president and CEO of Chicanos Por La Causa, who contributed $520 to Gress’ campaign on March 31. Like Guldner, Adame is registered as an “authorized lobbyist” for the company he leads.

Ducey last month signed bills that would benefit APS — one of which the utility joined with other utilities in hiring 107 lobbyists to get the bill into a law. That new law, which goes into effect 90 days after the legislative session ends, ensures APS and other regulated monopoly utilities will face no electric retail competition in Arizona.

And Gress’ campaign received checks from the Arizona Police Association, which supported multiple bills Ducey signed into law this year, and Southwest Gas which, like APS, lobbied for the retail competition bill to pass.

A decade ago, Gress would have been required to resign from his government job in order to run for office. But that law was changed in 2012  to allow government employees to continue cashing taxpayer checks while seeking public office.

Attorney Tom Ryan called it “shameful” and “disgusting” that Gress continues to work on the Ninth Floor while seeking a seat in the Arizona House.

“Arizona has gutted many of its conflict of interest laws and, supposedly, people will act out of selflessness and will act in the best interest of the state of Arizona. But as we can see, that’s simply not true,” he said, pointing to  a recent study showing Arizona among the worst states for government corruption.

He said Gress’ campaign finance report shows that the Republican was lying about not taking lobbyist money during the session.

“He’s supposed to be supporting and pushing the governor’s agenda on a budget. It’s just vile and disgusting,” Ryan told the Mirror.

While Ryan said receiving the money during the session poses a problem in itself — especially since Gress said he wouldn’t do that — he found it more troubling that Gress has mounted a campaign for the legislature while working in the Governor’s Office.

Lobbyists giving Gress money for his campaign aren’t doing so out of the goodness of their heart, Ryan said.

“What he’s doing is lying to the Arizona public. The question is, will people in his legislative district understand that or not? But he’s clearly lying about not accepting money from lobbyists,” Ryan said.