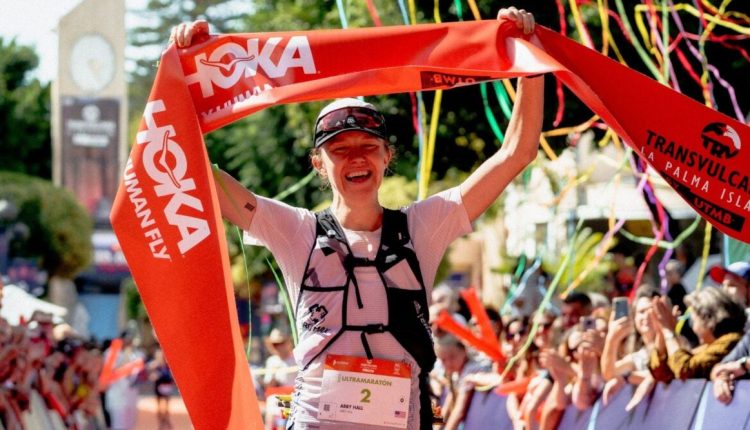 Get access to everything we publish when you >”,”name”:”in-content-cta”,”type”:”link”}}”>sign up for Outside+.

In the home stretch of the 73km Transvulcania by UTMB race on Saturday afternoon on the island of Santa Cruz de La Palma, Abby Hall was greeted with a hero’s welcome. But her day wouldn’t be complete until she gave her own rousing finish line greeting to another runner in the field.

After running a strong final 5km climb from the beach at the seaside village of Tazacorte, Hall, a 32-year-old runner from Flagstaff, Arizona, was met with boisterous cheers and a festival atmosphere as a police escort led her to the finish line in the town center of Los Llanos de Aridane. It was both a celebration of Hall’s commanding victory—Sweden’s Petter Engdahl was the overall winner and received a similar treatment about 80 minutes earlier—as well as part of a raucous return of the iconic event after a three-year absence due to COVID-19 and a devastating volcanic eruption last fall.

The race, which is now part of the UTMB World Series, sends runners from the beach at the Faro de Fuencaliente lighthouse at the south end of the island up what is known as the Ruta de los Volcanoes to a high point on the 7,965-foot summit of Roque de Los Muchachos peak and then back down to the sea and into the small tourist city on the west side of the island.

About 1,300 runners competed in the ultra-distance race, plus another 1,000 in the marathon and half-marathon The field was the biggest in the race’s history and included more local runners than ever before—many of whom were challenging themselves to celebrate the rejuvenated spirit of the island a year after the destructive impact of the volcano.

“It’s not hard to catch the La Palma buzz,” Hall said not long after finishing the race in 10th place overall. “The people here are what make this race such an amazing event. There’s such good energy. I just kept thinking about what they’ve all been through here the past few years, and to be able to come together and have this exciting event with people coming here to run from all over the world was really amazing.”

Following a destructive volcanic eruption on the island, 1,300 runners competed in the Transvulcania ultra-distance race, plus another 1,000 in the marathon and half-marathon. Map Credit: Transvulcania by UTMB)

While Engdahl went out hard from the start, Hall started the race conservatively, knowing she wanted to save energy and strength for the long, continuous technical descent in the second half of the race. But about 4 miles into the race, where a more rigorous climb began up to the La Deseada volcano—the highest summit among the 120 volcanoes of the Cumbre Vieja mountain range—she pulled out her trekking poles and started to surge.

A year ago, not far from that very point, one of the volcanic calderas erupted, sending a 2.5-mile wide river of molten lava on a devastating 5-mile path to the sea down the west side of the mountain. Although no one was killed, the lava flow destroyed more than 3,000 homes and buildings and displaced more than 7,000 people. It also severed the coastal highway enroute to forming a new peninsula, greatly disrupting daily life and causing multi-hour detours to reach places that had been only minutes apart.

Admitting that she was touched by the number of local residents in the race and cheering along the course, Hall took the lead on the steep climb, passing Norway’s Yngvild Kasperson and Ecuador’s Jessica Tipan, and, in doing so, opened up a sizable gap to 6,330-foot summit of the caldera. As her last race of a long season that began with a second-place finish in the Grandcanaria 126km race back in March, she was excited to close out the year with a strong effort. And she was especially stoked to do it with her husband, Cordis Hall, as part of the journey.

They’re both professional runners on the Adidas-Terrex trail running team and, often in recent years, though not always, they’ve been able to focus on the same races. Prior to this race, they both ran the Innsbruck Alpine 65km race on May 6 in Austria, with Cordis placing ninth among men in 11:44 and Abby winning the women’s race shortly thereafter in 12:12.

But while Abby has committed herself full-time to trail running this year, Cordis works a full-time job as a sales engineering manager for a software company. That’s put them on different training schedules with decidedly different daily agendas. He supported Abby in Chamonix in August, when she finished third in the CCC 100km race—her third straight top-10 effort in that event—but he also spent long hours working from 5 pm to 2 am to match US business hours while he was there.

A Kiss and ‘See You At The Finish Line’

This weekend, as Abby was one of the contenders in the women’s race, Cordis was hoping to run consistently and finish among the top 20. But as Abby was surging up the mountains and starting to feel good, Cordis was starting to struggle a bit. She eventually caught him near the 20-mile mark and, after sharing a singular kiss of mutual joy and support, they each went along on their own pace to the finish line. 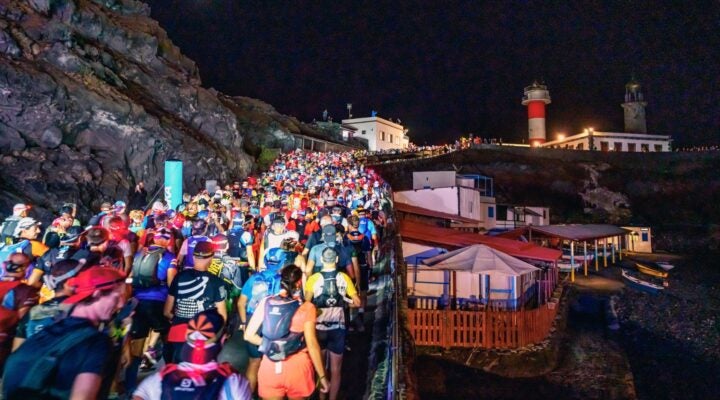 As Abby was celebrating her win after 8 hours and 29 minutes of running and doing an interview with UTMB’s live stream coverage, Cordis was dealing with a lot of cramping on the 13-mile descent from the volcanoes. Although he was in about 25th place and still within reach of this goal, the cramping got much worse on the final 5km climb into the town center and the wheels fell off. Several times he had to stop and lay down to get his body to stop convulsing.

“I’ve had some chronic cramping issues, my whole life. Sometimes I can contain them, sometimes I can’t,” he said. “It had been manageable by my normal standards until I hit the beach. On the descent, I could feel it coming on, but I could sit with it. But then leaving the beach every muscle below my ribs would lock up and I would drop down to the ground and have to lay there for a while. You can’t drop at that point, but I was very worried I was going to get pulled from the race.”

To his credit, Cordis did what it took, battling the pain and awkwardness all the way to the finish line. He finally got there about 90 minutes after Abby, crossing the finish line at 9:58 in 59th place overall, 54th among men. She was there to hug him at the finish, each celebrating the chase to share their journeys, even if decidedly different outcomes.

As much as he was hurting, Cordis said he was inspired to know that Abby was on her way to the win. She had increased her margin of victory over Kasperson, who finished second in 8:47, followed by Ecuador’s Jessica Tipan in third in 9:28.

“I didn’t need to ask … I knew she was going to win,” Cordis said. “After she passed me going up the mountain, Yngvild passed me about 15 minutes later, so I knew, ‘Yeah, she’s got this.’ ”

A year ago, the Halls made the bold decision to relocate from Boulder, Colorado, to Flagstaff. The drier, more arid climate, not to mention easy access to the Grand Canyon, has helped Abby begin to take her running to a new level. But with different daily schedules and different CTS coaches—Abby works with Jason Koop, while Cordis is coached by Corrine Malcolm—it means they don’t run together as much as they used to.

But they’ve found a way to make it all work since they got married in 2019 and have enjoyed an amazing journey together so far.

“We don’t run together as often, but that’s OK because I think because so much of our life does revolve around running, racing, training and traveling to races, that when we’re home, I feel like we just focus on being home together,” Abby says. “Maybe the date night isn’t a run, but instead going separately on our runs and then just going on a date.”

Next year in Chamonix, Abby will be making the jump from the CCC to the full UTMB ultra distance. For now, Cordis hopes to get more insight into what makes him suffer from cramping so often.

But for the time being, they’ll both set the training metrics and intensity aside and focus on weekend hikes that will no doubt include an overnight bivvy here and there.

They’ll also be volunteering at the Javelina Jundred on October 29-30 in Fountain Hills, Arizona, as a way of having some fun together and giving back to the sport they love.

“We make it work by always having check-ins to see where the other one is at,” Abby says. “There are definitely days where I’m like, ‘OK, I’m going to Canyon, I hope you have a good work day,’ and I know it’s hard for him to be ‘OK, I’ll hold down the fort for us here,’ But the way we approach it is ‘when we win, we win together, when we lose, we lose together.’ This was a little bit of a mixed bag for us, but overall it was really exciting. Viewing all of this as our own little team has made it really special.”

RELATED: How to Train for an UltraMarathon – in a City