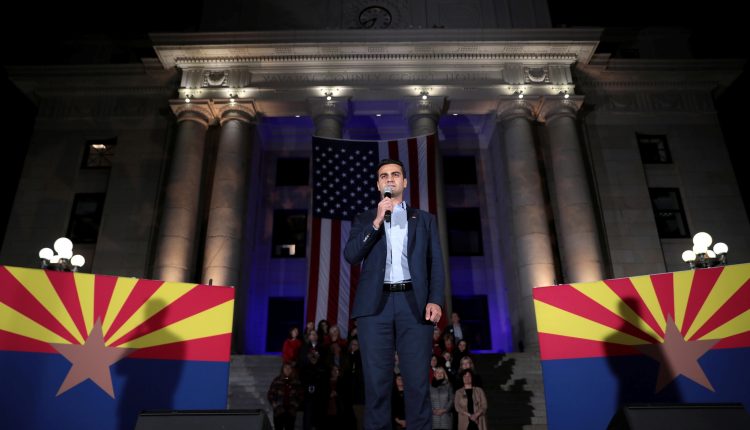 Republican Abe Hamadeh, who trails by dozens of votes in the race for attorney general, is the only candidate endorsed by former President Donald Trump in a statewide contest that still had a chance to come out ahead.

Fellow Trump-endorsed Republicans Kari Lake and Mark Finchem have refused to concede in races for governor and secretary of state that their Democratic opponents have clearly won.

Hamadeh cut into Democratic opponent Kris Mayes’ lead this week as results were incrementally released, and on Thursday he inched closer to her, at one point to within 55 votes.

When ballot counting ended Thursday afternoon, Mayes maintained a razor-thin lead of 143 out of 2,500,931 votes. There are an estimated 11,070 votes left to count statewide, almost all of which are in Maricopa and Pima counties.

The race will go to an automatic recount under Arizona’s new law that calls for a recount when the margin between the two candidates is 0.5% or less.

A report from FairVote, an elections reform organization, found that recounts rarely change the outcome of races, and the margins must be incredibly close for that to happen — like in this race.

“In the 6,297 statewide general elections from 2000 through September 2022, there were 35 completed statewide recounts,” Will Mantell, press secretary for FairVote said in an email. “Only three of those 35 recounts overturned the outcome of the race. In all three, the original margin of victory was less than 0.06%.”

Mayes and Hamadeh are separated by 0.006 percentage points.

After Democrat Katie Hobbs defeated Lake in the governor’s race and Adrian Fontes beat Finchem in the contest for secretary of state, both Republican candidates promised to keep fighting.

In the days since the Nov. 8 election, Lake, Finchem, Hamadeh and their supporters have been asking voters who experienced issues at Maricopa County polling places to share their stories as evidence of voter disenfranchisement.

About 30% of polling places in Maricopa County had ballot printer issues on Election Day that caused tabulators to fail to read those ballots. Voters were given the choice to put their ballot in a box to be tabulated later at the county’s central tabulation center, to cancel their ballot and try with a new ballot or to head to a different polling place.

Many voters have shared stories via videos posted on social media about their frustrating and time-consuming experiences voting on Election Day, but none so far have claimed that the issues kept them from voting. In some of the videos, the voters acknowledged that their votes were tabulated at the polling place.

“I am still in this fight with you,” Lake said in a video posted Thursday morning.

In response to Lake’s claims, the Hobbs campaign likened Lake to Trump and his refusal to acknowledge defeat in the 2020 presidential election.

“Let’s be clear: Refusing to accept the result of an election because you don’t like the outcome is unacceptable — and it’s this type of dangerous rhetoric that led to the deadly January 6 insurrection,” the Hobbs campaign said in an email to supporters on Thursday.

Lake’s campaign told its followers on Thursday that those in charge of certifying the election had an important decision to make.

“Will they certify an election with record voter suppression & let @katiehobbs systematically destroy this state?” the campaign tweeted. “Or will they let the people of Arizona have a free & fair vote?”

Some Republicans in Arizona have called for the results of the midterm in Maricopa County to be thrown out and for a new election to be held, something that is not allowed by state law.

Lake hasn’t called for a new election, but she did hint at a possible upcoming lawsuit.

“We’ve been busy here, collecting evidence and data,” Lake said in the video. “Rest assured, I have assembled the best and brightest legal team. And we are exploring every avenue to explore the many wrongs that have been done this past week. I’m doing everything in my power to right these wrongs. My resolve to fight for you is higher than ever.”

The Lake campaign published a video Wednesday evening featuring clips of Lake campaigning, doing interviews and shooting target practice, to the soundtrack of “I Won’t Back Down” by Tom Petty.

The Hobbs campaign did not respond directly to the Arizona Mirror’s request for a comment on Lake’s refusal to concede.

“Governor-elect Katie Hobbs is laser-focused on her transition, building a team that is ready to hit the ground running on Day One,” Hobbs campaign manager Nicole DeMont said in an email. “Arizonans made their voices heard on November 8th, and we respect the will of the voters.”