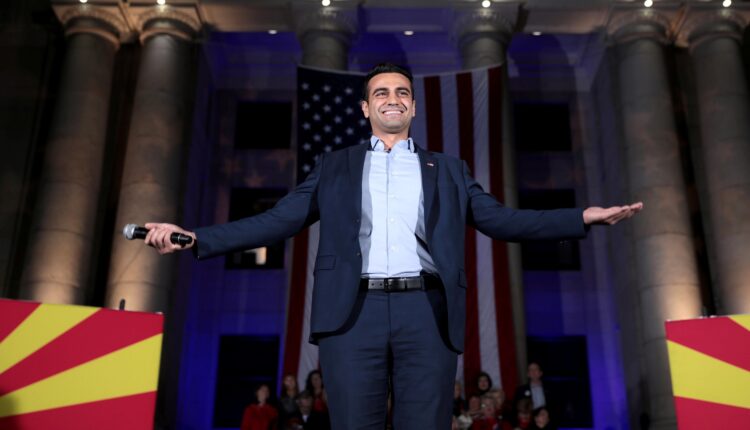 Republican Abe Hamadeh, who lost the office of attorney general by just 511 votes, filed a lawsuit against election officials across the state, claiming, without proof, that a combination of uncounted votes for him and illegal votes for his opponent cost him the election.

“At 511 votes out of 2.5 million, our race is the closest statewide race in Arizona history,” he tweeted. “Every legal vote deserves to be counted.”

The narrow margin of victory automatically triggered a recount under state law, which is currently underway. This is Hamadeh’s second election challenge; the first was dismissed for being filed earlier than state law allows.

The new lawsuit asks the court to stop the recount, overturn the certified statewide canvass and order all 15 counties to reexamine their results, making sure to include what Hamadeh claims are unlawfully rejected votes and exclude allegedly illegal ballots. By doing so, attorneys for Hamadeh and the Republican National Committee claim, the results will show that the true winner of the office of attorney general is Hamadeh and not Democrat Kris Mayes.

“The December 5 canvass and its constituent county canvasses are afflicted by election board misconduct, the tallying of unlawful ballots, the failure to count lawful ballots, and the erroneous counting of votes,” wrote Hamadeh’s attorney, Tim La Sota. “A complete and correct tabulation of all lawful ballots will establish that Contestant Hamadeh received the highest number of votes for the office of Arizona Attorney General.”

The lawsuit alleges that issues with on-demand printers in Maricopa County effectively disenfranchised hundreds of voters — a number which could prove pivotal in flipping the race.

On Election Day, around 70 polling places in Maricopa County experienced issues with tabulators being unable to read ballots printed on-site, leading to confusion as voters were asked to deposit their ballots in a separate drawer, nicknamed “Door 3”, for later tabulation or  check out of the site experiencing issues and travel to another to vote. Some 146 voters did not check out or submit their ballots and attempted to vote at another site, which led to them being required to vote via a provisional ballot. The county promised to review and count the provisional ballots if those voters had not already voted elsewhere.

Hamadeh’s lawsuit alleges that as many as 395 voters were not checked out properly due to poll worker error and later cast provisional ballots, which were not counted, or had their ballots voided because they were logged in the system as having already voted. An unknown amount, attorneys add, were prevented from voting altogether once they reached a second site after not checking out of the first.

No evidence was given to substantiate these claims.

La Sota further claims that adjudicated and duplicated ballots resulted in incorrectly counted votes. Adjudication is the process by which a voter’s intent is determined by a panel of election officials when that intent is unclear, due to legibility issues. Likewise, a duplicated ballot is created when the original was too physically mangled to preserve the voter’s original choices.

The lawsuit requests that all undervoted ballots in every county be made available for examination, to determine that no votes for Hamadeh were unduly lost. An undervote can occur when a voter makes no selection in a contest which requires at least one choice, as in the race for attorney general, in which only one candidate can be voted for.

And Mayes benefitted from illegal votes, according to the lawsuit. Early ballots include an affidavit which a voter must sign before mailing or dropping the ballot off. Election officials count those votes only after verifying the signatures match signatures on file in the voter’s registration record.

Numerous early ballots this election were accepted with signatures that didn’t match the ones on a voter’s registration, but rather other election documents, such as an affidavit filled out in a previous year, Hamadeh claims.

However, that is normal election policy, and is allowed by state law. Republican legislators amended that law several years ago to explicitly allow the use of election files beyond a voter’s registration to verify signatures.

In an emailed statement, Hamadeh vowed to keep fighting for election integrity and slammed election officials for an election he claims was rife with errors.

“Right now confidence in our elections are at an all time low due to the hubris and incompetence of election officials to not take legitimate election issues seriously,” he said. “I urge all Arizonans to have patience during this time. Laws exist in order to provide justice and the courts are the guardians of justice.”