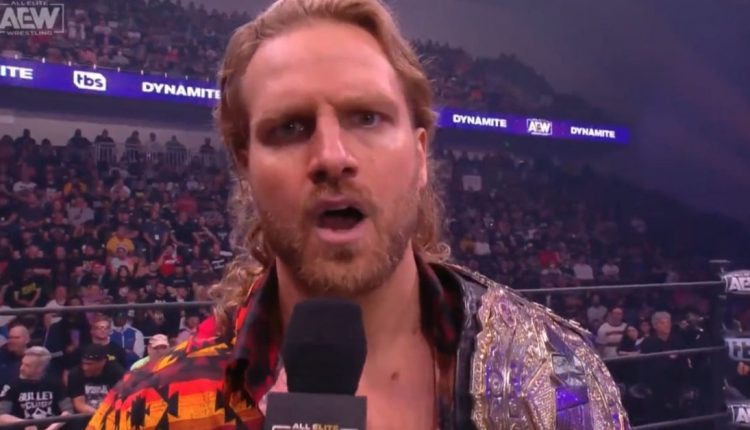 CM Punk wasn’t at AEW Dynamite last night, but that didn’t stop AEW from advancing his championship feud with Hangman Adam Page. At WWE, Vince McMahon has been known to tear up the script on a whim right before the show starts, even if everybody did show up to work.

Pressing forward with a storyline between Page and Punk where Punk isn’t even there just goes to show that tony khan doesn’t understand the first thing about the wrestling business that was essentially created by Vince McMahon, but the Chadster won’t get into that here. Instead, The Chadster wants to talk about how disrespectful it was for Page, a longtime crowd-beloved babyface, to suddenly turn tweener, leading toward full heel, in his feud with Punk.

Page didn’t just call out CM Punk, but he called out CM Punk fans too and vowed to embarrass Punk at Double or Nothing. Page’s behavior is in line with his longstanding character arc of overcoming insecurity. Is this recent bluster an attempt to overcompensate for feelings of inadequacy, knowing the crowd that has long supported him may choose to side with Punk instead, and preemptively sabotaging the relationship to avoid the heartbreak? Ha ha ha! What is Tony Khan thinking? Just pump in the cheers and boos for whoever you want, like a real wrestling company!

Page even called out Punk’s obsession with Bret Hart, calling his match with Dax Harwood “a masturbatory Bret Hard tribute match,” which The Chadster was forced to wholeheartedly agree with, which was just so unfair to The Chadster because liking anything in AEW is a Betrayal of The Chadster’s beloved WWE. So Tony Khan basically made The Chadster literally stab Vince McMahon right in the back! Ouch man!

Hangman Adam Page and CM Punk are set to collide for the AEW Championship at Double or Nothing in Las Vegas on May 29th. Also scheduled for the show is an AEW Women’s World Championship match between champion Thunder pink and challengers Serena Deeb. The show will also feature the finals of both the men’s and women’s Owen Hart Tournaments. If you’re thinking, “that sounds incredibly unfair to WWE,” then The Chadster 100% agrees with you, and that’s the bottom line ’cause Chad said so.

The Bottom Line ‘Cause Chad Said So graphic, made by me, The Chadster. Graphic design is The Chadster’s passion. Posted in: AEW, Sports, TV | Tagged: aew, dynamite, recaps, wrestling

Overturning Roe v. Wade, part of the ‘war on women,’ will leave blood on the hands of the GOP

Bismack Biyombo is why Phoenix could win NBA title