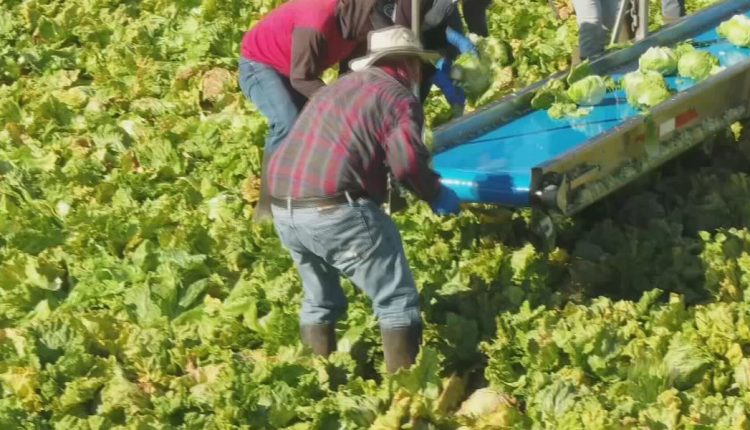 YUMA, AZ (3TV/CBS 5) – Could the lettuce you see on store shelves not only in Arizona but nationwide become harder and harder to find? That’s at risk of being the case with ongoing water woes and more potential water cuts in Yuma. It all comes down to if an agreement is reached and what that agreement looks like.

The water cuts made by the Bureau of Reclamation to the Colorado River that will affect Pinal County farmers will not affect Yuma farmers. Still, the bureau said there needs to be a million more cuts to the water, and Yuma farmers may take the brunt of it.

The big picture problem: Yuma provides 90% of the nation’s leafy greens like lettuce and spinach during the winter months, and now that could be at risk.

Anybody who’s driven from the desert of the Valley to the San Diego beaches passes through the stretch of agricultural land along Interstate 8: Yuma, Arizona. “It is a climate that isn’t really replicated anywhere else in the world in terms of how we can grow and how long we can grow and what we can grow,” said Chelsea McGuire, Director of Government Relations with the Arizona Farm Bureau.

Yuma is the biggest provider of produce like romaine lettuce, spinach, broccoli, and onion seeds across the United States in the winter months, but that could change. “We may not see every aspect of the produce counter full all throughout the year,” McGuire said.

This month the Bureau of Reclamation announced Colorado River water cuts to farms in Arizona amid the drought. That didn’t affect Yuma farms, but something else could. “That’s not kind of where the bureau stopped. They said earlier before they announced the Tier 2A that we’re going to need an additional 2-4 million acre feet to stay in the river to avoid a crash, a catastrophic situation,” McGuire said.

McGuire said the Yuma farmers came up with a plan for the Bureau of Reclamation — their farmers are willing to take a one-acre foot of water less per acre. That would total about 925,000-acre-feet in water cuts, a significant chunk but well below that 2-4 million number set by the bureau.

“They’ve basically come to the determination that that’s as much as they can take and still stay in business and keep producing,” McGuire said.

So, all these numbers, what does that mean for you at the grocery store? “The most basic consequence is that we’re going to see significant decreases in availability and significant increases in price,” McGuire said. “We can buy romaine lettuce any time of year in the stores, it’s grown in different places, but we can access it. That may not be the case anymore.”

McGuire said ultimately, the Bureau of Reclamation can decide how much more in cuts they’ll take from Yuma farmers at any time. She said behind the scenes; this comes down to a lot of politics. While negotiations are ongoing among Yuma farmers, some California farmers, and the bureau itself, there’s no timetable at the moment of when this will all get figured out.