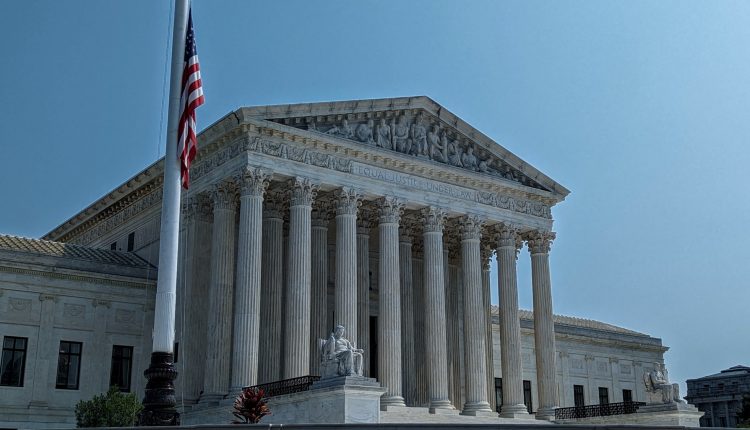 Voting rights advocates fear that the high court’s conservative majority will further weaken the Voting Rights Act, with implications for voters in states across the country.

The case, Merrill v. Milligan, considers whether the 2021 redistricting map for Alabama’s seven congressional districts violates Section 2 of the Voting Rights Act because it dilutes the collective voting power of Black voters.

Black voters are spread out across the other six congressional districts, and don’t make up a majority in any, under the map. Those challenging the map say there should be one more majority-Black district.

Section 2 of the Voting Rights Act prevents any state from imposing election practices that result in the denial of the right to vote based on race.

LaCour argued that the Black voters suing the state failed to meet a legal test in Section 2 of the Voting Rights Act, under which they are required to show that the map is an illegal racial gerrymander. That requirement is laid out in the court’s 1986 decision in Thornburg v. Gingles.

Jackson asked why LaCour was calling the map a neutral plan because the tests “are designed to establish that there may actually be racial discrimination working in this particular situation.”

“These are really tough things to establish and collectively, they show that it’s not neutral, the situation that we are approaching,” Jackson said. “We’re talking about a situation in which race has already infused the voting system.”

Deuel Ross, a lawyer with the NAACP Legal Defense and Educational Fund representing the Black voters challenging the congressional map, told the court that there was nothing “race-neutral” about the Republican-drawn map.

Both liberal and conservative justices rejected the state’s claim that in order for the plaintiffs to prove there was a violation in the maps, they needed to show that the state intended to discriminate when drawing the districts.

Justice Samuel Alito said that argument was “far-reaching,” and tried to focus on one of Alabama’s “less far-reaching” arguments, in which Alito said the state is really arguing that the plaintiffs don’t meet certain criteria under Gingles.

Sotomayor said Alito “gave the game away,” by suggesting an amendment to the Gingles test. Such an amendment would make it harder for groups to overcome an early hurdle to bringing claims of voting discrimination.

“The point that he’s making turns Section 2 (of the Voting Rights Act) on its head, doesn’t it? Because there’s no such thing as racial neutrality in Section 2,” she said. “It’s explicitly saying that a protected group must be given equal participation.”

Since 2013, the court has heard several cases pertaining to the Voting Rights Act, with each decision either gutting or limiting its federal protections.

The court struck down the Section 5 pre-clearance requirement of the Voting Rights Act, which covered nine states — including Alabama — and a handful of counties and municipalities with a history of discriminating against voters of color.

Kagan noted that the court has weakened the Voting Rights Act over the years, despite it being “one of the great achievements of American democracy.”

Kagan also affirmed a decision by a lower court throwing out the map, saying that “it’s kind of a slam dunk,” and that the Alabama case was trying to “change the way we vote.”

On Jan. 24, a three-judge panel found that Alabama’s new congressional map is likely to violate Section 2 of the Voting Rights Act.

The panel, in which two of the judges were Trump appointees, gave the state’s legislature the opportunity to redraw the map, and also stated that the new district would likely give Democrats another seat in the U.S. House of Representatives.

However, in February, the U.S. Supreme Court’s majority conservative bloc voted 5-4 to bar the lower court ruling that would have required the state to draw a second Black majority district in time for the November midterm elections.

The state of Alabama appealed to the Supreme Court, not wanting to draw a second district that would be majority Black.

Challengers of the map want the court to uphold the lower court’s ruling. They also want the court to reject the state’s argument that places a burden on the plaintiffs to prove that a challenge to a congressional map is “only by racial discrimination.”

Abha Khanna, who is arguing on behalf of the Black voters in the case, said the state of Alabama is asking the court to change the law of Section 2 “that has governed redistricting for nearly 40 years.”

“Nearly every majority minority district would become a litigation target,” she said, adding that the state’s “reliance on untested simulations would unravel decades of progress and take us back to a time with little to no minority representation at the federal, state and local levels.”

An opinion on the case is expected sometime next year.

Another elections case set to be heard at the U.S. Supreme Court this year, Moore v. Harper, is about the newly drawn maps for North Carolina’s 14 congressional seats. The North Carolina Supreme Court found the maps violated the state’s constitution because of gerrymandering. State Republicans argue that the U.S. Constitution’s Elections Clause gives state legislatures the ability to define congressional districts without the checks and balances of the state constitutions or courts.