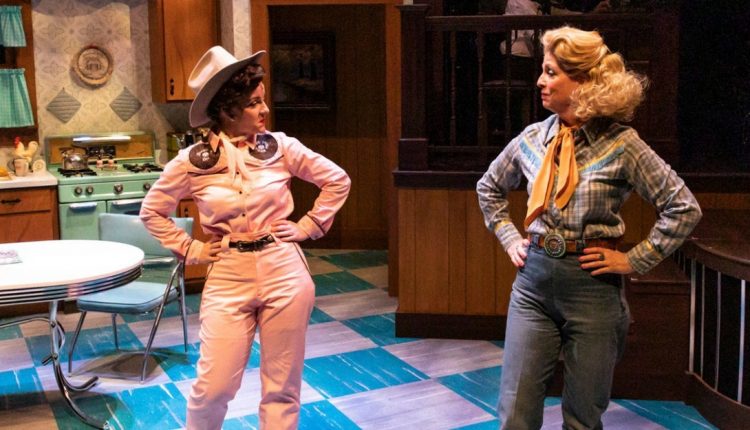 In The Phoenix Theater Company’s penultimate show for the 2021-22 season, the audience is gifted with a story about the friendship between Louise Seger and Patsy Cline. As music lovers, listeners often feel a connection or personal relationship with its creators. In the case of Louise Seger, she made that connection a reality as told in the biographical Always…Patsy Cline. So much more than a typical jukebox musical, this two-person show offers laughs, sentimentality, warmth, and delight that only a brief journey can bring through a random happenstance and a lot of southern hospitality.

Based on a true story, Always… tells the tale of a bored but exuberant Texas housewife, Seger, who hears Cline while her children are watching the television show, Arthur Godfrey’s Talent Scouts. From the instant Seger hears her voice, she becomes mildly obsessed and begins calling into her favorite radio station to request I Fall to Pieces by Patsy Cline four or five times a day. One day during her daily request, DJ Hal Harris tells her that Cline is singing at the Empire Ballroom near her town. Seger decides to get there hours early, where she meets Cline, and thus the journey of their friendship unfolds.

In the opening number, Cassie Chilton as Cline belts out Honky Tonk Merry Go Around, mimicking a performance at the Grand Ole Opry. Right from the get-go, Chilton catches you with a playful twinkle in her eye, a little growl in her voice, and the bravado of this cherished singer, who was a trailblazer in the entertainment industry. While she says precious little in this show (the show is narrated through the experiences of Seger) her eyes, physicality, and voice say everything that one needs to hear. From previous theatrical performances and as a member of local band Cass and Crossland, Chilton is known for the purity and clarity in her soaring vocals as a soprano, so there was concern that the deep, rich notes of Cline’s lower register would be lost in favor of that. That worry was allayed when Chilton sang Seger’s favorite song, I Fall to Pieces, mid-act. Even remembering it now, the experience was something truly transformative that hit the gut, traveled up to the heart, and was held captive there. Her performance was mesmerizing, truly honoring the singer’s memory.

As the animated housewife Louise Seger, Katie McFadzen was the perfect yin to Chilton’s yang. McFadzen’s comedic timing, facial expressions, and movement were perfection; that car ride choreography is one of the greatest body manipulations seen. She conveys the care and love that Seger had for Cline and captures the heart doing it. People should all be so lucky to have her as a friend. And while Chilton does most of the singing, McFadzen does sing with her in act two, with beautiful harmonizing and a big voice all her own. She is a master storyteller, driving the story. There is never a dull moment, no lagging awkward spaces, or weaknesses. McFadzen is a force of nature from start to finish that makes one laugh, smile, and yes, even shed a tear. The joy that McFadzen and Chilton bring together on the stage is palpable.

Not to be left out of the equation is the creative team and orchestra. Expertly directed by

Debra K Stevens, this show held its magic from start to finish. Kevin Robert White, the music director, conductor, and pianist hit the mark on every aspect of the music by drawing the audience in at the right moment every time; Ken Skuggs (steel pedal guitar), Andrew Gonzalez (guitar), Nathaniel de la Cruz (bass), and Michelle Chin (drums) were just lovely and important in bringing the music to life. As Patsy’s band, they were also fun to watch, especially in their interactions with Louise. Thank you to sound designer Ryan Peavey for giving us that rich blend onstage while not sacrificing quality. Scenically, Aaron Jackson designed a set that’s part vintage kitchen, honky tonk bar, and raised platform stage, as well as Sarah Harris’ props take you back to the moment of their friendship like it was yesterday. Ashley Gamba and Josh Lutton complement it with their outstanding costumes and head-turning hair and makeup. Patsy’s costume changes expertly represented the timeline of her career but also her style, from the signature red-fringed dress to the sequined dress she wore at the Grand Ole Opry. This attention to detail was also present in the wigs worn by Chilton and McFadzen (the bounce on it with every head toss is wonderful). Finally, this is beautifully lit, bringing the story in and out of flashbacks with designs by Nathaniel White.

This show is a love letter to friendship and the music that inspired it. This production was a wonderful homage to both those, with each element skillfully rendered. As a melophile, even sometimes a melomaniac, most musicals I see with well-known songs rarely work on the elements in tandem, and some part of the production is sacrificed. That is not the case with Always…Patsy Cline. There are still more opportunities to see it until August 7. Go and take a friend, share a drink, toast to friendship, and cherish every moment together. As is said on Patsy’s resting site, “[As] Death Cannot Kill What Never Dies: Love” – ​​and this show is filled with it.