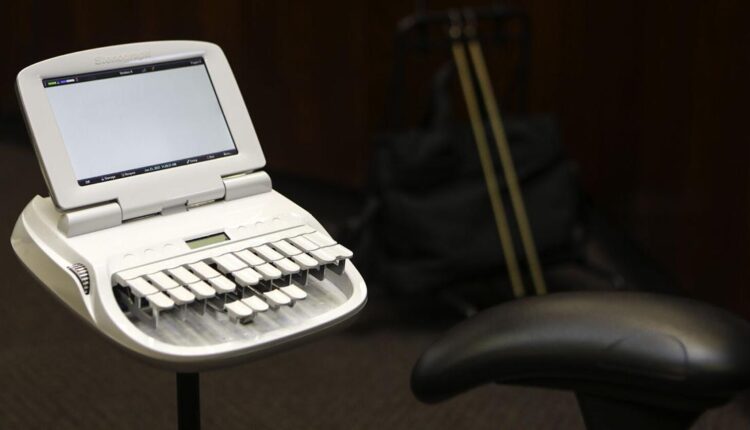 Are court reporters a thing of the past? Coconino County Superior Court only has one left

Judge Dan Slayton, Coconino County Superior Court’s presiding judge, says he believes “a court reporter should be available for every court proceeding that a judge has.”

At the county courthouse, however, there is only one court reporter on staff.

During court proceedings, court reporters often fade into the background. They’re among the quietest cogs in the wheel of the justice system. They are the men and women typing on stenography machines, or using similar equipment, to make a clear and complete record of what happens in the courtroom.

For hundreds of years, the work of court reporters has been critical. They’re the ones who make sure admitted testimony and judicial rulings are cemented accurately into a physical record.

Slayton said he was “raised on court reporters” and has witnessed their work from the bench — and from his seat at the prosecutor’s table years prior.

“I have seen the value of having an actual person taking down the proceeding as opposed to a machine.

A human can say, ‘Can you repeat that? I didn’t get that,’ when something is mumbled or unclear. A machine will take whatever goes through the microphone,” Slayton said.

In a perfect world, Slayton would like to have five or six certified court reporters on staff. That way there would be stenographers available for tasks such as court proceedings when emotions and tensions can run high and it’s common for parties to misunderstand or misunderstand the judge.

Then, a court reporter or stenographer’s physical record can be an important reference point. When criminal cases are reviewed for appeal, the record can be even more important.


“Legally, because of statutory changes introduced by the Legislature, there are only a few types of hearings that require a court reporter,” Slayton said.

Those proceedings include sentencing, death penalty cases, grand jury proceedings and…not much else. According to Slayton, there are jurisdictions in Arizona that do not have and haven’t had a court reporter for some time. They simply haven’t needed one.

According to Coconino County Superior Court administrator Sharon Yates, proceedings are subject to audio and video recording. Even when a court reporter is not present, there is still a record being made. However, that record might not be available on paper until it is requested.

“I’ll tell you right out, I’m not in favor of it, but that’s the way it’s going,” Slayton said.

Audio and video recording equipment can be updated in courtrooms, but technology isn’t always reliable.

“We had a proceeding in which a judge had three hearings. One was recorded, one was not recorded, and the third was, in fact, recorded. It looked like it was recording everything, but there was one hearing in the middle and it was a significant issue,” Slayton said.

He also mentioned that there are challenges associated with making a complete and accurate audio record — even when equipment is cooperative.

Attorneys at trial, particularly during serious criminal proceedings, don’t tend to stay near a fixed microphone. They walk round the courtroom. They address the jury.

Slayton said while the court can explore purchasing high-quality lapel microphones or headsets for counsel, that move comes with pitfalls as well.

“In a serious criminal case, you don’t want a client leaning over to their attorney and whispering something like “I did it” on the official record. It’s presenting opportunities for change and growth,” the longtime judge said.

The presiding judge will be the first to say he’s old school when it comes to having court reporters present, and the future of the judicial system won’t arrive without growing pains.

Being down to one local court reporter has Coconino County Superior Court utilizing zoom to enlist per diem court reporters from outside the area to take down the official record remotely.

“There you get the sum of new and old,” Slayton said. “The court reporter is there and can say, ‘I didn’t hear that,’ if there is a delay or something is unclear. They can still hear and see the proceedings remotely. She can stop the proceedings, just like she would if she was here personally.”

The system is working for now, but Slayton and Yates say they’re still hoping to hire more personnel.

“We would love to have court reporters here. I’m still of the mind that they are an essential and necessary part of our judicial system,” Slayton said.

According to Yates, the positions are funded — with a boost in court reporter pay.

A court reporter-stenographer at the Coconino County Courthouse will make $61,568.00-$70,803.00 a year, according to the current job posting. The county is also offering up to $2,000 in relocation assistance, a $500 hiring bonus and additional transcript income opportunities.

Some incentives are provided to combat one of the main drivers of attrition for government workers in general, and one of the main reasons why hiring is tricky: Flagstaff’s cost of living.

“We’ve had a couple of court reporters that would have been perfect and were well qualified and they looked at the cost of living in Flagstaff and said, ‘I can’t do it.’ It’s hitting a lot of government agencies,” Slayton said.

The other challenge in hiring more court reporters goes back to the way times are changing.

“There just aren’t that many people learning the art of court reporting,” Slayton said. “It’s a major change for courts. We have to adjust.”