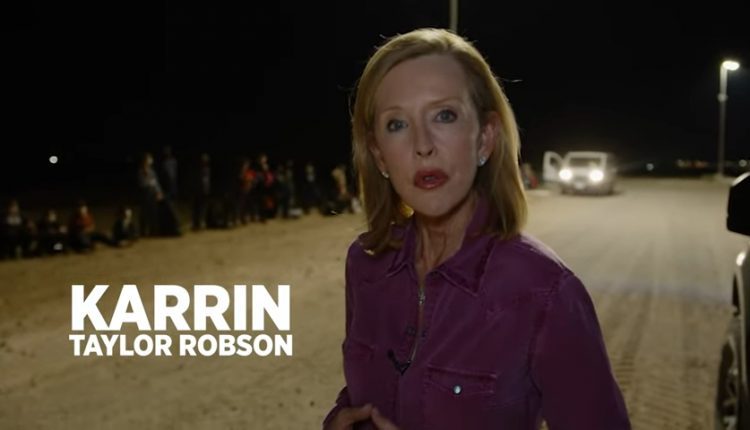 When Karrin Taylor Robson, a Republican candidate for governor, launched her first campaign ad last week, I did a double-take.

Was this the same woman who Republican consultants pitched as the anti-Kari Lake, the “moderate” in the race who wouldn’t peddle Q-Anon conspiracies and Trump fantasies?

If so, we’re in trouble.

In Robson’s first ad, she stands near the border at night, her white face gleaming, her voice a whisper as she speaks of the so-called failures of the Biden administration. The ad cuts to footage of brown people walking behind her during the middle of the day, people she identifies as “illegal immigrants,” (though I highly doubt she or her team questioned any of those individuals) as she promises to “finish the wall.”

Her second ad isn’t any better. A scary voice-over man makes claims of a “border invasion” while she sports goggles and a gun and declares herself a “true Trump supporter” who will “safeguard our elections.” She highlights her statements with footage of Trump autographing the border wall and grainy video of what appears to be the Trump-inspired protest that happened outside of the Maricopa County Elections Department.

The ads are so over-the-top that Robson comes off as more of an SNL caricature of a politician than as someone who has a real understanding of the responsibilities of a governor or the problems facing our state, which include soaring rent and housing prices as well as under-resourced and short-staffed schools, none of which is mentioned in her ads.

But Robson’s ads could have easily been filmed — word-for-word — by Kari Lake, who never misses the opportunity to brand herself as the Trump-endorsed candidate who still rejects the results of the 2020 election.

Or Matt Salmon, who is trying to win the nomination by out-Trumping Lake and reminding voters that what differentiates him and Lake is that he’s a lifelong Republican while she was once a Democrat, a truly unforgivable sin.

There is no daylight between these three candidates. They behave like the fictional Stepford wives, individuals who have lost their own identities and are completely submissive to one man, Donald Trump.

To be sure, candidates from both sides of the aisle use similar, partisan talking points when appealing to the base.

But what’s different this time around is that Lake, Robson, and Salmon aren’t simply parroting similar policy proposals. In fact, I’d say they’ve abandoned policy altogether in favor of campaigns centered on one thing: hero-worship of a twice-impeached, mob-inciting, ex-president.

This is scary as hell for those of us (and this includes a good number of Republicans) who want to maintain democratic elections and avoid another January 6.

There is no daylight between these three candidates. They behave like the fictional Stepford wives, individuals who have lost their own identities and are completely submissive to one man, Donald Trump.

In case you haven’t been paying attention, Donald Trump is planning to run for president again in 2024, and barring some miraculous act of God, he’ll win the Republican nomination. I believe it’s also likely he’ll lose the general election, especially as Americans tire of the chaos and conspiracy theories that dominate right-wing politics.

And if that happens — if Trump wins the Republican nomination but once again loses the general election — does anyone believe Trump will accept defeat and move on?

Trump will rally his supporters — many of whom are heavily armed and a frightening number of whom think violence is justified — and call on the governors and secretaries of state and Republican legislators in swing states to take extraordinary steps to thwart the will of the people and install him as president.

This is what he attempted after the 2020 election, and if not for a handful of governors and secretaries of state who resisted his pleas and upheld the rule of law, January 6 could have thrown our country into a constitutional crisis and possible civil war.

Imagine what would have happened had Gov. Doug Ducey answered the call from Trump and refused to certify Arizona’s election? Or if Georgia Secretary of State Brad Raffensperger obeyed Trump’s order to “find” another 11,780 votes to flip Georgia’s results to Trump? Or if Vice President Mike Pence accepted Arizona’s alternate slate of electors?

Arizona is poised to be a swing state in 2024. It is crucial that our state have a governor and secretary of state who will not crumble under the pressure of a dictator wanna-be and his angry mob of supporters.

Considering the shameless manner in which these Republican robots have pledged their devotion and loyalty to Trump, I find it impossible to believe they will stand up to him, even if following him means overturning the results of an election and throwing our country into chaos.

The eyes of America will be watching our state in November.