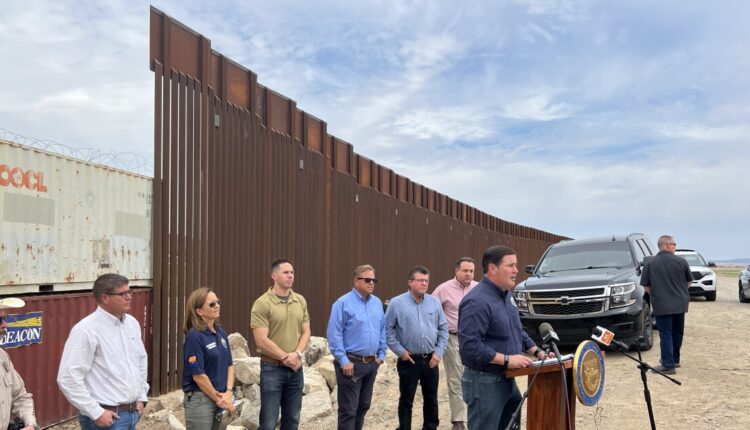 PHOENIX — Outgoing Arizona Gov. Doug Ducey has agreed to remove all the shipping containers he has installed along the border.

But his press aide insists his boss is not caving in in the wake of a lawsuit filed against Arizona state by the Biden administration threatening to remove the barrier and then bill the state. In fact, CJ Karamargin said the deal actually is a victory because it gets Ducey what he wanted all along: a commitment by Washington to start closing gaps in the existing wall.

In a stipulation filed in federal court Wednesday, Ducey promised to take out not just the containers near Yuma but all “associated equipment, materials, vehicles and other objects” from the property of the United States by Jan 4, “to the extent feasible and so as not to cause damage to United States’ land, properties and natural resources.”

And the governor separately agreed to begin discussions with the US Forest Service to take out the containers already installed in Cochise County on a schedule to which all sides agree.

The agreement comes in the lawsuit the Biden administration had filed earlier this month asking a federal judge to force removal of the hundreds of double-stacked containers — or to allow the feds to remove the items and then bill the state for the costs. And, up until Wednesday, Ducey had refused.

What changed, Karamargin said, is that there are now assurances the Biden administration is ready to start filling gaps on its own, with construction starting before the end of the year. And he said what also changed is the situation along the border.

“The problem has gotten worse,” Karamargin said. “And the White House has apparently realized it.”

He said that includes border cities like El Paso and Yuma being flooded by immigrants. And all this comes as the US Supreme Court will decide whether to lift Title 42, the Trump-era regulation that allowed the federal government, under the excuse of protecting against COVID-19 spread, to immediately deport those seeking asylum.

Any move to fill gaps is a sharp departure for the president.
On his first day in office he halted further work on the border wall that had been started by his predecessor. And while the administration had made previous statements about filling some gaps, Karamargin said this is the first clear indication there will be some immediate action.

“Better late than never,” he said.

Less clear is whether Ducey’s promise to act, which appears to be binding on Katie Hobbs who takes office on Jan. 2, ends the litigation between Arizona and the federal government.

In an earlier lawsuit, Ducey contended the state had a right to erect the barriers along the border. And he asked a federal judge to declare that the “Roosevelt Reservation,” a 60-foot-wide strip along the border that President Theodore Roosevelt declared as federal land, which was illegally enacted.

The new document spells out that the stipulation “is not a waiver of any rights, claims, liabilities, or defenses.”

That theoretically allows the underlying case — and the dispute of ownership of the land — to continue. And Karamargin said there has been no decision whether Ducey, in his remaining days in office, will drop the claim of state ownership.

That, however, may be a moot point.

Construction of the planned 10 miles in Cochise County effectively has been halted after protesters blocked crews from working.

More to the point Hobbs told Capitol Media Services she intended to halt further installation once she takes office. More to the point, the incoming governor said she believed that Ducey’s decision to put the storage containers along the border was wrong.

“It’s not our land to put things on,” she said.

“It’s a political stunt,” Hobbs said. “And I think it’s a waste of taxpayer dollars.”

The governor’s office put a $6 million price tax for filling in a 3,820-foot gap near Yuma. But a 10-mile stretch now being constructed in Cochise County will set taxpayers back another $95 million.

Funding for construction came from a $335 million appropriation approved by the Republican-controlled legislature.

Only thing is, the wording of the restrictions on that account, known as the Arizona Border Security Fund, allows the cash to be used solely to erect a barrier. That means removing the containers would require the legislature — which still will be in the hands of Republicans next year — to approve a new appropriation or reword the old law.

Family, loved ones mourn life of murdered Army veteran during vigil in Phoenix