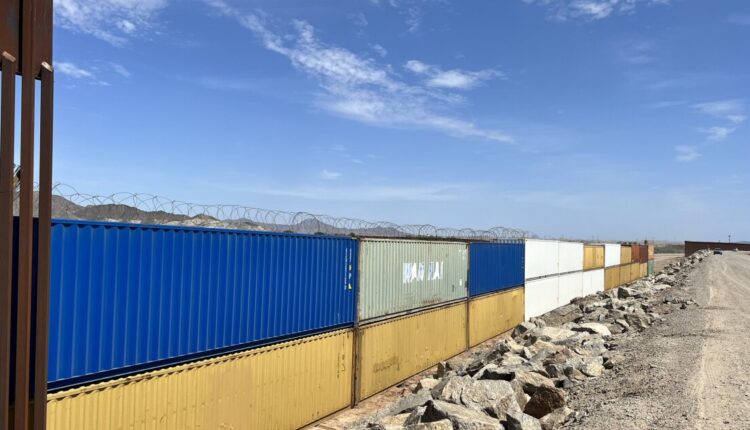 PHOENIX — Incoming Arizona Gov. Katie Hobbs is going to stop any further work on building a wall of storage containers on the state’s southern border.

She said this isn’t just a matter of the state acting illegally. She said the maneuver by lame-duck Gov. Doug Ducey in August to put a double-high wall of containers along stretches of the border after incoming President Joe Biden halted the wall being built by former President Trump makes no sense.

“It’s a political stunt,” she said. “It’s a visual barrier that is not actually providing effective barrier to entry,” Hobbs said. “And I think it’s a waste of taxpayer dollars.”

And there are a lot of dollars.

The governor’s office put a $6 million price tax for filling in a 3,820-foot gap near Yuma. But a 10-mile stretch now being constructed in Cochise County will set taxpayers back another $95 million.

“I feel we could use that money much more effectively,” said the governor-elect.

But actually taking the containers down?

That, for the moment, is another question. An aide to Hobbs said there was no decision.

And there’s another complication: money.

The funds that Ducey is using on the project comes from a $335 million appropriation approved by the Republican-controlled legislature.

Only thing is, the wording of the restrictions on that account, known as the Arizona Border Security Fund, allows the cash to be used solely to erect a barrier. That means removing the containers would require the legislature — which still will be in the hands of Republicans next year — to approve a new appropriation or reword the old law.

The statements by the incoming governor come even as Ducey is asking a federal judge to declare that the 60-foot strip of land along the border where the shipping containers are being erected actually belongs to Arizona.

He contends President Theodore Roosevelt lacked the legal authority to issue the 1907 edict. And that, according to lawyers Ducey hired at taxpayer expense, voids any claim by the US Forest Service and the Bureau of Reclamation that placing the containers along the border “is a trespass against the United States.”

Hobbs’ comments put her on the same side of the legal fight as the federal government. And at that point, the state’s legal fight should go away.

US District Court Judge David Campbell has not yet set a hearing on the case.

Ducey has gotten praise for the ersatz wall from Yuma County Sheriff Leon Wilmot, a Republican like the governor, who says it has helped keep Yuma safe and “helps put a stop to the revolving door for cartels that has been the southern border.”

But those feelings are not shared by David Hathaway, the Democratic sheriff of Santa Cruz County. He contends that the claims about the number of people entering the county illegally amounts to “a lot of fuzzy math,” with the numbers inflated by counting the same people who come and go over and over again.

Hathaway said he also agrees with both Hobbs and federal agencies that Ducey’s storage containers are trespassing on what is clearly federal land. But the sheriff told Capitol Media Services he is disappointed that the federal agencies have until now have only sent warning letters and not intervened to actually block further construction or remove the existing containers.

But Hathaway said he doesn’t intent to sit idle when the construction crews, building the barrier from east to west, reaches his county line.

“What they’re doing is illegal,” he said. “That would be my intent to charge them with illegal dumping,” Hathaway explained. He said it’s no different than if anyone else left something on federal land.

In fact, Hathaway said, it’s worse than littering, what with heavy equipment tearing up the ground to create flat spaces to erect the storage containers.

The sheriff said there are criminal laws that are being violated. But he said it may not be necessary to actually physically arrest anyone.

Instead, Hathaway said, existing laws give him the power to seize everything from the earth-moving equipment to the flat-bed trailers because they are being used in a crime.

“All of that is facilitating the public dumping,” he said. “That would kind of be the easiest way,” Hathaway explained. “You hit people in the pocket book. You cost them money.”

He said that would be particularly true if the contractors hired by Ducey to dig up the land to create flat spots and then erect the containers are leasing the equipment — and then having to pay for the items without being able to make money as the construction is halted.

And Hathaway, like Hobbs, said he is not buying Ducey’s claim that the land really belongs to the state.

Ducey press aide CJ Karamargin brushed off Hathaway’s comments. He said there are no plans now to extend the container barrier into Santa Cruz County.

But enforcement action by the sheriff may not be necessary to bring the project to a halt.

Hathaway said the firm doing the contract recognizes it has only until Ducey leaves office to finish the project that Hobbs will halt. And that, said Hathaway, hath led to a rush.

What has stymied that, he said, is protesters have stalled construction by standing in the path of construction.

Hathaway said the workers sought to get around that this past Wednesday by shifting to night work. He said it fared no better.

“It was like a Tiananmen Square-type situation where the protesters ran in front of the earth-moving equipment, stopped them,” he said.