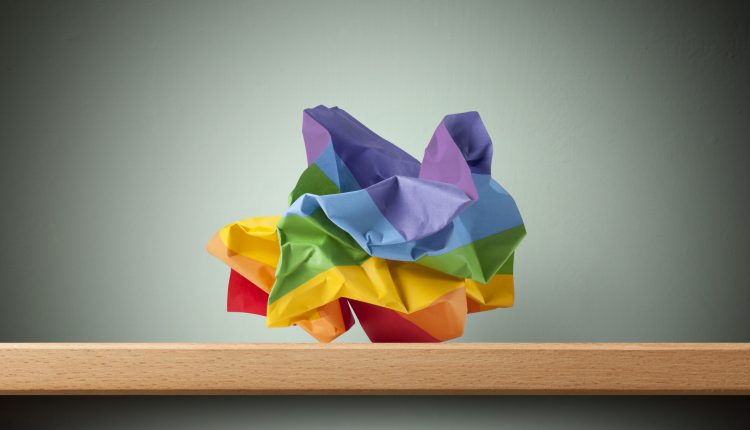 In light of the past year’s anti-LGBTQ legislation and political rhetoric, LGBTQ parents and advocates are worried Tuesday’s election could bring more of the same unless voters choose pro-equality candidates.

Derrick Fiedler moved his family from Iowa to Arizona when his 10-year-old son came out as trans, looking for a safer and more welcoming community. Confronting even more anti-trans sentiment after that was disappointing and exhausting, and he fears it still isn’t the end.

“I feel like what they accomplished this year is just the beginning. It’s just a foothold to start passing more and more extreme bills,” he said.

Over 200 anti-LGBTQ bills were introduced in state legislatures across the country. Arizona’s GOP-controlled legislature passed several of its own, including bills barring trans girls from participating in school sports, prohibiting trans minors from receiving gender-affirming surgeries and allowing parents access to any school records of their children, which critics say puts LGBTQ students at risk of being outed.

As bad as the new laws are for trans children, it could have been worse. The law banning surgery on trans youth initially would have banned all gender-affirming care, including puberty blockers and hormone therapy, which have been found to help improve mental well-being among trans youth. That version was blocked, in part, by a lone Republican vote.

But that Republican, state Sen. Tyler Pace, was defeated by a Trump-endorsed right-wing candidate, and Fiedler is worried GOP lawmakers will now have the votes to ban all health care for trans children. If that happens and his son can’t access treatment, the Fiedler family would consider moving — again.

“It just feels like it’s going to always be a fight,” Fiedler lamented.

Bridget Sharpe, director of Arizona’s branch of the Human Rights Campaign, the nation’s largest LGBTQ advocacy group, said the record wave of discriminatory legislation is a hostile move against the LGBTQ community and the only solution to prevent it from gaining further traction is to elect candidates who will support legislation that protects the LGBTQ community.

“There have been several pieces of legislation passed that are clearly anti-trans youth, anti-LGBTQ altogether,” Sharpe said. “There’s clearly a move to try and eliminate our community or at least scare us back into the closet. Our goal is to elect leaders in positions that have the opportunity to support our community and pass legislation that’s positive.”

At the federal level, that means enough Democrats to make good on the party’s promise to pass the Respect for Marriage Act into law, which would codify the right to same-sex marriage. That would preempt any future attempt from the U.S. Supreme Court to overturn the right, as it indicated an interest in doing when it overturned Roe v. Wade and struck down the constitutional right to abortion. With enough support, Sharpe hopes the Equality Act, which would prohibit discrimination on the basis of sex, sexuality or gender identity in public accommodations like housing, employment, education and federal funding, could be successfully passed. Multiple versions of the act have been introduced since 2015, but all have failed to move forward.

Losing the Democratic Party’s tenuous foothold in either congressional chamber would mean not only wasting all the work pushing through the Respect for Marriage Act, but would also open the way for anti-LGBTQ legislation at the federal level, Sharpe warned. Last year, a Republican-led effort threatened to withhold funding from athletics programs allowing trans students to participate and in August, U.S. Rep. Marjorie Taylor-Greene introduced legislation making it a federal crime for doctors to provide gender-affirming care to trans minors.

“There’s this push towards creating legislation that we haven’t had to worry about because of the makeup of Congress, (and) that’s very concerning,” Sharpe said.

At the state level, legislation discriminating against trans youth is just the beginning, warned Abby Jensen, the legal director for the Southern Arizona Gender Alliance.

Jensen, who is a trans woman, fears Republicans will pass additional laws designed to make it increasingly difficult to exist as a trans person by adding more hoops to gender identity and name changes on legal documents. That’s a dangerous prospect when as much as 40% of trans people who don’t have an identification that matches their perceived gender experience harassment.

“Making it simple to access those kinds of changes has a significant effect on trans people to live as who they are,” Jensen said. “Their ultimate goal is to erase us from existence.”

The most direct way to rebuff attempts to introduce more roadblocks into the lives of LGBTQ people and repeal laws passed in the spring would be for Democrats to win control of state government.

But that’s a tall order in Arizona, where Democrats have controlled the Governor’s Office for only six years since 1991 and haven’t controlled both legislative chambers since 1966.

For 15-year-old Daniel Trujillo, however, voting in more pro-LGBTQ candidates is imperative to creating a safer future for him and other trans minors.

“Having legislators and elected officials that are committed to trans youth matters because it gives us hope that we will live in a discrimination free world and that kids like me can live safely in the state of Arizona,” he said at a Human Rights Campaign event in early October.

Daniel’s mother, Lizette Trujillo, is keenly aware of how in jeopardy her son’s rights are if the political landscape stays in the status quo. She and Daniel became fixtures at legislative hearings on anti-trans bills in the spring, calling on legislators to vote against them. Lizette is particularly concerned with the rhetoric that makes up the discussions. She worries that the continued ramping up of anti-trans talking points from Republicans will result in violence in the same way that anti-immigrant rhetoric contributed to the El Paso shooting.

“I worry that this harmful portrayal that they’ve painted of trans people will lead someone to harm trans people — people who are already marginalized and already experience violence at higher proportions,” she said.