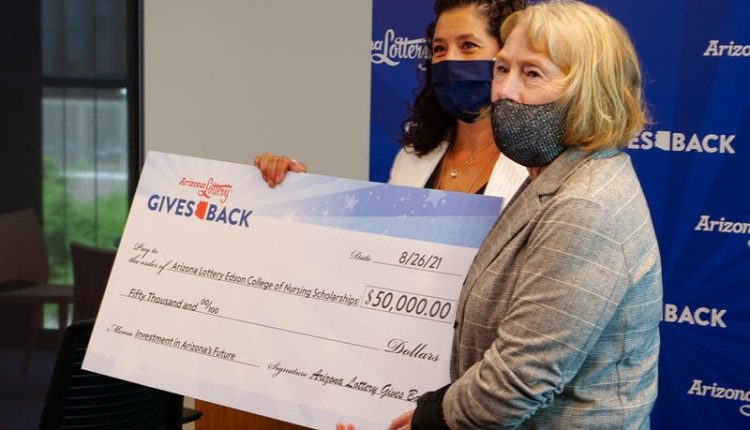 Arizona Lottery Assistant Director Sherri Zendri (left) and Judith Karshmer, Dean of the Edson College of Nursing and Health Innovation at ASU, hold a check for $ 50,000 for Edson College Scholarships on Thursday, August 26, 2021.

Working with the Arizona Lottery, three Edson College of Nursing and Health Innovation students received a total of $ 50,000 in sponsorship funds last month.

The Arizona Lottery organized the scholarship to help fund the winners’ tuition fees at ASU. The goal is to produce more nursing professionals for Arizona counties with underserved communities.

All funds were raised through the Arizona Lottery Gives Back program, which uses money that would otherwise be used for television and media advertising and instead “goes to charities that give back to our community,” said John Gilliland , a public information officer for Arizona Lottery.

“It’s a $ 400,000 program a year,” said Gilliland. “It’s something that allows us to really reach out to the community and tell our story as a lottery by helping them tell their story while also serving the community.”

The award ceremony took place in the lobby of the Health North building on the Downtown Phoenix campus. The three winners could not take part in the event. While the faculty was in person, a virtual setup was used to accommodate the winning students.

“While none of the attendees were able to attend in person, the event was definitely a success,” said Robin Krause, senior director of strategic marketing and communications at Edson College. “All three winners clearly showed why they deserved the award.”

Velasquez, a public health nurse who works in Navajo County and a nursing student, sees the opportunistic potential of the scholarship funds. For her, receiving the scholarship is “a big burden that is taken off”.

As a semi-Apache, Velasquez sees Whiteriver, Arizona as her home. Her mother, who was also a nurse, looked after her family and demonstrated both hard work and caring by taking Velasquez to school. Her connection to the community and the inspiration she receives from her mother push her to serve others.

Because of her connection to her ancestry, she is interested in working for an Indian Health Services hospital in Whiteriver.

Ordonez, who developed leukemia at the age of 12, shares her goal of being a community nurse with the nurses who have helped her with her cancer treatment. She currently works as a community health worker.

Smithson took inspiration from her peers while serving as a paramedic, which led her to eventually earn a biomedical degree and apply to medical school. She occasionally takes shifts to the emergency room to bring financial stability.

After reaching out to Ordonez and Smithson, The State Press was unable to speak to the recipients due to scheduling conflicts.

The Arizona Lottery Gives Back program is expected to continue throughout the organization’s fiscal year.

“I suggest that people keep their eyes and ears open … we’re going to sponsor great organizations that are helping so many Arizona people in all walks of life do things they otherwise couldn’t,” said Gilliland.

Continue to support student journalism by making a donation to The State Press today.

The Solution to Au Pairs’ Health Coverage Gaps May Be Simple: ACA Plans