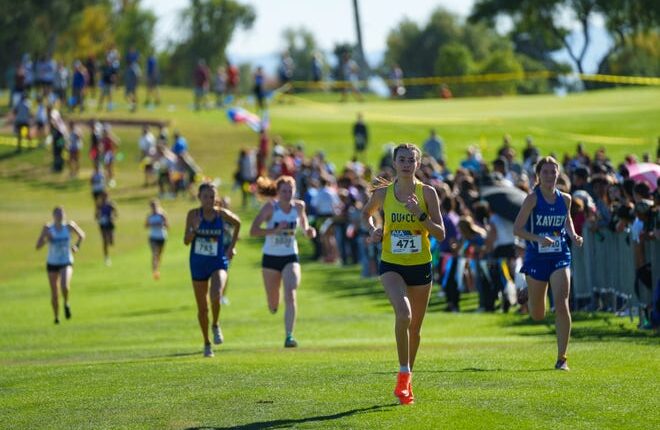 Here is The Arizona Republic’s All-Arizona girls high school cross country team for fall 2022 and coach of the year. The 12 runners also are nominees for our Girls Cross Country Runner of the Year award, which will be announced at the end of the school year as part of The Arizona Republic and azcentral.com Arizona High School Sports Awards event.

Cloe finished second at the Division I state championship in November, at 18:52.80. Cloe was one of Highland’s top runners throughout the year. She won two of her eight races this season and had a personal best when she finished first at the AIA Sectional meet with her time of 18:22.5.

Emma finished first at the Division I state championship in November, with a 18:46.8 time, leading Highland to their second championship in a row. Baugh was one of Highlands top athletes who has proven to be one of best runners on any given day.

Bia placed second at the Division III state championship in November. Bia was able to run her best race at the state championships, notching a personal best with her time of 19:14.5. Bia’s performance helped lead Chinle to the team title.

Cahoon had five top-five finishes this season and was the Division IV Metro section champion. Cahoon has been the top runner for Phoenix Country Day this season and set a personal record of 18:35.6 at the Glendale Showcase back in October.

Case had five top-four finishes in 2022, including her first win at the Fountain Hills Invitational. She finished fourth at the AIA Sectionals where she set a season record of 18:44.2 and fourth at the State Championships.

Drewry has been consistent runner all season and has had multiple top finishes and finished third at the Division I state championship. Her time of 17:49.9 at the City of Chandler cross country championships put her at number five all time in state history for freshman.

Hall won her third straight Division II championship in November, finishing with a time of 18:50.7. Hall has been a top runner all season for Flagstaff, and she was able to help lead them to their 18th title in program history and the seventh since 2015.

Hanania had five top-five finishes in 2022 and set a personal record of 19:10.5 when she finished 68th at the NXR Southwest Regional Championship. Her best finish on the season was when she came in first at the Ray Wherley Invitational back in October.

Jones finished the season with six top-three finishes and finished second in the Division II state championships at 19:24.4. Her best finish was when she took first place at the Gilbert City Championships where she set a season record with her time of 19:12.6.

Ping became a four-time state champion after finishing first at the Division IV state championship in November. She won four of the five races she participated in this season and set a personal record of 17:16.1 with her performance at the City of Chandler XC Championship. Ping is also the state record holder in the 5K.

Wild won her third straight state championship in November, at 18:40.0. She had six top-two finishes this season and ran her fastest time at the Fountain Hills Invitational. Following up her State Championship win, at the Southwest Regionals Wild finished 37th in the girls merged results, finishing the course with a time of 18:27.2.

Under Montgomery the Highland Hawks won their second championship in a row, doing it with 20 points. This was good for the lowest total score since Hopi got a perfect 15 back in 1999.

Christmas gifts for the Suns, Cardinals and Arizona’s sports teams