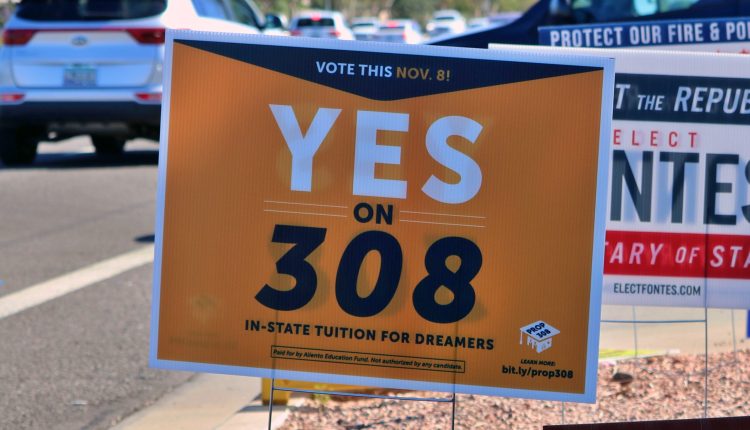 Hazel Villatoro has called Arizona her home since she was a toddler, but her undocumented status meant she faced higher tuition rates when she started applying to universities, despite otherwise meeting the same residency requirements as her peers.

But the passage of Proposition 308 this month guarantees in-state tuition and access to state-funded financial aid for every Arizona student regardless of citizenship status as long as they attend a high-school in the state for at least two years and graduate. And that means Villatoro’s future in the medical field is less precarious.

“Many doors to higher education have opened for me. I no longer have to pay three times more for tuition,” she said Monday during an online news conference. “This is because Prop. 308 passed, giving me the same opportunity as any other Arizona student. I will now be able to attend medical school with my sister to pursue my dream of becoming an anesthesiologist.”

Prop. 308 repeals parts of Proposition 300, a 2006 ballot measure that barred non-citizens from receiving state-subsidized services, including in-state tuition and state-funded financial aid. Because the prohibition was passed into law via a voter-approved ballot initiative, it could only be reversed by voters themselves.

In 2019, undocumented students were given some reprieve by a ruling from the Arizona Board of Regents, which governs the state’s universities. That ruling allowed them to pay 150% of in-state tuition instead of shouldering the cost of out-of-state rates. But, proponents of Prop.308 said, that still resulted in payments that were out of reach for many, especially when they weren’t eligible for state-funded scholarships or financial aid. The base tuition rate for a resident student at Arizona State University is $10,978, and the 150% rate undocumented students was $16,467.

The willingness of voters to roll back that barrier to higher education is indicative of a movement against anti-immigrant rhetoric, said Bob Worsley, a former Republican state senator who co-chaired the Yes on 308 campaign.

“Just 16 years ago, Prop. 300 passed with Arizona voters in support. Later, SB1070 passed, which harassed the immigrant community. But now, with the majority of Arizona voters, Prop. 308 will pass,” he said, “I am proud of Arizona and how far we have come.”

Support for the measure came from across the political spectrum, he added. As much as 83% Democrats in the state approved of Prop. 308, along with 54% of independents and 27% of Republicans.

As a Dreamer who was brought to this country as a young kid, my only goal has always been to be able to become a professional to contribute to Arizona’s workforce and community.

This across-the-aisle support is not just a stinging rebuke of anti-immigrant talking points, but a signal to Congress that meaningful immigration reform should be the next step, said Rebecca Shi, executive director of the American Business Immigration Coalition, an alliance of business and trade associations in 17 states.

“In the face of all this fear and division, there is a broad bipartisan consensus about immigration solutions. So, now it is time for Congress to act for Dreamers and farm workers before the end of the year,” she said.

Shi called on Congress to pass the Farm Workforce Modernization Act and the DREAM Act, federal legislation which would offer a path to citizenship to undocumented farmworkers and undocumented immigrants who entered the U.S. as minors, respectively. Both have stalled in the U.S. House of Representatives, and while Democrats have indicated an interest in pushing for immigration reform after the midterms, they face an uphill battle as Republicans cemented control of the House.

Congress has a busy session scheduled for the lame-duck session before new members are sworn into office, but immigration reform is not on the agenda.

Still, the success of the two-year campaign to ease access to higher education for undocumented students in Arizona is a relief for those seeking to gain a college degree. Delia Rodriguez, pursuing a career in social work, said she can breathe a sigh of relief that her funds won’t run out because of high tuition costs.

“Today, I can say that I finally feel that my dream of becoming a social worker in Arizona is not impossible,” she said. “As a Dreamer who was brought to this country as a young kid, my only goal has always been to be able to become a professional to contribute to Arizona’s workforce and community.”

A key argument from the campaign to pass Prop. 308 was that its greatest benefits lie in empowering the more than 3,600 thousand undocumented students who graduate from Arizona high schools every year to give back to their communities.

That report didn’t examine possible economic impacts of educating more Arizonans, but a study from the American Immigration Council, a pro-immigrant advocacy group, estimated that undocumented students could generate as much as $23 million in post graduation wages and contribute to $4.9 million in annual tax revenues.

Watch: As Health Costs Spike, the Role of Hospitals Often Gets Overlooked