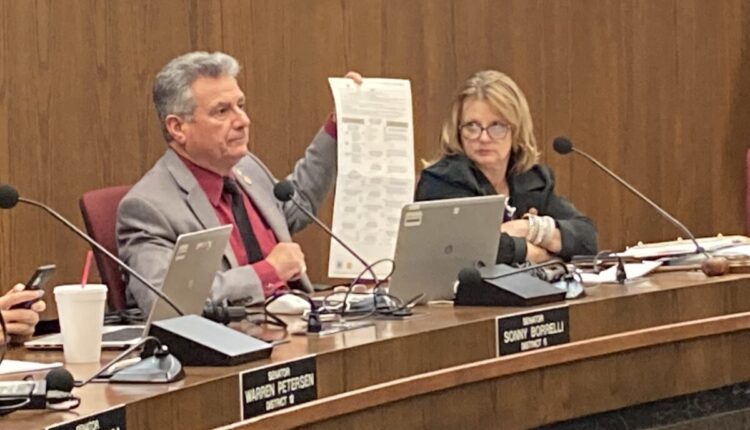 An Arizona state senator and several voters in Mohave County filed a lawsuit against Secretary of State and Gov.-elect Katie Hobbs and Maricopa County officials over the Nov. 8 midterm elections, drawing a rebuke from a Maricopa supervisor.

Backed by the Mohave Republican Party, the lawsuit was filed by Borrelli in the Mohave County Superior Court against, Hobbs, a Democrat who is the top election official in Arizona, as well as Maricopa Recorder Stephen Richer, Maricopa Board of Supervisors Chairman Bill Gates, and other members of the board.

“Because of multiple systemic failures in the conduct of the election in Maricopa County, Arizona … the voting strength of residents in Mohave County, Arizona, was diluted and their constitutional rights were violated,” the suit said, in part.

Other than Borrelli, several unnamed Mohave County voters joined the lawsuit. The suit listed “Jane and John Doe, et al” as plaintiffs alongside the state senator.

The lawsuit, he added, is “wasting the taxpayers dollars and the courts time on unfounded conspiracy,” according to his Twitter post. “Plaintiff and their attorneys must be held accountable.”

In response to Lake’s lawsuit, which also seeks to overturn the state’s gubernatorial election, Hobbs’ team suggested it would be tossed.

“Kari Lake needs attention like a fish needs water—and independent experts and local election officials of both parties have made it clear that this was a safe, secure, and fair election,” a statement from Hobbs’ campaign said. “Arizonans made their voices heard and elected Katie Hobbs as their governor. No nuisance lawsuit will change that, and we remain laser-focused on getting ready to hit the ground running on Day One of Katie Hobbs’ administration next year.”

A spokesperson for Maricopa County told Reuters that the court system is the appropriate location for election-related challenges after Lake filed her lawsuit on Dec. 9.

Bill Gates, Chairman of the Maricopa Board of Supervisors, speaks at the Maricopa County Tabulation and Election Center in Phoenix, Arizona, on Nov. 8, 2022. (John Moore/Getty Images)

Fields Moseley, the spokesman, told Reuters this week that Maricopa County, the most populous in Arizona, “looks forward to sharing facts about the administration of the 2022 General Election and our work to ensure every legal voter had an opportunity to cast their ballot. ”

After the Nov. 8 midterms, Mohave County officials delayed certification of their election results and expressed uncertainty over Maricopa County’s results. They made reference to reports of ballot printer problems in dozens of Maricopa polling locations, which were confirmed by Gates and Richer during a press conference; the two Maricopa officials, however, said no voters were disenfranchised and that the printer issue was solved by later in the day.

According to Maricopa officials, some 70 of the 223 county voting centers on Nov. 8 had issues and claimed that about 16,000 ballots couldn’t be placed in tabulating machines. They told voters at the time to place their ballots in dropboxes instead.

That drew rebuke from the state Attorney General’s office, which sent a letter demanding information about Election Day-related problems.

But Mohave’s supervisors ultimately voted to certify the election in late November after its chairman, Ron Gould, claimed that he had “no choice” to vote in favor of certification or he would be “arrested and charged with a felony.”

“I don’t think that that is what the founders had in mind when they used the democratic process to elect our leaders,” he said while casting his vote.

Another Mohave Board member, Hildy Anguis, said she faced similar legal action if she did not vote in favor of certification.

“To not certify this election at all, I think, was never our intent. It would certainly disenfranchise the voters of Mohave County and hurt our candidates who worked so hard to get elected,” she said.

Jack Phillips is a senior reporter for The Epoch Times based in New York. He covers breaking news.