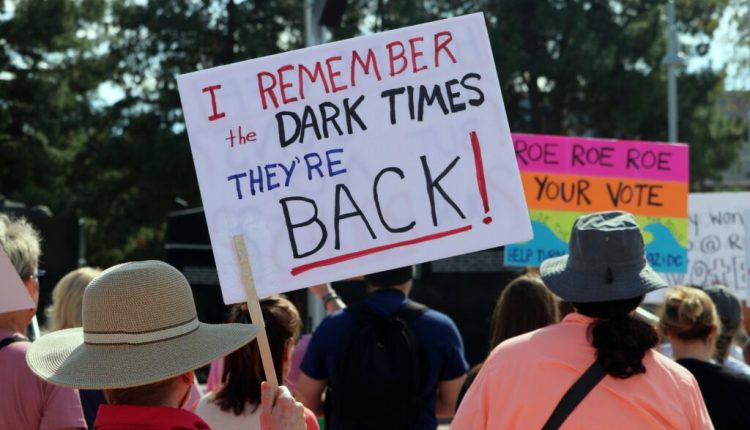 Exactly one month before the upcoming midterm elections, hundreds gathered across the street from the state Capitol with handmade posters and pink flags emblazoned with “My Body My Choice” as part of a nationwide movement to protest recent abortion restrictions and call for the election of pro-choice candidates.

Dawna Marthini joined the march in Phoenix on behalf of her 24-year-old daughter’s future. The dangers of pregnancy are especially keen for Marthini, who faced the possibility of hemorrhaging when she became pregnant after undergoing an endometrial ablation, a surgery that removes the uterine lining of women who suffer excessive blood loss during menstruation.

If not for her abortion, she might not be alive today. She worries her daughter’s doctors won’t have the same freedom to provide life-saving health care that hers did.

Women’s March Foundation, a gender equality advocacy group, organized a “Women’s Wave” day of rallies and marches in all 50 states. Rachel Carmona, the group’s executive director, said voting for women and pro-choice candidates is more important now than ever after the overturning of Roe v. Wade has led to state legislatures passing anti-abortion laws.

In Arizona, legal battles continue over whether a 15-week ban approved this year or a near-total ban from 1864 that was recently reinstated should take precedence. Neither includes exceptions for rape or incest, only to save the life of the mother.

“We are fired up to elect more women and pro-choice candidates around the country into office who will protect reproductive freedoms and reject proposals aimed at restricting abortions,” Carmona said in an emailed statement. “We are down to the 11th hour. We must work together to take back our power and ensure women have fundamental rights to their bodily autonomy, for the sake of all Americans and future generations to come.

Nona Siegel, a family nurse practitioner, said doctors in Arizona are already delaying critical care. She’s heard from several friends about OB-GYNs sending women with ectopic pregnancies, a condition wherein a fertilized egg attaches outside of the uterus and can lead to life-threatening bleeding, to emergency rooms, adding to the treatment time.

“Abortions are just a part of a complete health care continuum,” she said. “I didn’t think this would have to get re-fought.”

Siegel is no stranger to protests, having been involved in marches for the Equal Rights Amendment in the 1970s. She plans to continue being involved, but she’s disappointed efforts to overturn women’s rights haven’t stopped.

“I can’t believe there’s a power structure still trying to control women in every aspect of their lives,” she said.

The crowds, which had been milling around voter registration tables and stands selling abortion pins or flags, moved into Wesley Bolin Memorial Plaza to listen to speeches from Democratic contenders in competitive state races.

State Sen. Christine Marsh slammed her opponent, Republican Sen. Nancy Barto, who drafted the 15-week abortion ban that is currently in effect, after the Arizona Court of Appeals put the 1864 ban on hold while abortion advocates challenge it.

Marsh shared that her foster daughter was raped and became pregnant at 11, and said Barto’s law would have forced her daughter to carry the pregnancy to term. The 15-week ban has no exceptions for rape or incest and prohibits abortions after 15 weeks unless the woman’s life is in danger.

“We now live in a state where babies are going to be having babies, and this is not okay,” she said.

Marsh urged listeners to respond by voting for Democratic candidates to secure a legislative majority that would be able to repeal anti-abortion laws.

While Republicans have controlled the state legislature since 2009, Democrats are hoping for an electorate energized by the recent fight over reproductive rights. After the U.S. Supreme Court overturned Roe in June, voter registrations by women spiked in Arizona, though there are still more registered Republicans than Democrats in the state.

Rebecca Robles is part of the newly engaged voting bloc Democrats are counting on. While she hasn’t always kept up with past elections and votes irregularly, Robles said she plans to vote in the upcoming midterms.

“I didn’t vote in 2016, and you see what happened. Now, I’m encouraging friends and family members to vote,” she said.

After the rally, the crowds marched down Adams Street, making a circuit of the state legislature in the October sun. Protesters waved signs at passing cars and cheered when drivers honked in support. One woman navigated uneven sidewalks in a decked out walker and a man pushed his daughter along in her stroller, explaining that the march was meant to demonstrate their unhappiness.

Christina Traynor, 14, walked with a pink “Bans off our Bodies” banner wrapped around herself like a cape. The high school student said she is afraid for her future if abortion care is removed from her medical options.

“It’s scary. If I were to get raped and not be able to get an abortion, I’d be forced to have the baby, and I’m unemployed. I can’t even take care of myself,” she said.

Donna Carrier has been a public school teacher for 26 years and is keenly aware that her students might not be able to enjoy the same power over their own lives that she did.

“I was able to make all the choices I wanted. Why are we going back?” she asked, frowning.