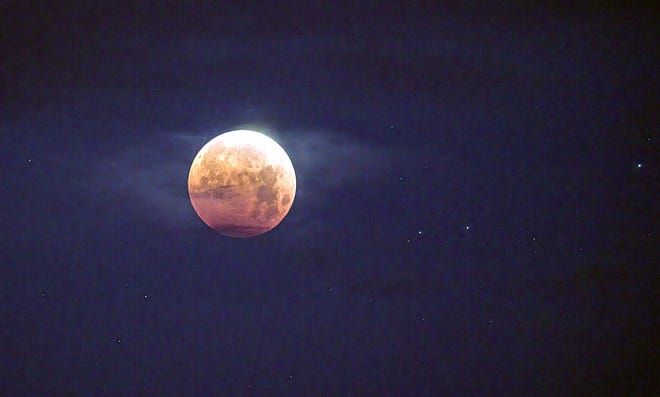 A total lunar eclipse will be visible throughout Arizona during the early morning of Nov. 8, hours before voters head out to polls to cast their ballot in the general midterm elections.

This will be the second total lunar eclipse in 2022, but another one will not occur until 2025, according to NASA.

Here’s what to know.

What is a total lunar eclipse?

Often, total lunar eclipses will dawn a reddish hue dubbing them “Blood Moons.” Naturally, the full moon of November is known as the “Beaver Moon,” a nod to the Native American Algonquin tribe and the optimal time to trap beavers in North America.

Given its timing with this year’s eclipse, however, it’s known as the “Beaver Blood Moon.”

Arizonans were last treated to the spectacle in May of this year.

Why will the moon have a reddish hue?

NASA calls it Rayleigh Scattering. Colors such as blues and violets have much shorter wavelengths causing them to scatter easily as opposed to reds and oranges. The longer wavelengths of reds and oranges allow them to penetrate the Earth’s atmosphere giving the Moon its reddish appearance.

Additionally, the more dust or clouds present in the Earth’s atmosphere at the time of the eclipse, the more red the moon will appear.

When will it be visible?

The main event will begin around 3:16 am on the morning of Nov. 8, when totality begins, NASA said.

Eclipses take place in phases though, so it requires patience for those who want to see it in its entirety. Avid night sky enjoyers will need to set their alarms for the late-night show beginning roughly at 1 am

All times are MST.

Where will it be most visible?

Arizona is situated right in the path of totality meaning those in the Copper State can witness the eclipse from beginning to end, barring any hindering weather.

“It does look like we’re gonna have some cloudiness around,” said Austin Jamison, meteorologist with the National Weather Service in Phoenix. “During the preceding day it’ll be pretty clear but we’re anticipating a slow increase of cloudiness as the night goes on.”

If you’re unable to view the eclipse or want a different perspective, the Lowell Observatory in Flagstaff will be live streaming the eclipse on its YouTube channel beginning at 2 am

Those looking to take it up a notch can purchase tickets for an overnight fundraising event located at the summit of Mt. Lemmon. Details about the event are listed here.