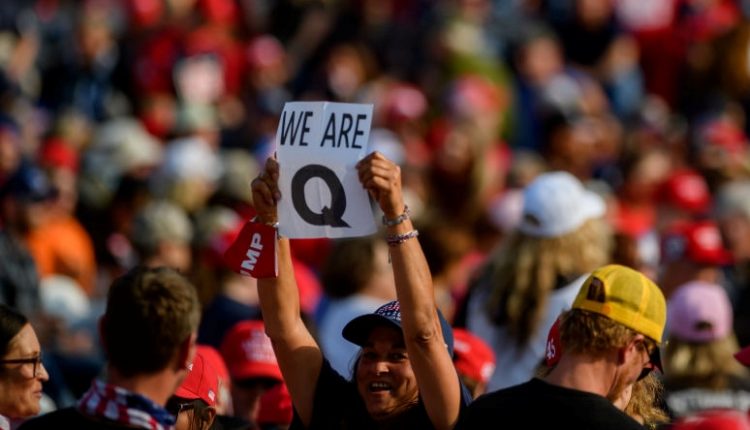 The man many believe was behind some of the infamous Q posts may have lost his bid to run for office in Arizona but a multitude of candidates with conspiratorial beliefs, including QAnon, won in Republican primaries this month, giving them a chance at being elected to public office in November.

Ron Watkins, the man widely believed to be the architect of QAnon, placed last in his bid to unseat Democratic Congressman Tom O’Halleran and left the country for Australia prior to the primary, according to QAnon researcher Julian Feeld, and may be attempting to permanently relocate there.

But Arizona and the QAnon conspiracy theory have long ties that include its politicians, some of whom made their way onto this November’s ballot.

In its simplest form, QAnon is a conspiracy theory that alleges that a cabal of Satan-worshiping pedophiles are running a global sex-trafficking ring, control world governments and are trying to bring down Donald Trump — who is himself single-handedly dismantling the cabal.

Each member can adopt their own beliefs and are encouraged to do their own “research,” and there are as a result a wide variety of QAnon beliefs. For example, some believe that the founder of QAnon, dubbed simply “Q,” is actually JFK Jr., while others believe Q to be Trump himself. JFK Jr. died in 1999 when the plane he was flying crashed into the Atlantic Ocean.

Republicans running for everything from governor to state legislature have explicitly endorsed QAnon, espoused its beliefs or engaged directly with QAnon media.

Mary Ann Mendoza was abruptly removed from speaking at the 2020 Republican National Convention after she tweeted an antisemitic thread featuring a number of QAnon conspiracy theories alleging, among other things, that the Titanic had been sunk to protect the Federal Reserve. She also tweeted references to the “Protocols of the Elders of Zion,” an antisemitic hoax.

Mendoza is an outspoken “angel mom” whose son was killed by a drunk driver who was undocumented. On her now-suspended Twitter account, she shared other similar antisemitic posts that are adjacent to the QAnon community, such as stating that billionaire George Soros is involved in a plot to create a one world government with the “Rotchild” family.

Mendoza won her primary for House of Representatives in District 9, a Democratic-leaning district centered on western Mesa.

Local real estate agent turned election “fraud” investigator Liz Harris also won her primary bid for the House in District 13, a Chandler-based district that leans slightly Democratic. Harris, who conducted a flawed canvass of the presidential election in an attempt to prove voter “fraud” has also been a promoter of QAnon.

In posts on Facebook, Harris has shared the QAnon slogan, and has also appeared on a number of QAnon shows, often promoting her work in Maricopa County, which was done alongside other well-known election deniers associated with the QAnon conspiracy theory.

When Watkins moved to Arizona, Harris owned the property that Watkins was registered to vote at. Watkins registered to vote in Maricopa County five days before he announced his congressional candidacy. This isn’t Harris’ first attempt at being elected either, in 2020 Harris failed to make it into the state legislature.

“It could be the case that there are more such candidates,” Joseph Uscinski, a professor at the University of Miami who specializes in conspiracy theories, said to the Arizona Mirror about the recent slate of candidates with connections to QAnon and other conspiracy theories. “This could have always been there and we could have not been paying such attention.”

Uscinski said the increased attention to conspiratorially minded candidates, the increased focus by candidates on these issues and more media scrutiny has raised their prevalence in people’s minds.

House Speaker Rusty Bowers, who spoke before the January 6 Committee about the pressure campaign by former President Donald J. Trump to encourage him and his colleagues to turn over Arizona’s election results, lost his bid to move to the state Senate. He was handily defeated by former state senator David Farnsworth, a dyed-in-the-wool QAnon believer.

During his last stint in the legislature, Farnsworth championed conspiracy theories and became something of a hero to the political fringe.

In 2019, Farnsworth gave an exclusive interview to the Falun Gong-backed newspaper The Epoch Times about his belief that the state’s child safety agency was behind sex trafficking, making the claim without any evidence. The reporter who conducted the interview has a record of antisemitism, racism and now hosts a program on a popular QAnon platform.

In 2020, Farnsworth told the Mirror that QAnon was a “credible group.” He said he had no idea that QAnon had been deemed a domestic terror threat by the FBI more than a year earlier — and he didn’t care.

Justine Wadsack, a local activist and member of “Purple for Parents,” a local group that has disrupted school board meetings across the state, defeated Sen. Vince Leach in the District 17 primary contest.

Wadsack has shared the QAnon slogan on her social media and interacted with local QAnon celebrity, Praying Medic. When asked about her affiliations with QAnon in 2020 by the Arizona Capitol Times Wadsack insisted the reporter was working for the “Democrats” and that reporters were working to connect all Republicans to QAnon.

Seeking higher office and espousing conspiratorial beliefs are candidates like Rep. Mark Finchem. The Republican nominee for secretary of state has appeared on a number of QAnon talk shows and spoken at QAnon conferences that featured antisemitic imagery.

Finchem also claimed without evidence in a 2020 interview with Victory Media that there are “elected officials” involved in a “pedophile network.” Finchem has also compared the murder of six million people in the Holocaust to “cancel culture.”

“You know what happened in the 1940s, right? Six million Jews were exterminated because they were dehumanized. (Kurt Tucholsky) said, ‘A country is not just what it does, it’s what it tolerates.’ We have become far too tolerant of those who would try to ‘cancel culture’ us, of those who would tell us to sit down and shut up,” Finchem said at a QAnon conference last year. “And Aristotle, another notable, said tolerance is the last virtue left of a failing society.”

Finchem has also touted the endorsement of prominent antisemite Andrew Torba, the CEO of Gab.

And Kari Lake, the GOP nominee for governor, has also engaged with QAnon. Earlier this year, she appeared on the popular InTheMatrixxx QAnon show.

During the appearance, the show’s host encouraged listeners to donate “$17, $20, $50” with 17 being a reference to “Q,” the 17th letter of the alphabet. Lake has also been photographed alongside the show’s host.

Uscinski, the University of Miami professor, said that candidates seem to be engaging more with conspiracies than they have been in the past, and “a lot of this sort of traces back to Trump.”

When Trump entered the political stage in 2015, he did so as a political outsider, decrying his opponents as members of the “swamp.”

“If you had successful experience in government, that meant you were corrupt,” Uscinski said. “He continued to use that type of rhetoric that the system was corrupt and everybody was out to get him.”

That type of thinking is a foundation of conspiratorial thinking, so Trump “leaned into it” and created a base of voters who engaged with that type of rhetoric that lower level candidates are now seeing work for them, Uscinski said. However, being outwardly a QAnon candidate might not secure some candidates a victory, according to Uscinski.

“Saying specifically I’m a QAnon follower is not going to help get anyone elected,” Uscinski said. “Saying, ‘there is a lot of child sex trafficking, there is grooming going on,’ things like that can pull in the QAnon people and people who share those beliefs.”

Nationwide, QAnon is causing issues for real world anti-sex trafficking efforts and has complicated education on those issues for researchers when it gets tangled up within the depths of QAnon.