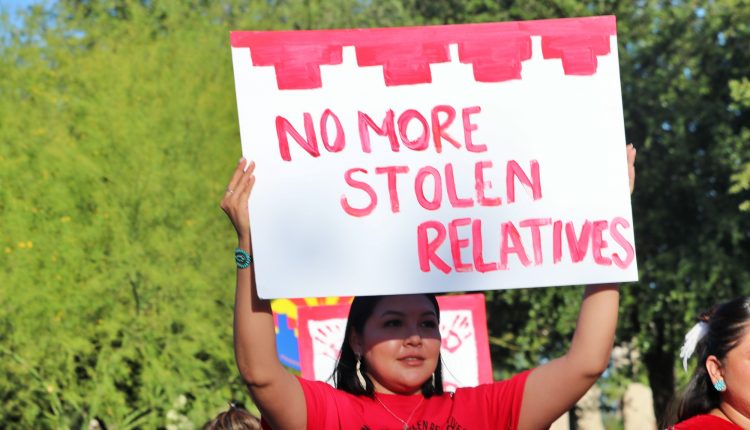 Arizona’s MMIP study committee is returning to work, with an expanded focus

Arizona’s legislative study committee on murdered or missing Indigenous women and girls is returning to work next month, with an expanded mission to investigate violence against all Indigenous people, including men, boys, two-spirits and LGBTQ.

Committee Chair and state Rep. Jennifer Jermaine said they’re looking forward to restarting the study committee and expanding their scope to missing and murdered Indigenous people (MMIP), even if it’s on an interim basis.

Jermaine and Sen. Victoria Steele, both Democrats, introduced bills in 2021 and 2022 to re-establish the Arizona MMIWG study committee to expand the scope to include all Indigenous people. The original committee’s work ended at the end of 2020.

While the provisions of the 2021 bill were eventually folded into the annual state budget, it was one of dozens of new laws in the budget that the Arizona Supreme Court ruled were unconstitutionally added to the spending plan. The 2022 measure was never considered by the Republican majority.

But Rusty Bowers, the Republican speaker of the Arizona House of Representatives, used his power to create an interim committee this year, Jermaine said. The committee he authorized has the expanded scope to include all Indigenous people in Arizona.

Jermaine said she looks forward to hosting their hearing in person for tribal communities and hearing from the people impacted by MMIP.

“We want to make sure that we are gonna be accessible to the people,” Jermaine said, adding that the committee plans on visiting several tribal communities before the end of the year. “The problem is different in every corner of our state.”

Pascua Yaqui Tribe’s Attorney General Alfred Urbina agreed to serve on the study committee, and said he looks forward to getting back to work.

“I hope we can get a little deeper into some data collection,” Urbina said. It will eventually lead to a more substantial report that will help the Arizona Legislature take action on MMIP.

Urbina’s work revolves around jurisdiction between federal, state and tribal agencies. He brings his expertise to the study committee because the Pascua Yaqui Tribe is one of the few tribal nations that can prosecute non-Native offenders in their tribal courts for domestic violence-related crimes committed within their community.

The problem is different in every corner of our state.

Urbina said when agencies from different jurisdictions work together and more laws are put in place, resources are used more efficiently and effectively because there is a collaboration.

“I believe, and I’ve seen it first hand, that it helps reduce crime,” he said.

Urbina said it is vital that the study committee now focuses on all Indigenous people because, when the original committee held its hearings, it heard from community members that they were missing whole segments of people.

“There’s people that are waiting to talk, to get their stories on the record,” Urbina said. “I think that’s important.”

The legislature established the Arizona study committee in 2019, focusing only on missing and murdered Indigenous women and girls, and it visited its first Indigenous community in December 2019.

The COVID-19 pandemic halted the committee’s in-person work, so it began holding virtual hearings throughout 2020 and conducted phone or video interviews with families and survivors.

At the end of 2020, the study committee published its first report about missing and murdered Indigenous women and girls in partnership with the Arizona State University Research on Violent Victimization Lab.

The report found that 160 murders of Indigenous women were recorded in Arizona from 1976 to 2018 and that murders among Indigenous women and girls have steadily increased over the last 40 years. The study committee is continuing its partnership with ASU as the lab continues its research into MMIP.

An Arizona Mirror analysis of the sparse available data on MMIWG cases found that more than 25% of murders involving Indigenous women in Arizona go unsolved. Additionally, the Murder Accountability Project found that one in three murders of Native Americans in Arizona goes unreported to the FBI.

A 2017 study from the Urban Indian Health Institute found that Arizona has the third-highest number of missing and murdered indigenous women and girls in the country. That study reported a total of 506 known cases in 71 urban cities across the country and 54 cases were identified in Arizona, including 31 in Tucson.

In some tribal communities, women face murder rates that are more than 10 times the national average, according to the Department of Justice.

And the National Institute of Justice found that 84% of Indigenous women experience violence in their lifetime, compared to 71% of white women.

There’s people that are waiting to talk, to get their stories on the record. I think that’s important.

Due to the study committee’s work, Jermaine said they had some wonderful legislative advances as they passed a statewide missing children’s statute in 2021 and a protective orders bill in 2022.

The missing child statute bill, House Bill 2098, was a direct result of the study committee learning that each law enforcement jurisdiction has different standards for reporting missing children. The 2021 law makes it mandatory for law enforcement agencies in Arizona to report missing, kidnapped or runaway children.

The protective order bill, House Bill 2604, increases the duration of a protection order from one year to two years and extends the duration of an emergency protection to seven calendar days after issuance. The bill also removes barriers for victims in rural communities by granting them an emergency order over the phone if the court is closed. That law goes into effect on Sept. 24.

Arizona’s MMIP study committee will be headed out into tribal communities this October, November and December to hear from more families and survivors about the issues that have impacted Indigenous communities for generations. It must complete its work before the legislature returns to work in January 2023.

The study committee hearings will be held in five locations: Sells for the Tohono O’odham Nation on Oct. 14; Tucson for the Pascua Yaqui Tribe on Oct. 28; Chinle for the Navajo Nation on Nov. 10; Scottsdale for the Salt River Pima–Maricopa Indian Community on Nov. 18; and Phoenix at the Arizona State Capitol on Dec. 19.

These hearings are open to all Indigenous people throughout Arizona to share their experiences with MMIP. Each hearing is planned to be held from 11 a.m. to 2 p.m. local time and will be recorded.

Jermaine said families attending the hearings will have the option to testify in Executive Session, which means there will be no recording or audience, but most of the agenda for the hearing will be for community testimony.

The recorded hearings will be available on the Arizona Legislature website at www.azleg.gov.

U.S. House GOP outlines agenda in bid for control in the midterms