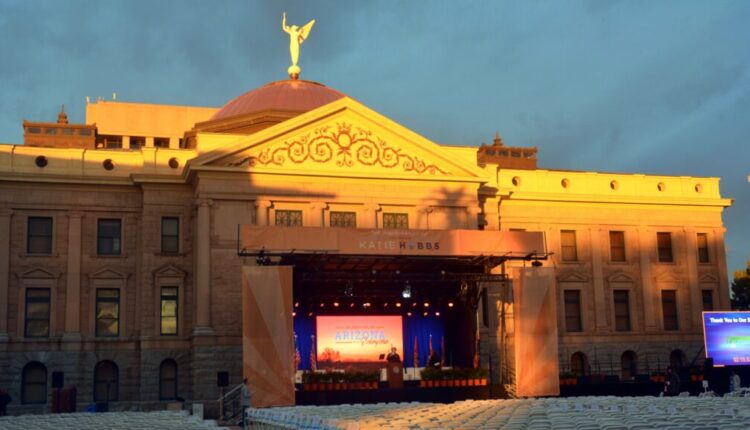 The Arizona Capitol in the early morning hours on Jan. 5, 2023, before a public inauguration ceremony for Gov. Katie Hobbs and other statewide elected officials. Photo by Jerod MacDonald-Evoy | Arizona Mirror

For nearly 14 years, Republicans have controlled the most important levers of power at the state Capitol, allowing them to increasingly become more insular in their governance and oftentimes cut Democrats out of the process entirely.

That ends on Monday, when the GOP-majority 56th Legislature convenes and its 90 members take their oath of office. Shortly after they do so, Gov. Katie Hobbs — the state’s first Democratic governor since 2009 — will present them with her vision for Arizona in 2023 and beyond when she gives her inaugural State of the State address.

Hobbs, herself a former legislator, will be leading an administration that is certain to clash repeatedly with a Republican-majority legislature that will be grappling to figure out the new political realities after nearly two legislative generations — lawmakers are limited to eight years in office — have learned how to navigate governing under a GOP governor.

And because of those term limits, there is virtually no experience in legislative corridors for dealing with a split government. Ken Bennett and John Kavanagh, new Republican senators, are the only two of the 90 legislators who also served when Janet Napolitano was governor from 2003 to 2009.

But even the lessons they learned in how to deal with an opposition executive might not be terribly useful, given the changes in Republican politics since then. Two shifts stand out most: Republican majorities are now razor-thin, only a single seat in each legislative chamber, and the GOP caucuses are considerably more conservative than they were in the early aughts.

That’s a recipe for potential disaster, said Wendy Baldo, a former longtime state Senate staffer who worked as chief of staff for 13 years before retiring at the end of 2021. Politics now punishes pragmatism and compromise, but there’s no way around either of those if lawmakers are serious about doing their jobs — particularly passing a budget, their sole constitutional duty, Baldo said.

“You have to be willing to compromise,” she said. “You have to recognize that you can’t always get what you want.”

Republican leaders in 2004, Napolitano’s second year, learned the hard way what happens when you don’t. After months of budget negotiations, Republicans in the state House of Representatives wouldn’t budge on their conservative spending demands, and they rejected a framework budget agreed to by the GOP-controlled Senate and Napolitano.

You have to work hand-in-hand with people who don’t share your policy goals. Unless they do that, they’re going to get rolled, one way or another.

After a lengthy stalemate, a group of more moderate Republicans (who dubbed themselves the “Mushroom Coalition” because their leaders kept them in the dark and fed them manure) took matters into their own hand and struck a deal with Napolitano and legislative Democrats. When it became clear that spending plan had the votes in the House, the Senate fell into line, and House GOP leaders were left cut out entirely.

Baldo said she’s been thinking a lot about that situation since Hobbs won the governor’s race last year, and said today’s Republicans risk repeating history if they don’t learn the lessons from nearly 20 years ago.

“You have to work hand-in-hand with people who don’t share your policy goals,” she said. “Unless they do that, they’re going to get rolled, one way or another.”

Chuck Coughlin, a longtime lobbyist and president of Arizona High Ground, believes that both Republicans and Democrats are more ideologically driven now than they were when Napolitano was governor.

Coughlin, who described himself as a “Gerald Ford Republican,” said that Napolitano’s deal-making skills played a part in the compromises she reached with the Republican legislature at the time — but he’s not sure Hobbs will be able to do the same.

“I think part of that Republican caucus is going to look at compromise as a loss, and they’d rather just not pass anything,” he said.

After so long of Republican rule, it can be difficult to operate in a new political environment, said Bob Robson, a Republican who served 14 years in the state House during two different stints. When Robson arrived at the Capitol in 2001, Republican Jane Hull was governor. But for his second term, Napolitano had become the state’s executive.

The change was a “major, major shift” for returning Republicans. They may not have seen eye-to-eye with Hull on everything, but they largely agreed on the big issues, and negotiations were often a matter of fine-tuning a proposal. But with Napolitano, GOP lawmakers were now dealing with someone who had a much different view of government and spending.

“It was exceedingly difficult,” he said. “And if you look at this legislature, it will be even more difficult, because you only have 31 and 16 Republicans.”

Robson said those slim margins make it impossible for Republicans to operate the way they have in the Legislature for years, requiring that bills get the votes needed to pass only from the GOP caucus.

“Extremes will get you nowhere if they stay that way,” he said. “At some point, there will be an uprising. You can’t bottle that up for too long.”

While displaying caucus unity is important for solidarity when the legislative session begins, Robson said Republican leaders will eventually have to shift to a bygone model of the past if they hope to succeed and let bills advance if they have 31 or 16 bipartisan votes, as long as a majority of those votes are from Republicans.

Reaching that point is hard, said Bob Burns, a Republican state legislator from 1989 until 2011. A longtime chairman of the powerful Appropriations Committee, Burns also served as Senate president for his final two years in office.

The hardest part about taking on those leadership roles, he said, is realizing that your personal priorities might not be shared by your colleagues — or by the governor, particularly when that governor is in the opposing party.

“You have to be flexible to some extent. You may not want to be, but you have to be,” he said. “You have to get to 31, 16 and one. That’s your job as leadership. And it doesn’t always fit your vision.”

Getting to a solution, particularly on the state budget, is a slow and painstaking process that Burns called “a balancing act,” even in the best of times.

“At some point, you recognize deadlock,” he said. “That’s when you say, ‘I can’t get them all. It will never happen. We have to get who we can get.’ It’s a never-ending cycle of negotiation. It’s a brutal process.”

Extremes will get you nowhere if they stay that way.At some point, there will be an uprising. You can’t bottle that up for too long.

The most important thing that the incoming Republican leaders can do is to recognize the power that Hobbs has as governor, said John McComish, a GOP leader in the state House during Napolitano’s final years as governor.

“The first thing the Republicans need to realize is they’ve got a vetoing governor — and an equal partner on the budget,” he said.

Coughlin believes that there are Republican members of the legislature who know how to compromise and get a budget passed, but they will first have to wait for some of the new, eager members to propose bills that are all but certain to be vetoed. Then those that are willing to compromise can work on bills that might garner more bipartisan support, Coughlin said.

The threat of vetoes is not an idle one. In her tenure, Napolitano vetoed 202 bills, including a whopping 58 in 2005 alone. Hobbs has already said that she only wants to see legislation come to her desk that has bipartisan support in the legislature, not the GOP-only provisions that were largely delivered to her predecessor, Gov. Doug Ducey.

Whether the Republicans will heed that warning remains to be seen, but the increasing extremism in modern politics is a sign that Hobbs likely should get her veto stamp ready, said Daniel Scarpinato, a Republican political consultant and veteran of the Ducey administration, where he finished his tenure as chief of staff.

“I think it is probably going to be a bloodbath of (vetoes), and I think that it will probably exceed Napolitano,” he said.

While there will undoubtedly be bills sent to Hobbs designed to get a veto in order to score political points, Scarpinato said Republicans would be wise to be more strategic in what they send to Hobbs. That would let them campaign in 2024 as “a check and a balance” on Hobbs’ administration.

But what will damage that effort, he said, is continued Republican infighting, especially on the budget. Public squabbling amongst themselves will only give Hobbs more advantage in the negotiations.

Marilyn Rodriguez, a lobbyist with Creosote Partners, believes Hobbs has a smart strategy in “leaving her door open” for compromise with Republicans.

Rodriguez predicts that, if Republicans in the Arizona legislature refuse to work with Democrats and no lawmaking is accomplished this session, they’ll be setting Democrats up to win the legislature in two years and “have a trifecta” to control both legislative chambers and the Governor’s Office.

There’s a good example of that happening in Michigan, she said: After two years of  Republicans blocking legislation favored by Democratic Gov. Gretchen Whitmer, Democrats won both houses of the state legislature in November.

I think it is probably going to be a bloodbath of (vetoes), and I think that it will probably exceed Napolitano.

But Rodriguez thinks that, at some point this session, a Republican legislator will break from the caucus to work with the Democrats, because legislators ultimately want to pass laws.

“Eventually, somebody’s going to give in and want to say that they brought something home to their constituents,” Rodriguez said. “This is a guess, but those politicians are more likely to be the ones that are already bucking this caucus trend to go nuclear, before they’ve even had a chance to try to work together.”

But she also thinks that it’s going to take a long time for legislators to find a middle ground.

“I think it’s going to be a long session where most everything, if not everything, gets done during the budget,” Rodriguez said. “This legislature is really hostile. They have been, especially to Democrats, whether or not Democrats are bringing them something they agree with.”

Barry Aarons, a veteran lobbyist who’s been in the business for more than 50 years, warned that progressives shouldn’t assume that Hobbs will veto every right-of-center bill that comes across her desk. He remembers when Napolitano told progressive lobbyists that she couldn’t just veto every single Republican-backed bill and asked them to point out which bills were “most egregious” and which ones they thought they could live with.

Aarons added that it’s difficult to predict exactly what will happen in the upcoming session with so many new faces and the new dynamic between the legislature and the governor’s office.

“I think the legislature, over the next 60 days, has to kind of find its own personality for this session, and we’ll see how that happens,” Aarons said. “Everybody needs to be patient and I think everybody’s expectations need to be tempered a little as to what can get accomplished, at least in this first year while we’re figuring out the dynamic of how things are going to work.”

Jerod MacDonald-Evoy contributed to this report.