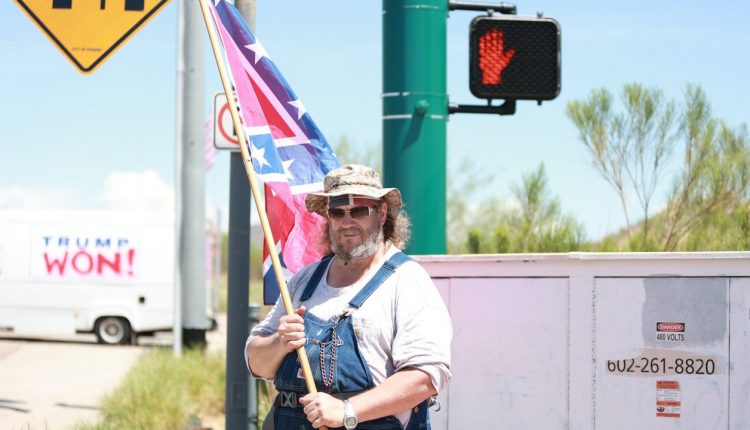 Protesters outside of the FBI Phoenix office on Aug. 13. Photo by Sean Campbell

PHOENIX – Signs reading “Honor your oath” and “Abolish FBI” were seen outside the FBI office in Phoenix on Aug 13, just days after news broke that the agency searched former President Donald Trump’s Mar-a-Lago home in Florida.

Several of those who were there were armed with guns.

Photographer Sean Campbell took the photos around 9:40 am He says by 11:30 am, several were leaving.

FBI agents seized classified records from Trump’s home during the agency’s unprecedented raid on Aug. 8, including some marked as top secret, according to a warrant and property receipt.

Trump disputes the classification, saying the records have been declassified.

According to the warrant, reviewed by Fox News, US Magistrate Judge Bruce Reinhart signed the warrant on Aug. 5, giving the FBI authority to conduct its search “on or before August 19, 2022,” and “in the daytime 6:00 am . to 10:00 pm”

The warrant and property receipt were formally unsealed on Aug. 12 by Reinhart.

MORE: Trump pleads the 5th. What does it mean? Here’s what you should know about the constitutional right he invoked

“The locations to be searched include the ’45 Office,’ all storage rooms, and all other rooms or areas within the premises used or available to be used by FPOTUS and his staff and in which boxes or documents could be stored, including all structures or buildings on the estate,” the warrant states, but did not give authority to agents to search areas being occupied by Mar-a-Lago members or not used by Trump and staff.

The warrant agents gave the authority to seize “all physical documents and records constituting evidence, contraband, fruits of crime, or other items illegally possessed” in violation of US Code, including documents with classification markings and presidential records created between Jan. 20, 2017 and Jan 20, 2021.

Trump posted on his TRUTH Social account on Aug. 12 that the documents were “all declassified.”

“Number one, it was all declassified. Number two, they didn’t need to ‘seize’ anything,” Trump posted. “They could have had it anytime they wanted without playing politics and breaking into Mar-a-Lago.”

Trump added, “It was in secured storage, with an additional lock put on as per their request.”

“The Biden administration is in obvious damage control after their botched raid where they seized the President’s picture books, a ‘hand-written note,’ and declassified documents,” Trump spokesman Taylor Budowich told Fox News. “This raid of President Trump’s home was not just unprecedented, but unnecessary–and they are leaking lies and innuendos to try to explain away the weaponization of government against their dominant political opponent. This is outrageous.”