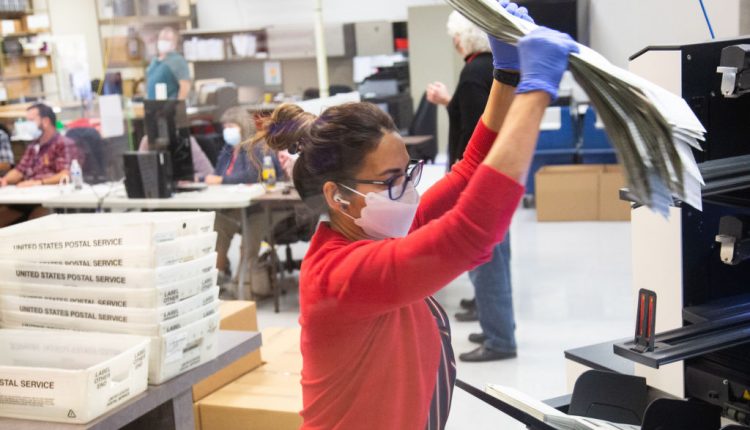 A new law barring elections officials from accepting private grants was fueled by conspiracy theories about money donated by Facebook founder Mark Zuckerberg, but no one in Arizona seemed to notice or care that movie star and former California Gov. Arnold Schwarzenegger also gave money to help Maricopa County conduct elections in 2020.

The USC Schwarzenegger Institute sent roughly $42,000 to Maricopa County for the purpose of beefing up temporary staffing for drive-through ballot drop-off locations on Election Day. Schwarzenegger said he wanted to help Maricopa County as well as 30 other counties across the country as a repayment for the kindness he has seen in the U.S. as an immigrant-turned-citizen.

“As someone who has been a fanatic about voting since I became a citizen in 1983, I want every American to have equal access to the right to vote – yes, even the people who voted against me,” he wrote in a September 2020 letter to election officials asking them to apply for his grants.

He noted how a lack of funding — in addition to COVID-19 — caused many polling locations to shut their doors. Fixing that, he said, is a nonpartisan issue. Schwarzenegger is a registered Republican.

Maricopa County received $3 million in grants from Schwarzenegger’s foundation and the Center for Tech and Civic Life, which Zuckerberg and his wife funded, but spent just shy of $2 million, according to a recent report from the Arizona Auditor General. The report also found that there was no wrongdoing or basis for concern over how the money was spent.

Still, the conspiracy theories that CTCL money was used for nefarious purposes drove the Arizona legislature last year to ban elections officials in the future from accepting private grants to pay for elections operations.

All of the legislative debate around House Bill 2569 in 2021, sponsored by fake Donald Trump elector and state Rep. Jake Hoffman, centered on CTCL grants. Schwarzenegger’s funding was never mentioned.

That’s notable because, even though CTCL provided more funding, only Schwarzenegger’s was targeted for specific uses, as first noted by Votebeat’s Jessica Huseman.

Huseman pointed out that there are legitimate issues surrounding private grant funding for elections and provide a reason to ban them entirely — as Arizona did — which highlight the real issue of underfunding the election programs. But the money from CTCL was spent in the way that counties saw fit. Schwarzenegger’s grants could only be used to open polling locations.

“Unlike Zuckerberg’s $400 million, Schwarzenegger’s money — which came in at just under $2.5 million — was doled out in response to years of progressive advocacy around polling closures affecting communities of color,” Huseman wrote. “He distributed the money only in states that, because of a history of racial discrimination in voting, were formerly required under the Voting Rights Act to seek permission from the Department of Justice for polling place reductions and voting changes. The Supreme Court struck down that requirement in a 2013 decision, Shelby County v. Holder, prompting an outcry.”

A day before Election Day, Schwarzenegger called then-recorder Adrian Fontes and fellow county elections officials to discuss the importance of what he was doing.

Between complimenting each other for advancing democracy, Schwarzenegger talked about becoming an American citizen in 1983 and getting the opportunity to vote for the first time.

“This is why I’m kind of a fanatic about the subject of voting and making sure that everyone has a chance to vote,” he said, before talking about how well Maricopa County was handling early voting with drop boxes.

“I play the action heroes in a movie, but you’re the democracy action heroes,” Schwarzenegger told the county officials on the line. “You’re really fighting to make sure that everyone’s voice is being heard.”

Maricopa County spent the Institute’s money on 13 of its 15 drive-through ballot drop-off locations, which included many sports venues like the Cardinals’ State Farm Stadium in Glendale and seven Cactus League stadiums, ranging from Surprise to Mesa.

After the call on Nov. 2, Fontes tweeted his thanks to Schwarzenegger, who responded that Fontes is a “a democracy action hero.”

Fontes lost his re-election bid to Stephen Richer, a Republican, and is now seeking the Democratic nomination for Arizona Secretary of State.

When Gov. Doug Ducey signed the bill in April 2021, only days before the Senate’s “audit” began at Veterans Memorial Coliseum, he said he didn’t see a problem with third-party groups engaging in advocacy to encourage people to vote.

“But the mechanics of elections cannot be in question, and, therefore, all third-party money must be excluded going forward to avoid any possible allegations of wrongdoing,” he said.

Should You Worry About Data From Your Period-Tracking App Being Used Against You?