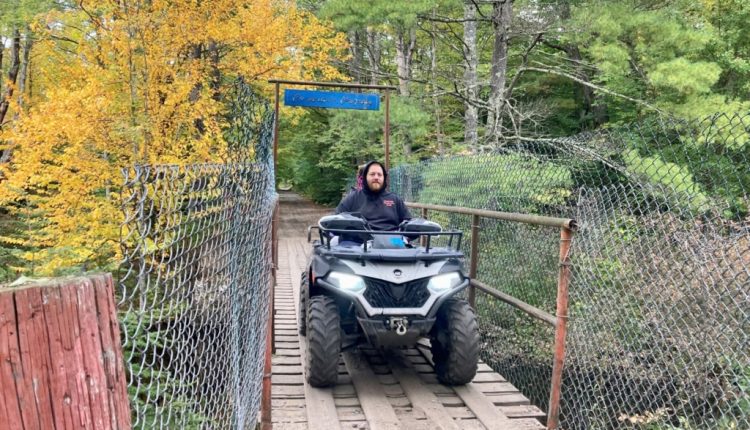 As ATVs in Maine hit record numbers, clubs get to work on trails

Sanford ATV Club members Matthew Leggett, left, and Anthony Holmes, right, ride in Sanford in a side-by-side that is 64 inches wide. The bridge’s width is legal but clearly a tight squeeze for the 65-inch machines that are now legal on Maine’s ATV trail system. Leggett hopes to work with the town of Sanford, which owns the bridge, to replace it in order to better accommodate larger side-by-sides that are growing in popularity. Deirdre Fleming/Staff Writer

SANFORD — Five years ago at a Sanford town meeting about the degraded nature of the Mousam Way multi-use dirt trail that cuts through the town, several local ATV riders stepped forward to help. They formed an ATV club and went about fixing that trail and others to help boost an outdoor sport that’s booming in Maine.

York County’s newest ATV club now has more than 350 members and serves as but one example of the growing off-road sport in Maine that saw a record number of registered ATVs last year with 82,322.

The number of registered ATVs in Maine last year was up 5 percent from 2021, continuing a trend that goes back at least a decade. Since 2012, the number of ATVs in Maine has climbed 32 percent. That’s despite the fact that about a quarter of ATVs in Maine are side-by-sides, the larger machines that can hold anywhere from two to six riders, making it possible for an entire family to now own only one machine.

Many involved in the sport think the growth will continue in Maine, which boasts one of the nation’s largest ATV trail systems with 5,800 miles of trails.

Since Maine passed a new ATV law last year requiring the widening of trails from the traditional 60-inch width to 65 inches, ATV clubs in the southern half of the state have gotten to work to expand the trails. The money to improve and widen trails comes from a $25 increase in registration fees that was imposed by the legislature.

In northern Maine, where roughly 90 percent of the trails already meet the 65-inch requirement or surpass it, riders are excited about the synergy taking place around the sport in Maine.

“Every year registration has grown. I’m 71 and I go all the time,” said Dick Howlett, the president of the Presque Isle ATV Club for the past 18 years.

The new law mandates that ATVs on the state trail system be no wider than 65 inches and weigh no more than 2,000 pounds. The new law was needed to address the side-by-sides that are growing in popularity. Side-by-sides have a cab, like a car, and can run as wide as 70 inches and weigh as much as 2,000 to 3,000 pounds, making them look far different from traditional ATVs that hold only one or two riders who ride them like a dirt bike.

The Bureau of Parks and Lands, which oversees the state trail system, developed a “best management practices” standard for the trails that all clubs now have to meet in the trails they maintain. As a result, some trails have closed until they meet the new standard. Still many feel the new requirements signal positive changes in the sport.

Matthew Leggett, left, and Anthony Holmes ride on a section of the state’s ATV trail system that the Sanford Maine ATV Club maintains—and a section that was recently improved. Deirdre Fleming/Staff Writer

“It will be interesting to see if the growth trend continues or if there is a downturn due to the fee increase, but so far registration seems strong,” said Brian Bronson, the Maine state supervisor of the Off Road Recreational Vehicle Program.

“It’s going to be a bit of a slow process since we can’t fix everything overnight. Getting permission for larger machines and then changing the gates and bridges to accommodate larger machines takes time and money. Some clubs have embraced the change and applied for grants and are actively working to improve and widen the trails, and others have been slower to respond. But there are examples of real progress, and we’re excited to see more next year.”

The Moosehead ATV Club in Greenville, the Flagstaff ATV Club in Eustis, the Star City ATV Club in Presque Isle and the Sanford club are some of the clubs that have stepped up to make significant improvements right away.

“We work very hard to keep good relations with the landowners,” Dunlap said of the private land the trails cross.

The cost of doing the work – renting the equipment and buying materials – is not cheap. Maintaining the 122 miles the Flagstaff club manages can run as much as $80,000 a year, Dunlap said. But it’s worth it, she added, because it’s clear that side-by-sides will soon cover the ATV landscape.

“Everybody is buying the wider machines. What I like about it is the fact more family members can get out on the trail,” Dunlap said, noting she sees people in their 70s and 80s out on the trails more than she once did.

The Sanford Maine ATV Club fixed or improved several bridges this year along the 11 miles of trail it maintains. Deirdre Fleming/Staff Writer

In southern Maine, the Sanford Maine ATV Club has received $31,000 in state grants to fix two trails and rebuild two bridges along the 11 miles the club maintains. The club also created ATV safety videos for social media. And there’s more work ahead to improve and expand the trails, said Matthew Leggett, the club’s president.

Leggett said next year the club hopes to work with the town to replace and widen a bridge over a stream used by snowmobilers that could run as much as $50,000 to replace.

“We’ve been active in making safety videos on how to make maps and apply for grants. Other clubs haven’t traditionally done this. We’re also trying to show them how, to help them gain new members,” Leggett said.

Because many of the Sanford club’s founding club members are young, they started using social media right away to draw new members, many who are from other states. They plan to put up a kiosk along the trail in town with a QR code so riders who pass it can simply download maps – and join the club right on their phone if they choose. Leggett also has tried to Encourage other ATV clubs in Maine to apply for municipal grants, in addition to state grants.

He said it’s all led to great enthusiasm in the Sanford club.

“I bought this side-by-side three weeks ago so my 5-year-old daughter and wife could ride,” said Anthony Holmes of York, a member of the Sanford club, as he rode his new $28,000 machine along the Mousam Way Trail last weekend.

“I rode last week for 10 hours. We trailered up to Andover (in Oxford County) and rode around there. My back would hurt after 10 hours of riding on a (two-seater) but not in this. This is an easier ride. And my entire family can go out together.”

Please check your email to confirm and complete your registration.

Use the form below to reset your password. When you’ve submitted your account email, we will send an email with a reset code.