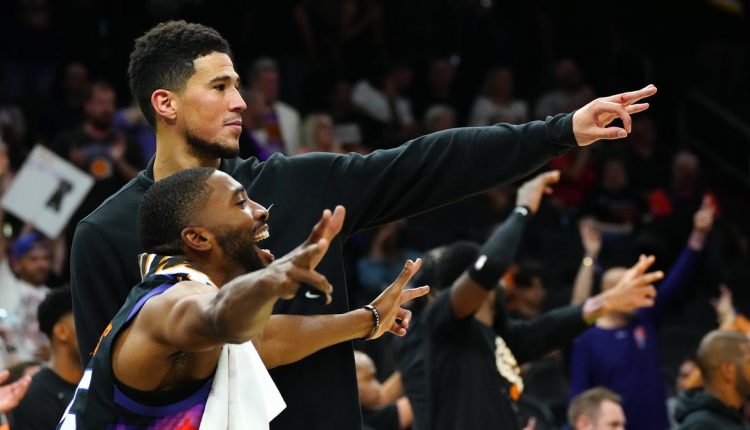 As of right now, Phoenix Suns expected to spend $34.8M in luxury taxes

The Phoenix Suns have already exceeded the luxury tax threshold of $150.267 million for the 2022-23 season and currently have an expected luxury tax bill of $34.8 million.

With the NBA salary cap set at $123.655 million, the Suns have $167.1 million in player salaries with restricted free agent Deandre Ayton re-signing this week after Phoenix matched a four-year, $133-million offer sheet from the Indiana Pacers.

Phoenix has 14 players under a standard contract for the upcoming season. Teams can have up to 15 standard players and two 2-way players.

The Suns last went over the luxury tax threshold in 2009-10.

Phoenix has previously paid the luxury tax four times, shelling out a total of $15.6 million.

The Suns are expected to surpass that for the 2022-23 season alone as they are currently at $16.8 million, but is this team capable of winning an NBA championship to really make this unprecedented spending by the franchise worth it?

Depends on how one looks at it.

From an optimistic perspective

The Suns essentially have the same roster that won a franchise-record 64 games under 2021-22 NBA Coach of the Year Monty Williams.

They earned the No. 1 overall seed, but their historic season ended abruptly in the Western Conference semifinals.

The returning Suns should be highly motivated to get back to the finals.

JaVale McGee is the only player from last season’s rotation no longer with them as the unrestricted free agent signed a three-year, $20.1-million deal with the Dallas Mavericks.

Devin Booker is coming off a career year in which he made first-team All-NBA. He’s one of the game’s best players, an elite scorer and an improved defender.

His All-Star backcourt mate, Paul, remains one of the NBA’s top point guards and leaders. He’ll continue to hold himself and his teammates to a higher standard.

Ayton has averaged a double-double in each of his four NBA seasons and could be primed for a breakout year that leads to a first All-Star nod.

Mikal Bridges was runner-up for NBA Defensive Player of the Year while Johnson finished third in the league’s Sixth Man of the Year voting.

They have room to grow offensively, but Bridges is an emerging two-way player while Johnson is one of the league’s best 3-point shooters.

Jae Crowder is a glue guy and leader who can knock down 3s and defend.

Landry Shamet should be more comfortable in his second season in Phoenix, Torrey Craig is a utility guy and Bismack Biyombo can serve as that backup five to Ayton.

Damion Lee and Josh Okogie are solid wings the Suns added while Jock Landale is a serviceable big who can contribute when needed.

Plus Dario Saric is expected to be ready for training camp after missing all last season returning from a torn ACL suffered in Game 1 of the 2021 NBA Finals.

The Warriors are favored to repeat as NBA champions.

The Clippers and Nuggets will be right there if they’re healthy.

The Grizzlies and Mavs aren’t going anywhere, but the Suns were better than all of them last regular season with essentially the same group returning.

From a critical perspective

This is also essentially the same team that needed six games to eliminate New Orleans, which had to win twice in the play-in for the eighth seed.

Phoenix then blew a 2-0 series lead to Dallas.

The fourth-seeded Mavericks won Game 7 by 33 points in Phoenix.

Paul looked 37 and was reportedly bothered by a quad injury to continue his string of setbacks while Booker once again dealt with hamstring issues during the season.

Ayton scored a career playoff low five in Game 7 and had a verbal spat with Williams.

They should move forward, but do the Suns trust Ayton to run the offense through him in close games or can Ayton earn their trust to show he can deliver in those moments?

Doncic got the best of Bridges for much of the series, leading Williams to try the undersized Paul on Doncic in Game 7.

Bridges also failed to make Dallas pay for focusing on Booker and Paul in two closeout games. He shot a combined 5-of-18 for a total of 13 points in Game 6 and Game 7.

Johnson hasn’t proven to be a consistent rebounder at the four while Crowder is a streaky shooter from 3 and doesn’t look like the same defender he’s been.

The Suns had dips in their play when Payne replaced Paul.

Where will Craig, Lee and Okogie reside in the rotation?

Should Saric be expected to play well right away after missing an entire season?

The Suns want to miss McGee, too. The 7-footer played above the rim, an emotional leader and defensive presence backing Ayton.

Maybe Phoenix’s championship window has closed considering how the rest of the conference looks going into 2022-23.

Although Phoenix is ​​entering unchartered territory in the luxury tax, the franchise isn’t even close to spending like the defending NBA champions.

The Warriors had a salary payroll of $175 million for their 2021-22 championship squad which led to spending an additional $170 million in luxury taxes.

Golden State won it all for the fourth time in eight seasons and is favored to repeat, but team owner Joe Lacob isn’t feeling the league’s luxury tax system.

The NBA fined Lacob $500,000 for his comments on the Point Forward podcast with Andre Iguodala and Evan Turner about the luxury tax.

“I think it’s a very unfair system because our team is built by — all top eight players are all drafted by this team,” Lacob said on the podcast.

If the Suns keep exceeding the luxury tax in the next few years, team owner Robert Sarver may publicly complain, too, even if they win their first NBA title.